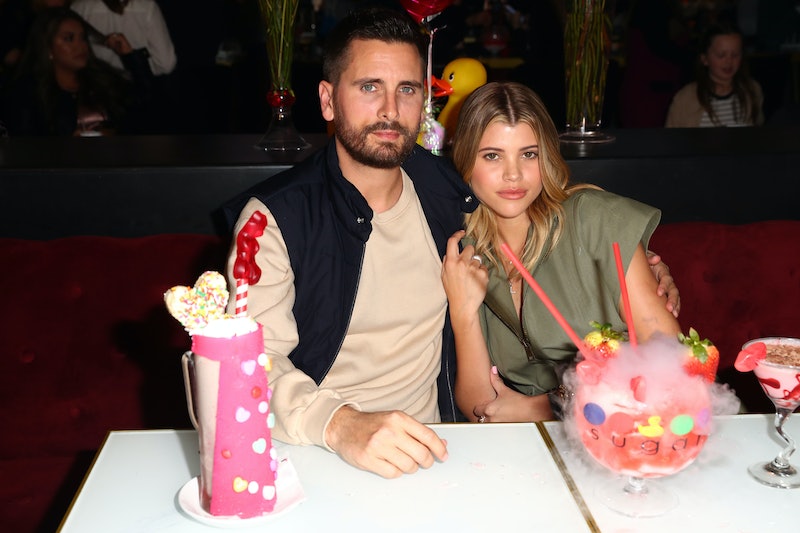 Could it be? Are they actually ready to tie the knot? If so, will they televise the wedding during an episode of Keeping Up With The Kardashians? Fingers crossed. After dating for close to two years, Scott Disick and Sofia Richie might be getting engaged soon, according to a source for Us Weekly. Not only that, but it sounds like Kourtney Kardashian — Disick's ex and mother to their three children — is totally on-board with them walking down the aisle. (Bustle reached out to reps for Disick and Richie for comment, but did not receive an immediate response.)

Disick and Richie have been together since sometime around September 2017. Richie has long-been a friend of the extended Kardashian-Jenner family, which — paired with her and Disick's almost 15-year age gap — caused some fans to raise their eyebrows at first. Their relationship has only gotten stronger since then, though, and now it seems as if they could be ready to take the next step.

According to multiple sources for Us Weekly, Disick and Richie "have talked seriously about getting engaged," one of the insiders claimed. "It’s a real possibility." A second source for the outlet revealed, "As it is now, Sofia and Scott look at each other as life partners," adding that they "are in a great place and stronger than ever."

Now, this report might be worth taking with a grain of salt, seeing as how a conflicting source told Us Weekly back in January that, "It’s more likely that [Richie] gets pregnant before they get engaged." So, wait — maybe Disick is ready to propose because Richie is pregnant? Just kidding. That is a completely unfounded hypothesis, by the way, and exactly how rumors get started.

Anyway, if the pair *has* decided that they're ready to become Mr. and Mrs., it doesn't seem like that'd bother Kardashian at all. A source for Us Weekly recently explained that Disick's ex is "unbothered by the idea of them getting engaged," and "they’d [even] have her full support." That could be due, in part, to the fact that "Sofia is really so good with his kids and she has a good friendship and relationship with Kourtney," the source added.

Kardashian actually said that she'd be fine with it months ago. During an appearance on Watch What Happens Live With Andy Cohen back in January, Cohen addressed the eldest Kardashian sister with a question from a fan that read, "Kourtney, there are rumors that you are terrified of Scott Disick proposing to Sofia Richie ... What would be your reaction if they got engaged?"

Think that threw her for a loop? Nope. Not one bit. In fact, Kardashian could not have seemed *less* unfazed. In response, the star just smiled and told Cohen that her response would be, "Congratulations."

As of right now, it's unclear whether or not the latest round of engagement rumors about Richie and Disick are true. One thing's for sure, though: If they do decide to tie the knot, it'll be a happy occasion all-around.