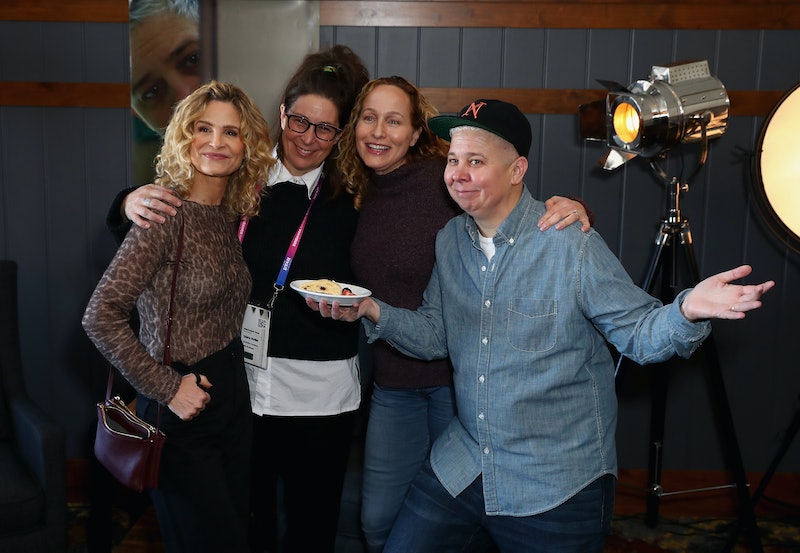 "Truly, people get excited by that name," actor/producer/director Kyra Sedgwick says when I compliment the title of the production company that she launched with her partners late last year. She, Meredith Bagby, and Valerie Stadler have dubbed themselves Big Swing Productions, and that's exactly what they're taking with their first slate of film and TV projects. "I'm 53," Sedgwick says proudly, noting that her collaborators are also her peers. "We’re not asking permission anymore. We’re gonna take big swings that maybe people think are outside of our purview."

Sedgwick is at the Sundance Film Festival with the series Girls Weekend and its creator/star Ali Liebegott; a 10-minute excerpt of the timely family comedy (which Sedgwick also directed) was screened as a part of Sundance's Indie Episodic program. She notes that Sundance isn't known yet for being a big point of sale for TV — this is only the second year the Indie Episodic program has even been a part of the Park City, Utah event — and indeed, there's been no announcement yet that Liebegott's semi-autobiographical series has been purchased by a network or streaming service. But the mini-episode serves as a sharp, funny, character-driven calling card for Big Swing and the type of work Sedgwick and her partners want to put out into the world. According to their Twitter bio, "Big Swing celebrates new heroes and amplified bold voices, focuses on inclusive stories with heart and purpose."

"What we’re really doing is telling stories about people we’re interested in, and people that maybe we don’t normally see on TV and in the movies," Sedgwick explains.

"I've gone out on auditions, and there’s hardly ever a role for a butch that’s not embarrassing or isn’t a butt of a joke, isn’t just a surface thing," Liebegott says when the three of us meet in the cozy library of a hotel up in the mountains. "So there really isn’t this character on TV in a real fully formed way."

Liebegott has written and produced for The Conners and Transparent (where she also played Tiffany), and based Girls Weekend on her own experience being an out, queer woman trying to maintain a relationship with her conservative (and largely well-meaning) Nevada family. In the series so far, that includes her father (Ken Jenkins), cancer-stricken mother (Linda Lavin), and prickly, homophobic sister (Transparent's Amy Landecker, who Liebegott says she's been wanting to write for since they met on that series), though many more relatives and old friends will join the fray if Girls Weekend finds a home and continues.

The creator and star says that she hasn't shown her real family any of the show yet and tried not to anticipate their reactions when she was writing. Because trying to do that and honor the "truth of the characters" at the same time would have incapacitated her as a storyteller. But that's not to say that Girls Weekend has an I'm-right-you're-wrong mentality.

"To me, Girls Weekend isn’t about just me being an outsider in the family," Liebegott says. "It’s also that the family has all of these things that I don’t know that they have — these strengths. So it’s not like they’re bad and I’m good, it’s that we’re all flawed and compassionate and horrible and great."

Sedgwick made her directorial debut with the 2017 Lifetime movie Story of a Girl, and has since helmed a few TV episodes as well. She won't be directing all of Big Swing's upcoming slate, but says that she jumped at the chance to fill that role on this project, because she thinks Liebegott is a "genius" and also because she's drawn to stories that are "funny, funny, funny, sad."

"I’m fascinated by people’s families," Sedgwick continues. "If I’m talking to you for more than five minutes, I’m like, 'Where are you from? What’s your family like? Do you have any siblings?' I’m just a sponge for that sh*t, and that's exactly what this is."

Bringing Girls Weekend to life onscreen is an act of exposure for Liebegott, and Sedgwick didn't take that for granted. "To be able to work with Kyra and feel so held in the directing of this and to know that she understood the character and the depths of it and the humanity of it was a real gift," the Liebegott says.

"[Actors] already feel safe with me because they know that I know how f*cking scary it is to be in front of the camera," Sedgwick adds. "It’s so vulnerable, it doesn’t matter what kind of a role you’re playing. And if you’re playing something that’s close to you, it’s even more vulnerable."

Per Deadline, the rest of the Big Swing slate is as varied and bold as the evocative company name would suggest. The Authentics is a young adult series based on the novel by Abdi Nazemian about an Iranian-American girl who finds out that she's adopted. Based on a true story of the first NASA class of "civilian astronauts," The F**king New Guys is also being developed for TV. Sedgwick is on board to direct Taffeta, a classic love triangle rom-com revolving around a queer woman. Adaptations of the Imelda documentary and the novels The Summer of Jordi Perez and Aristotle and Dante Discover The Secrets of the Universe are on the way too. There's nary a straight, white, cisgender male protagonist in the bunch.

"I think if you’re a woman in power and you’re not reaching down and pulling somebody else up, you’re really not doing your job," Sedgwick says. "And I really want to create a safe space in whatever my work space is, whether I’m an actor or a director or a producer, I want everyone to feel safe and appreciated. I just think that brings out the best in people, and if they’re treated that way, they pay it forward. It’s crucial to me at this time in my life."