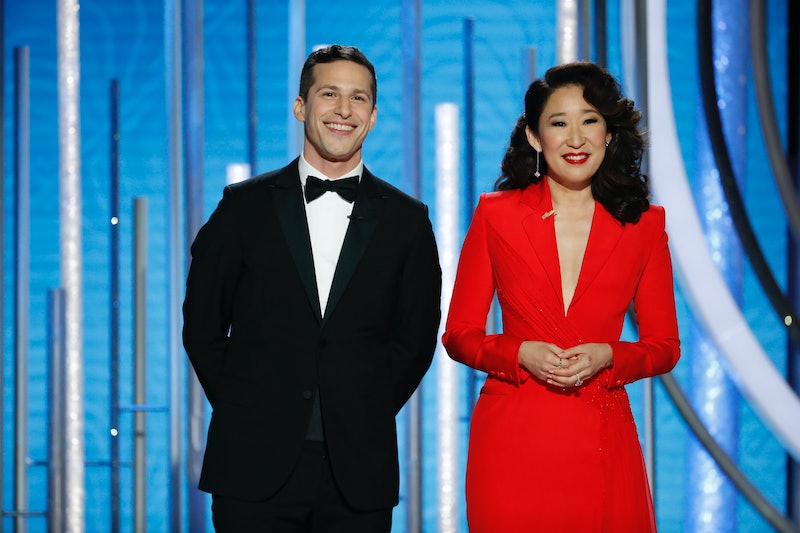 When reflecting on awards shows after the fact, there's plenty of talk about the acceptance speeches, the outfits, and the snubs. But what's really worth looking back on are the best memes of the 2019 Golden Globes. Let's just say a certain water bottle brand definitely stole the spotlight. Fiji Water Girl is already an icon, by Twitter's standards at least.

There could be 100 memes on the internet, and all you need is one to make you laugh out loud. (Yes, unless you've been living under a rock and missed Lady Gaga's favorite "there could be 100 people in a room" quote over the past few months, you'll know that's a play on another favorite line from the night.) Even Globes hosts Sandra Oh and Andy Samberg spoofed it in their opening monologue. Gaga got in on the fun and even shouted out, "It's true," in response.

So without further ado, here's a round-up of some of the best memes from this year's Golden Globes. Because when it came to trophies given out on Sunday night, someone should've gotten up on that stage to hand some out to the following people on Twitter. They truly deserve it.

A star is born, indeed. (That last meme mash-up even resulted in Busy Philipps tweeting, "BRAVO.")

Oh's parents definitely stole the spotlight, and leave it to Netflix to tie the precious pair into the ongoing Gaga-themed joke.

There were plenty of funny reactions to E! accidentally writing Jameela Jamil's name as her Good Place character's sister (Kamilah Al-Jamil). But Jamil herself being a good sport about it takes the forking cake.

Her face here is pure shock and joy. And sure, Close took home a trophy for The Wife, but to some '90s kids, she'll always be Cruella de Vil from 101 Dalmatians. That last tweet absolutely nails it.

Lots of random love for Malek on people's timelines.

A Win For Paddington 2 (Kind Of)

Twitter counted Ben Whishaw's win for A Very English Scandal to actually be a win for Paddington 2 — where he voices the beloved bear.

About That Best Screenplay Pick...

This The Favourite clip gets right to the point, as does that Crazy Rich Asians screenshot.

As mentioned above, this Gaga quote can't stop popping up. Honestly, it'll probably follow her forever. (Even Katharine McPhee got in on the fun with her Bradley Cooper selfie.)

It's impossible to top Streep, but John Krasinski being a proud husband definitely is up there.

Considering the 2019 awards season has only just begun, get ready for even more memes and hopefully even more "Meryl Streeping."