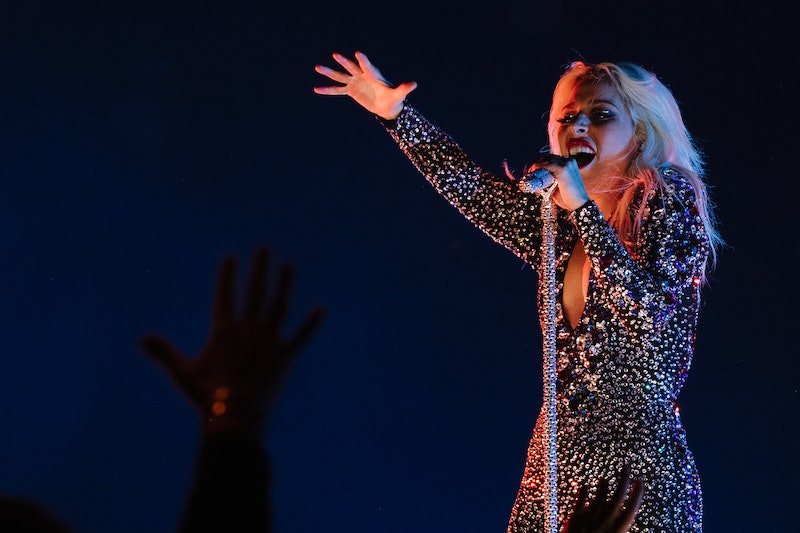 On Monday, June 24, Lady Gaga made history. Well, personal history. The "Shallow" singer performed at the Apollo Theater in Harlem of NYC for the first time ever, and since the venue has such an important history, the pop star took the opportunity to give a speech celebrating this milestone and LGBTQ Pride. Lady Gaga's speech about Pride and her journey to fame showed how much the singer hopes to inspire her fans to follow their dreams like she did.

Videos shared by fans on social media show Gaga addressing the audience while the guitar melody from "Shallow" played in the background. "I was just a girl in an apartment on the Lower East Side with a keyboard, but it feels so good to be here," she said. "I'm home and I'm with you and I know I like to change a lot, but you know, a lot of sh*t hasn't changed." The A Star Is Born star held out her arms and added, "certainly not my deep love and respect and gratitude for all of you."

As E! News reported, the Apollo Theater concert was an invite-only show for SiriusXM subscribers and Pandora listeners, but later when Lady Gaga honored WorldPride and the 50th anniversary of the Stonewall uprising, she addressed everyone, not just those in the audience. "I've learned something very important to ask people now, and I share this with everyone who's listening, not just in this theater but around the world. Ask the question: what is your pronoun?" Gaga said, inspiring a rousing applause from the audience.

After preaching about the importance of asking someone what pronouns they use, Gaga continued, "For a lot of people it's really hard and their pronoun's not respected, and they're not asked. For me, I've grown and changed over the years in different ways, I've felt misunderstood in different ways, all our hardships are different, I don't mean to compare. I just mean to say we're in this together and I've had a million reasons to want to give up. The singer, sitting at her keyboard, crossed her fingers and said, "But sometimes if you're luck, you just need one good reason to stick around."

While her moving speech, shared on Twitter by Variety, likely was timed as a lead-in to her hit song "Million Reasons," Little Monsters will probably pick up on the similarities between her message of finding one reason not to give up with the "100 people in a room" anecdote that Gaga used numerous times during her press tour for A Star Is Born. Even if the "100 people in a room" speech became a joke on the Internet, it's just because Lady Gaga so often takes the time to remind her fans to follow their dreams and to not give up.

During her June 24 performance when she was discussing the significance of returning to New York to perform at the Apollo Theater, Gaga said, "I used to sit in my apartment, write songs about fame and songs about boys, write songs about my family and I made it, and then they tried to take me down. I put my head back down and got back to work and then I looked up one day and I had a fu*king Oscar in my hand."

Standing at her keyboard, Gaga reminded her fans, "You can do anything that you put your mind to. Every time someone tells you no, you tell yourself a thousand times more 'Yes, I can do this.' Cause I'll tell you something. They thought my sh*t was shallow, but I look into all of your eyes and I feel this room and there ain't nothing in the world deeper than this."

Between speaking about how excited she was to perform at the Apollo Theater and her tribute to Marsha P. Johnson and WorldPride, the "Bad Romance" singer sure did give her fans a show. Oh, and there was plenty of singing, dancing, and costume changes to blow audiences away as well. It's a shame not everyone could see the Monday night show, but fans can catch her rocking the stage in Vegas during her Enigma show residency.