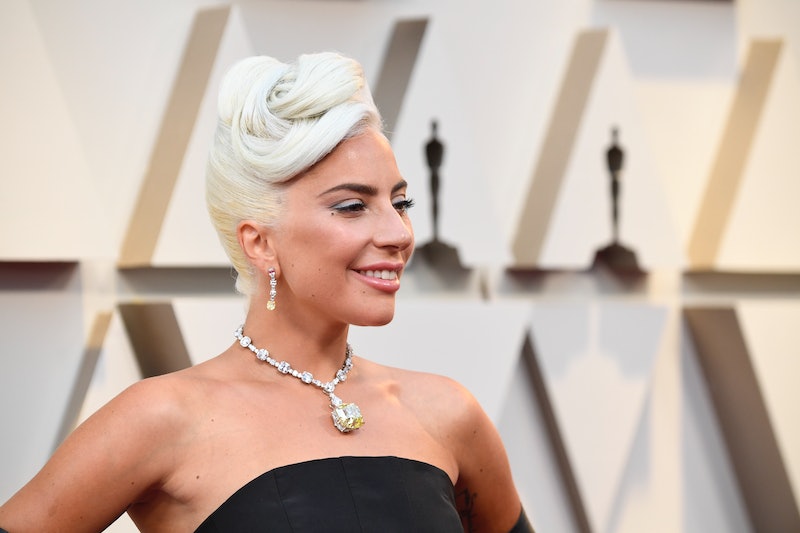 Lady Gaga's sartorially spectacular 2019 awards season in support of her work as Ally in A Star Is Born is coming to a close. She never missed the opportunity to serve up an unforgettable lewk while making the rounds. Lady Gaga's 2019 Oscars dress was a bit of a surprise — at first. Her not-so-LBD was clean and simple, by Gaga standards. Mother Monster was, in fact, stunning in a strapless black Alexander McQueen gown with a full skirt, complete with black leather, over-the-elbow gloves. The arm accoutrements were very, well, Gaga. However, she completed the look with a $30 million Tiffany necklace that totally looked like the "Isadora Diamond" that Andie Anderson wore in How to Lose a Guy in 10 Days. Really!

Given Gaga's penchant for red carpet high drama, her Academy Awards look differed from her other 2019 awards show presentations in that it was elegant and refined, rather than over-the-top and dramatic.

The diamond necklace stole the show, though. According to the press release Bustle received, Gaga wore the iconic, cushion-cut, and brilliant Tiffany Diamond. It weighs 128.54 carats, features over 82 radiant facets, and costs millions. It is one of the largest yellow diamonds in the world and was last worn by the late style icon Audrey Hepburn for the Breakfast at Tiffany's publicity photo shoot.

Gaga wore her white blonde hair in a twisted knot atop her head. That way, nothing, not even her hair platinum strands, interfered with the necklace.

Now that you've been besotted by Gaga's necklace, here's a look at the beautiful bauble that Andie Anderson wore in the beloved rom com.

You can see the similarities between both pieces of extremely expensive bling.

Gaga set the style bar exceptionally high early on during awards season with her periwinkle blue Valentino dress at the 2019 Golden Globes last month. Not only did Gaga pay homage to Judy Garland's dress in the 1954 version of the film for which she is nominated but she also matched her hair to her gown. The matchy-matchy move was typically and terrifically Gaga. Now that we've seen her Oscars ensemble, the Globes look will go down as her most dramatic of the season.

Gaga opted for soft, chic glam, courtesy of her defined waves and peach-tinted dress, at the 2019 Critics Choice Awards. It was a low-key for her, and that made it totally unexpected.

The singer and actor rocked '20s-style finger waves, oxblood lips, and a white-hot, Dior Couture dress with a slit-up-to-there at the 2019 SAG Awards. It was her edgiest of the 2019 awards show circuit.

Gaga went with a silver, disco ball-like dress with statement sleeves at the 2019 Grammys. It had an '80s vibe and she reveled in the retro-ness of it all.

Flashback to the 2016 Oscars where Gaga channeled Marilyn Monroe and Old Hollywood glam with a strapless white outfit.

The 2019 awards season was certainly full of moments — from personal to professional to sartorial — for Lady Gaga. Her career has been elevated to a whole new level. Her 2019 Academy Awards look was a beautiful way to cap things off.