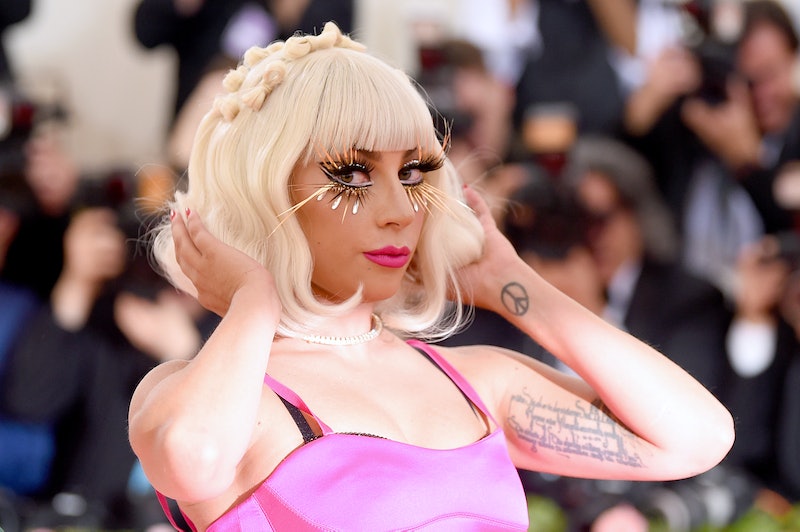 The 2019 Met Gala may be over, but there's still plenty to learn about the attendees' style moments. One of the biggest beauty moments from the night may have been Lady Gaga's Met Gala eyelashes, and not just because they were spiky and gold and camp AF. Turns out, Gaga's eyelashes were so heavy that her makeup artist Sarah Tanno had to use face tape to keep the singer and actor's eyes open. Maybe beauty really is pain?

While Gaga's full makeup look was stunning, the most show-stopping part was definitely her eyelashes, and at the event, Tanno explained that there was a lot more going on than just applying the spiky, golden lashes to Gaga's eye. Tanno actually had to use face tape to hold Lady Gaga's eyes open while she wore the lashes, and to get the exaggerated eye shape the star had, Tanno also used eye tape that was hidden under Gaga's wig. Yes, it's a lot, and yes, it's impressive AF.

If you're thinking that Lady Gaga simply took the lashes off once she was inside the Met Gala, then you clearly don't know the star's commitment to a look (or four since she, you know, rocked four different looks on the red carpet). According to Tanno, Lady Gaga rocked those ultra-heavy lashes for the full 8 hour event.

In fact, Lady Gaga wasn't just wearing those golden spikes. The foil lashes wouldn't be simply sit on top of the star's natural lashes given their weight. This mean that Tanno needed to add extra support to Gaga's eyes before applying them. The A Star Is Born actor is rocking not one, not two, but three pairs of false lashes underneath the golden ones just to act as a base and then held them to her natural lash line using mascara.

Impressed yet? You should be.

Of course, Lady Gaga's beauty look wasn't the only impressive part of her Met Gala look. The co-chair of the event went all out with everything from her sartorial choices to her hair.

Lady Gaga's look was designed by her long time friend Brandon Maxwell, and it wasn't just a single dress. Gaga's look was a transformation on the red carpet beginning as a voluminous pink smock dress with a massive train before transforming into a classic black dress with a single padded hip and umbrella accessory. Then, Maxwell revealed a hot pink, spaghetti strap Barbie-esque look with a brick phone and everything before she finally ended up in a sparkling black bra and panty set. Yes, it was a production.

Clearly, Lady Gaga left no fashion stone unturned for the 2019 Met Gala, and from her taped open eyes and metallic lashes to her bow hair style to her not one but four ensembles, Gaga may have just won the 2019 Met.