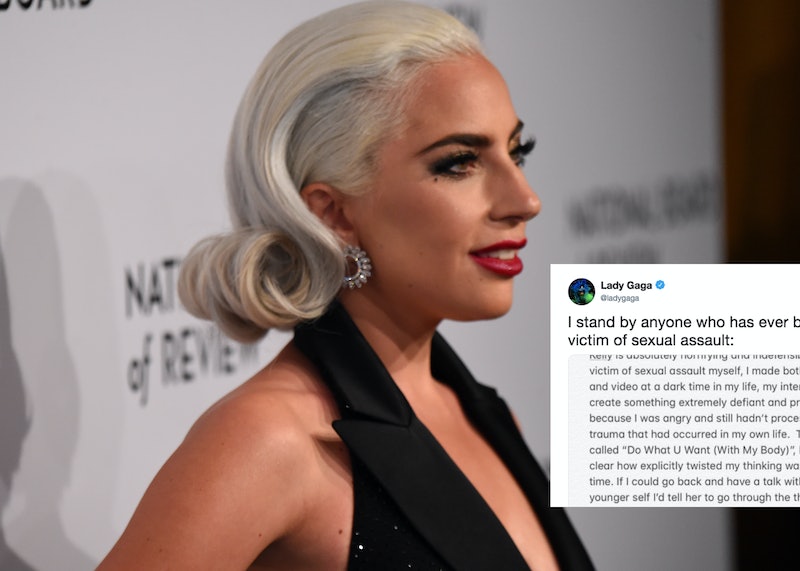 Since Lifetime's six-part Surviving R. Kelly documentary premiered last week, people have been reeling from hearing the women tell their stories of R. Kelly's alleged sexual assault and abuse. (The rapper has previously denied allegations against him.) Those who have worked with Kelly and chose not to participate in the docu-series, including Lady Gaga, have been receiving backlash, but now, she's setting the record straight. On Wednesday night, Lady Gaga spoke out against R. Kelly in a post on her Instagram Story and Twitter for the first time since the series aired. (Bustle reached out to Kelly's lawyer for comment, but did not receive an immediate response.)

UPDATE: As pointed out by 9to5Mac.com on Friday morning, Gaga and R. Kelly's "Do What U Want (With My Body)" has been removed from iTunes and Apple Music.

EARLIER: In 2013, Gaga released a song with Kelly called "Do What U Want (With My Body)." Now, not only is she denouncing Kelly's actions and sharing her support for the women who have shared their stories, but she also shared her plans to remove the song from iTunes and other streaming services.

"I stand behind anyone who has ever been the victim of sexual assault or violence. Period," Gaga wrote on social media before launching into a lengthy text post explaining what was going through her mind when she recorded the song with Kelly more than five years ago.

Gaga began by stating that she believes the women who came forward to speak out about Kelly in the Lifetime series, calling his alleged behavior "horrifying and indefensible." She went on to talk about her own sexual assault and how she was in a "dark time" when she recorded the song with Kelly.

"As a victim of sexual assault myself, I made both the song and video at a dark time in my life, my intention was to create something extremely defiant and provocative because I was angry and still hadn't processed the trauma that had occurred in my own life. The song is called 'Do What U Want (With My Body)', I think it's clear how explicitly twisted my thinking was at the time."

Back in 2014, Gaga revealed that she was raped as a teenager during an appearance on The Howard Stern Show, saying that she didn't want to be defined by what happened to her.

In her new statement, the singer went on to say that she wished her younger self at that time would've known what she knows now after being in therapy and that she'd encourage her to speak up sooner. Gaga continued:

"I can't go back, but I can go forward and continue to support women, men, and people of all sexual identities, and of all races, who are victims of sexual assault. I have demonstrated my stance on this issue and others many times throughout my career. I share this not to make excuses, but to explain."

Then, Gaga made clear how she plans to handle the situation going forward:

"I intend to remove this song off of iTunes and other streaming platforms and will not be working with him again. I'm sorry, both for my poor judgment when I was young, and for not speaking out sooner. I love you."

R. Kelly, who has maintained his innocence since BuzzFeed News' exposé was published in 2017, has yet to respond to Gaga's statement.