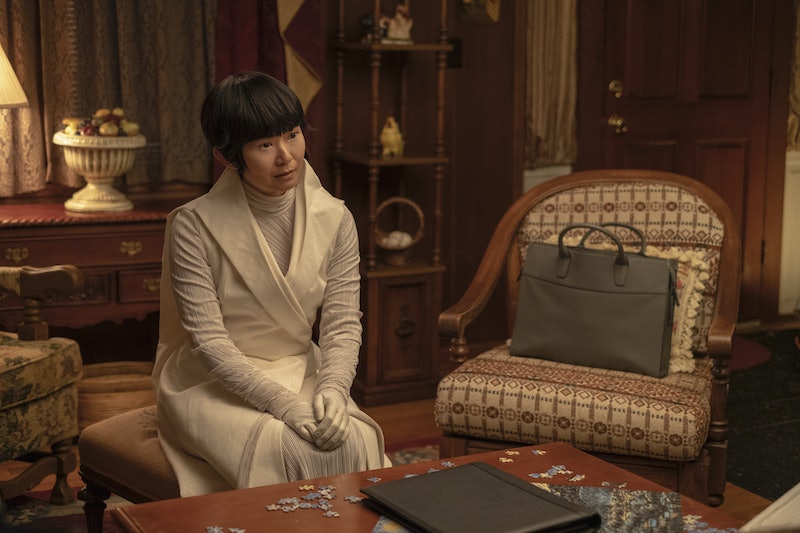 Spoilers ahead for Watchmen Episode 4. With the world believing Adrian Veidt is dead, the elusive Lady Trieu stepped in to fill his place. The HBO series introduced the woman who bought Veidt's company in Episode 4 — and she has quite the interesting ally since Lady Trieu and Will Reeves on Watchmen are working together. Watchmen didn't really let on how the trillionaire and the 105-year-old man became connected. But Trieu (Hong Chau) is helping Will (Lou Gossett Jr.) reach out to his granddaughter Angela Abar. That sounds rather nice and sentimental, but Will also seems to be involved in Trieu's Millennium Clock project and he states that what he's doing will betray Angela. And knowing Trieu's powerful influence, this mysterious clock will probably hurt many other people beyond Tulsa as well.

Lady Trieu's introduction in Watchmen shows her manipulating a couple into selling their land by using their struggles with infertility. So right off the bat, it's clear she'll use all of her resources to get what she wants. The industrialist's latest project has brought her to Tulsa and she claims her Millennium Clock is "much more than a big clock."

When FBI Agent Laurie Blake and Detective Angela Abar visit Lady Trieu about her company's involvement with Angela's car's disappearance, Trieu's daughter Bian tells them more about the Millennium Clock. Bian claims it will be "the first wonder of the new world" and says it's "a thousand miles from the nearest ocean, fortified and impervious to seismic activity and anything short of a direct nuclear blast." But when asked what it does, she simply replies, "It tells time."

Why that answer is infuriatingly vague, it is revealed that Will is involved with whatever this clock can do. He has made a deal with Trieu, who helped him get pills to his granddaughter. Trieu disapproves of him giving the pills to Angela and questions his commitment to their conspiracy. He acknowledges that Angela will be impacted by their plot — but it doesn't change his level of involvement. "I betrayed her and in three days, she'll know what I have done and she'll hate me for it," Will says to Trieu. "You're concerned about whether I am in. Well, I am in. All the way. Tick-tock, tick-tock, tick-tock, tick-tock."

Clocks and time are major themes in the Watchmen comics and the same goes for the HBO series. After Trieu reveals her clock will be ready in three days, Irma Thomas' "Time Is on My Side" appropriately plays over the end credits. But time might not be on Angela's side — or whoever else will be impacted by what this giant clock can do. After all, Trieu bought Adrian Veidt's company and Veidt was the man who dropped a squid on New York City and killed three million people. So viewers should be concerned about what Trieu's machine can do.

But besides the possible global ramifications this clock could have, Trieu also is assisting Will with his efforts to explain who he is to his granddaughter. In Episode 2, Angela asked Will why he was in Tulsa and he replied, "I wanted to meet you and show you where you came from." So a big piece of Angela's identity is mixed up in their scheme.

Why a powerful business magnate like Trieu would be working with Will is unclear, but the Abar-Reeves family share a connection to Vietnam with her. Angela revealed to Laurie that her parents died when she was little growing up in the U.S. state of Vietnam. And it's implied that Trieu suffered during the Vietnam War or its aftermath based on Bian's drug-enhanced dream of being in a village that was burnt down and then being forced to march.

It seems both Will and Trieu want to share their memories and past experiences with their offspring and future generations through scientific means. However, how Will's past will play into his decision to work with Trieu on this clock is something Angela — and viewers — have yet to discover. And while fans' curiosity may be satiated when the Millennium Clock's real purpose is revealed, if it's anything like the Doomsday Clock in the comics, it could mean global devastation.