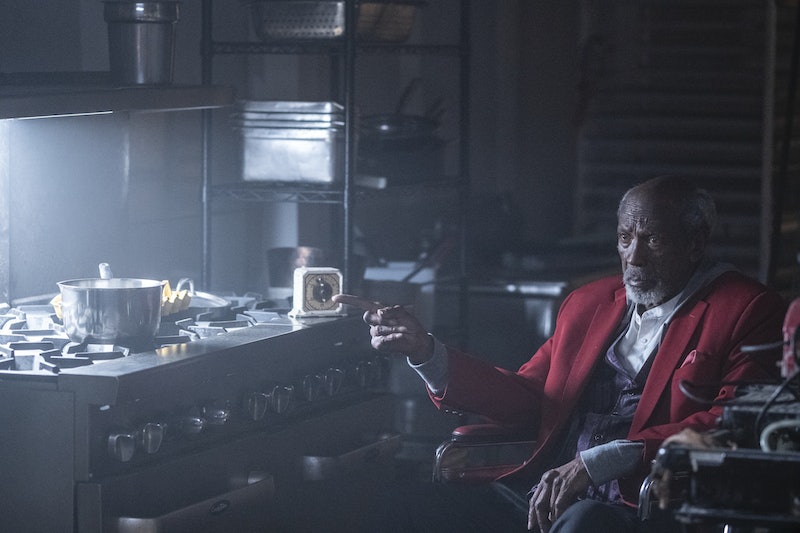 Spoilers ahead for Watchmen. HBO’s Watchmen is a slowly unfolding murder mystery, and at the show’s center is the question of who the 105-year-old man in the wheelchair is, who claims he strung up Chief Judd Crawford himself. Named Will Reeves and played by Louis Gossett Jr. (from An Officer and a Gentleman and Roots), Detective Angela Abar isn’t entirely sure what his deal is, and after that shocking ending, she can’t exactly question him any further. The old man in Watchmen is revealed to not only be Angela’s grandfather, but someone who has “friends in high places,” as what looks like a UFO literally whisks both him and Angela’s car away in second episode finale. What in the world?

There are a few things we can piece together about Will Reeves, and we’re guessing right now he’s going to be a very important puzzle piece to the whole season. We know for sure Will was a child during the Tulsa Race Massacre that opened the series. He’s the son of an army man who honorably served the United States during WWI, only to come home to a country that still persecuted Black Americans. Will’s father pocketed a propaganda pamphlet that the Germans dumped over the Black troops — a real life tactic used to sow discord — that called out the hypocrisy of American society. Will finds this pamphlet in his father’s military coat and recites the words over and over again, until the paper is threadbare in his hands at the age of 105.

“Do you enjoy the same rights as the white man in America?” the pamphlet reads. “All this is entirely different in Germany … To carry the gun in service of America is not an honor, but a shame … Come over to the German line, and you will find friends who will help you along.” On the back of the pamphlet is a note from Will’s father, simply reading “Watch Over This Boy.”

Whether or not vigilantism helps or harms the general public is a huge question of the original Watchmen comic, and in the show this has evolved into questioning whether or not America’s institutions — its law enforcement and political systems — are really doing their job. From Will’s perspective, they’re clearly not, and they’ve never fully addressed inequality and injustice. Will survived a horrendous act of violence in Tulsa, and now lives in a time when a white supremacist group, the Seventh Kavalry, is on the rise, and when the chief of police was apparently also a Ku Klux Klan member. It seems significant that Will’s story opens with a black and white film about Bass Reeves, the Black Marshall of Oklahoma, who is praised by the townspeople for unmasking their corrupt white sheriff. Does Will see being Bass Reeves as his destiny? Considering the last name, are they actually related? Possibly!

There’s already a theory going around that Will Reeves is Hooded Justice, the first masked hero on the scene in the original comics. They do share a similar color scheme — burgundy and dark purple — and the noose that Hooded Justice wore as part of his costume could be a reference to how Will purportedly hung the Ku Klux Klan-associated Judd. In the comic, after the government makes vigilantism illegal, Hooded Justice simply disappears, never revealing his identity. Notably, there are rumors that Hooded Justice was a German man, a detail that would dovetail nicely into Will obsessing over working with the Germans — or, as Will’s father’s last message mysteriously suggests, may have already been working with somebody German all along.

Furthermore, a Hooded Justice film playing within the episode seems to be an obvious reference to Will actually being Hooded Justice. In the comic, there is a young boy who’s reading a pirate comic the whole time, and the events of that comic often subtly reference what’s happening in Watchmen. It’s a meta nod at the medium itself, and Watchmen the show playing a Hooded Justice show may be a very obvious sign about who Will is.

The major problem with this theory is, of course, that it would be in extremely poor taste to have the hero who wears a literal noose be a Black character. Another complication is the fact that Gossett Jr. himself went on Atlanta & Company and said his character’s name was “Bass Reeves, the most successful Marshall in the west.” Bass Reeves is the actual historical figure who inspired the Lone Ranger character, but how then is it possible that a young Will is watching a film of himself at the start of Watchmen?

The answer for this, and for the alien ship at the end, may be one of two major figures from the comics: Doctor Manhattan or Ozymandias. Doctor Manhattan, a radioactive, scientifically-created meta-human, is on Mars during the Watchmen show, but his ability to manipulate space and time could explain how Will is perhaps able to jump through time.

A better explanation though is that Will is actually friends with Ozymandias. It’s very likely that Jeremy Irons’ character in Watchmen is actually Adrian Veidt, aka Ozymandias, aka the villain from the comics and the reason it randomly rains squid. A highly intelligent millionaire, Adrian is known for engineering hybrid creatures, but also super advanced technology. It’s very possible the ship that steals away Will is Ozymandias’, since who else would have the time and money to make such a thing? Most notably, Ozymandias’ parents were German, which would bring the pamphlet about “German friends” full circle.

But why would Ozymandias help Will? Is it because Will is Hooded Justice, his old comrade from their masked hero days? If that’s the case, Will could be the key piece that ties the two halves of the show together. It’s impossible to tell what will happen right now, but considering Watchmen is created by Damon Lindelof, the showrunner behind the convoluted Lost, viewers can expect to be in for quite a wild ride.

More like this
'The Last Of Us' Has Officially Been Renewed For Season 2
By Darshita Goyal
Rupert Grint Just Shared A *Major* Update About Ron Weasley’s Future
By El Hunt
This 'Gossip Girl' Wardrobe Error Has Gone Viral On TikTok
By Alyssa Lapid
At 28, Rosie Perez Risked Her Career To Stop Playing Stereotypes
By Gabrielle Bondi
Get Even More From Bustle — Sign Up For The Newsletter
From hair trends to relationship advice, our daily newsletter has everything you need to sound like a person who’s on TikTok, even if you aren’t.