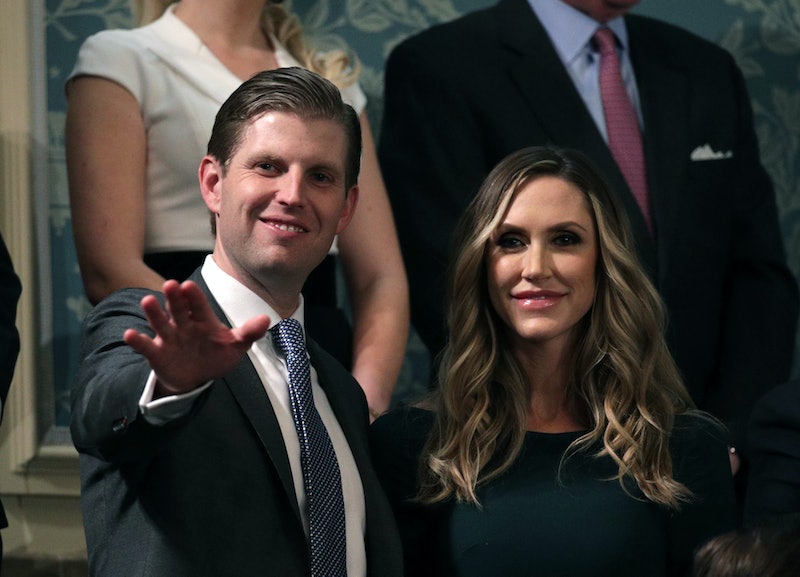 To commemorate Eric Trump's 35th birthday, Lara Trump's birthday message to Eric included lots of photos of their baby, Luke, who was born in September 2017. "HAPPY 35th BIRTHDAY @erictrump!!!!" Lara wrote on Instagram on Sunday morning. "We all love you so much! 🎈🎉🎁🎂"

Lara posted nine photos of her husband, including multiple selfies of the couple, shots of Eric with Luke and the couple's two dogs, and photos of both Trumps at events and parties. One of the photos was of Eric and Lara from the New Year's Eve party at Mar-a-Lago resort in Florida less than a week ago. (President Trump did not attend the party because of the continued government shutdown, but First Lady Melania Trump did attend.)

Eric wasn't the only Trump child to have a recent birthday. Donald Trump Jr. celebrated his 41st birthday on New Year's Eve — and Don Jr. also got a celebratory post from his significant other. "Happy Birthday to my best friend and amazing boyfriend @donaldjtrumpjr it’s been wonderful spending the holidays and your birthday together," Don Jr.'s girlfriend Kimberly Guilfoyle wrote on Instagram on Dec. 31. "Here's to an incredible 2019! ♥️🥰💕🇺🇸🙏XO Kimberly."

Don Jr.'s recent birthday didn't stop his siblings from sending their birthday wishes to Eric on Sunday. Eric's sister and presidential adviser Ivanka Trump wished her younger brother a happy birthday as well. "Happy birthday @EricTrump. I hope that this year is your best turn yet around the ☀️! xx," Ivanka tweeted on Sunday.

Ivanka attached a throwback photo with the tweet. The photo featured herself, Eric, and Don Jr. together as young kids, sitting on a bright striped couch. In the photo, Don Jr. had Eric in a headlock while Eric and Ivanka smiled widely toward the camera.

The Republican Party also joined the chorus of family members and conservative voices wishing the third eldest Trump sibling a happy birthday. "It's almost Eric Trump’s birthday! Make sure to sign his card and include your personal message here," the GOP account tweeted on Saturday with a link to sign a birthday card for Eric.

The GOP birthday card tweet wasn't nearly as well received. As New York's The Cut reported Sunday morning, about 2,000 accounts responded to the political party's call for birthday wishes with many pointing out that the GOP wanted birthday wishes for someone who is a private citizen.

On Sunday, the GOP shared a photo of Eric from the 2016 Republican National Convention in Cleveland, Ohio. "Happy birthday, @EricTrump! With your help, we are truly Making America Great Again!" the political party's tweet read.

In January 2018, Eric celebrated his 34th birthday at a Mexican restaurant in upstate New York with about 2 dozen friends and family, according to The Journal News. Department of Housing and Urban Development administrator Lynne Patton posted a photo of the meal on Facebook: "#HappyBirthday to one of the greatest people I know. We love you, Eric! Amazing night with even more amazing friends," Patton wrote. "I think Lara summed it up best when she said, 'I love everyone at this table so much!'"

As of writing, Eric has not released birthday plans for this year. But based on how Trump administration officials have been received at Mexican restaurants, there might be a change of venue.