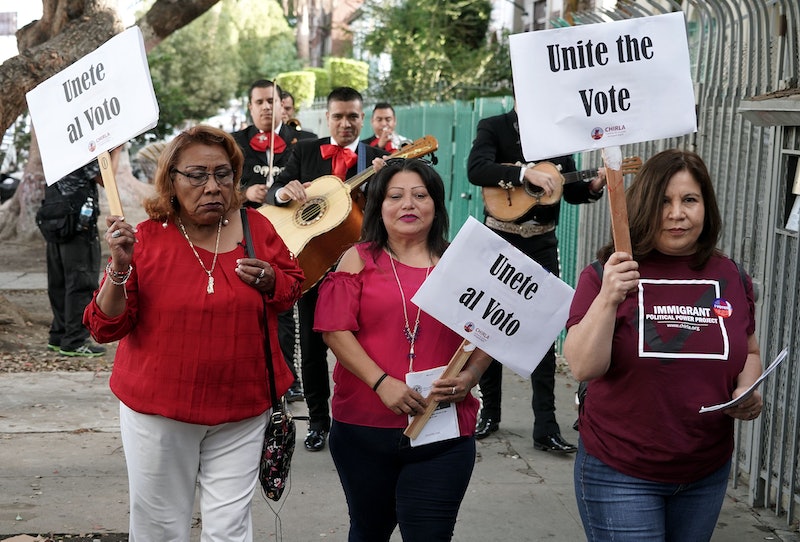 In this op-ed, Bustle Associate Lifestyle Editor Melanie Mignucci explains why the use of Spanish at the Democratic debate wasn't enough to earn the support of Latinx voters.

One of the most striking moments from the first Democratic primary debate was hearing three candidates — Beto O’Rourke, Cory Booker, and Julián Castro — speaking Spanish on stage. During the debate, Twitter users were quick to poke holes in O’Rourke and Booker’s use of Spanish. Viewers noted their halting sentences, awkward conjugations, and forced tone in contrast to Castro’s restrained, more fluent, and more authentic Spanish. He only used it to say his name, that he was running for president, and that he was excited to say "adiós" to Trump in 2021.

As a Latinx person who learned to speak Spanish fluently as an adult, I’m not going to criticize someone’s pronunciation of “presidente” or their use of "estar" where "ser" would be better. What really matters to me is that candidates who want to appeal to mi gente speak to their policies that will actually help the Latinx community. That's why the use of Spanish at the debates felt calculated and misguided. To me, it was little more than performative virtue-signaling that created more distance between myself and some of these candidates.

O’Rourke, a former House representative from Texas, started off the night by responding to his first question in Spanish — a choice that was described as a “power move” by CNN, despite the fact that he didn't actually answer the question, which was about whether he'd support a 70% marginal tax rate on the country's highest earners. Later in the night, Telemundo anchor José Díaz-Balart asked O'Rourke in Spanish what he'd do on his first day of the presidency. O'Rourke answered: “Vamos a tratar a cada persona con el respeto y dignidad que merecen como humanos” — "we will treat every person with the respect and dignity they deserve as humans."

New Jersey Sen. Booker, not to be shown up, answered a question on immigration in Spanish. He said that the situation is unacceptable, which, fair enough, but he didn’t outline what he plans to do to make the U.S. immigration policy more acceptable. He later said, in English, that he would end “ICE policies” and reinstate DACA.

These are all fine statements, to be sure, and the candidates then followed up with more detailed explanations of their goals in English. Their responses showed progressive values that are likely to impress people engaged enough to watch these early debates, including young, enthusiastic Latinx voters.

So the issue is not that a few candidates made bald-faced attempts to appeal specifically to Latinx voters. In fact, I’m glad to see this sea change in Democrats, who even a year ago wouldn't have bothered pandering to Latinx voters. But if O'Rourke and Booker really want to show this community that they care, they would let the closed-caption translations do their job.

Hearing these attempts at Spanish aren't especially useful for debate viewers. For Latinx and Hispanic voters who don’t speak English, hearing a candidate say one, largely useless line in Spanish isn’t going to help understand how that candidate's policies will actually affect them. They'll rely on Latinx media for that information.

For Latinx voters who don’t speak Spanish, Booker and O'Rourke busting out their language skills is meaningless virtue-signaling. It's an aesthetic choice above anything else, the way white women wear big, gold hoops to code themselves as being from the block. Their performative use of Spanish showed that they don’t understand the audience they're speaking to.

“I just don't feel like that's the best way to appeal to Latinx voters,” my co-worker, Elite Daily associate dating editor Veronica Lopez, who is Venezuelan-American, tells me in a Slack message. “It felt self serving: ‘Look at me and how I kinda speak Spanish!’”

What impressed me as a Latinx viewer were the moments where candidates spoke, clearly and in English, about what makes the Trump administration's immigration policy so unacceptable. Castro, who was the secretary of Housing and Urban Development under former President Barack Obama, called out the use of Section 1325 of the Immigration and Nationality Act to separate families at the border, and he outlined the concrete steps he'd take to repeal it. This stood out in contrast to other candidates who made promises about reigning in Immigration and Customs Enforcement (ICE) and Customs and Border Protection (CBP) officers.

Unfortunately, not one candidate brought up the fact that American citizens in Puerto Rico remain without adequate disaster relief nearly two years after Hurricane María. But I was happy that Castro reminded the debate audience he made San Juan his first campaign stop (by the way, Puerto Ricans on the island get to vote in the primaries, but not the presidential election). Actions like these signaled that Castro's platform will actually work to lift up the Latinx community — something that his use of Spanish didn't, and didn't need to, convey.

The Latinx community isn’t a monolith. We don’t all speak Spanish, we're not all immigrants, and we didn't all watch the debates. But what we all need is a candidate who knows how to speak to us — not in halting, practiced Spanish, but in terms of policies that will actually change lives.