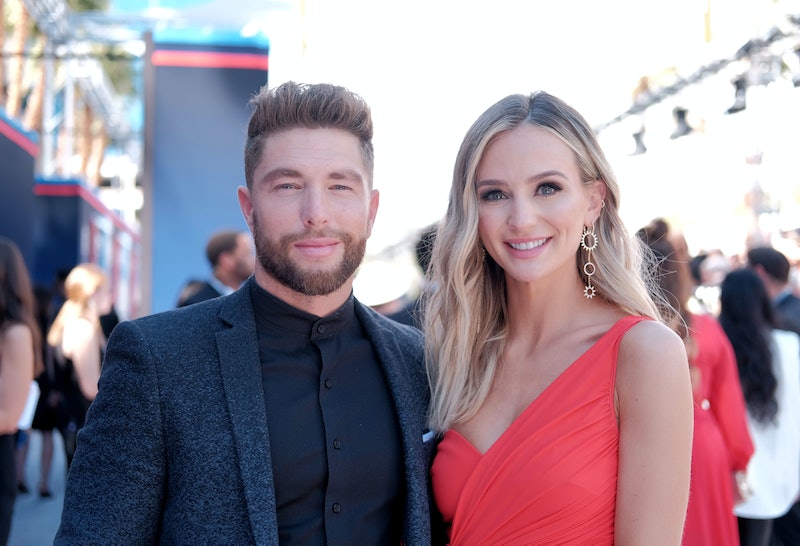 One Bachelor nation couple who's stronger (and more musical) than ever? Lauren Bushnell and Chris Lane, who are set to appear on the ongoing season of new Bachelor spinoff Listen to Your Heart. Because the show wrapped filming in February, their episode was filmed some time ago. Now, the couple is sheltering at home in Nashville and doing their best to keep the romance alive during this unusual time. The coronavirus pandemic has upended some of their plans: Lane and Bushnell postponed their honeymoon, which was originally scheduled for April, according to Entertainment Tonight. Lane, a touring country musician, had taken time off from work for the getaway, and the couple has been adjusting to the change of pace.

"As much as we're enjoying time together, I know he's missing doing what he loves so much," Bushnell told ET. "I feel kind of bad for ever complaining about how crazy his schedule is, 'cause I definitely see how much he misses doing what he loves."

But the country singer and former Bachelor star appear to be keeping busy. In March, Lane told E! News that he and Bushnell are "closer than ever." "We have tried to be outdoors as much as possible like going on walks, hanging out in our backyard and we've been having a blast playing games. Pool, ping pong, cards," he said, adding that they were focusing on "just being there for each other, checking in on each other and taking care of one another."

Bushnell and Lane had a whirlwind romance: the couple moved in together in March 2019, got engaged in June, and wed four months later, per People. But they'd known each other for years, having met at a radio event in 2015. Three years later, Lane asked Bushnell to go on a vacation to the Bahamas, and they began to date soon after. That same year, the couple made their first public appearance on the red carpet at the Country Music Awards.

With Lane's tour indefinitely postponed, he and Bushnell are still making time for personal and professional endeavors. Bushnell is doing renovations on their home, while Lane is writing and recording a follow-up to his second album Laps Around the Sun, according to E! News. I'm very happy I have a front row seat to Chris right now," Bushell told the outlet.

Lane might not be able to perform in front of a live audience right now, but he'll still get to watch his Bachelor: Listen to Your Heart appearance from the comfort of his own home — and with Bushnell by his side, of course.