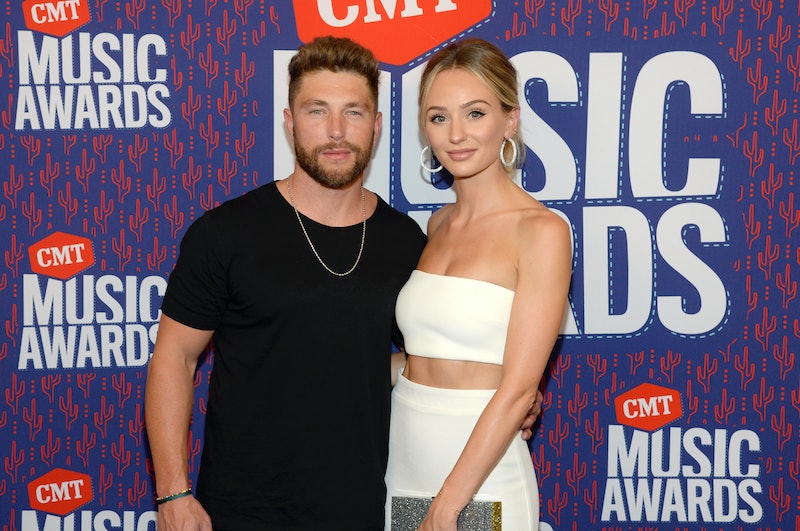 Another Bachelor Nation star has become a wife. Bachelor alum Lauren Bushnell and Chris Lane got married in their hometown of Nashville, Tennessee on Friday, Oct. 25, People confirmed the same day. Prior to the couple's indoor "secret garden" ceremony, Bushnell told the magazine she felt like "the luckiest girl" to be marrying the country singer, who proposed on June 16. In the company of 160 guests, Bushnell wed Lane wearing a sleeveless white silk gown by Nashville designer Olia Zavozina that had buttons from her mother's wedding gown added to it, according People.

The bride and groom wrote their own vows, and their wedding party included Lane's twin brother Cory (as best man) and Bushnell's younger sister Mollie (as the maid of honor), per the publication. Among the celebrity attendees: Jana Kramer and husband Mike Caussin, as well as Bushnell's Bachelor Season 20 cast mates Amanda Stanton, Jen Saviano, and twins Haley Ferguson and Emily Ferguson.

The hometown setting inspired the theme that Bushnell described as having "a secret garden kind of feel — really romantic." Wanting to "incorporate a lot of green," she added to People, stemmed from both Nashville and her home state of Oregon being "really green."

Oregon also happened to be the backdrop for Bushnell and Lane's engagement which happened just four months ago. The "I Don't Know About You" singer proposed to his now-bride in the backyard of her family's Portland home. Lane told People he decided to "keep it pretty casual" because he thought Bushnell would appreciate the "simplicity" of the "laid-back setting." To make the moment special, Lane played a song he'd written for her called "Big, Big Plans" on a boombox during the proposal. The lyrics included: "We're back in her hometown, and I'm down on one knee / I guess she finally figured out I'm gonna ask her to marry me."

"Even though I felt pretty confident I was going to get the 'Yes,' I've never been that nervous," he told People at the time. "When I got to the third verse of the song and knew it was time, I pretty much blacked out. The next thing I knew, she said 'yes' and the nerves just lifted! It's an explosion of excitement, pure joy, and love." Bushnell echoed Lane's sentiment, claiming that the proposal "was the happiest moment of my life!"

Bushnell and Lane first met at a 2015 radio event in Austin, Texas, but they didn't recognize their "mutual attraction" until the musician "randomly asked" her on a group vacation to the Bahamas in Aug. 2018. After going public as a couple during CMA Awards week in Nov. 2018, the pair moved in together the following March, with Bushnell relocating to Nashville from the West Coast to Nashville. Lane explained to Entertainment Tonight in Feb. that "sometimes when you're older you know what you want and it's easier to move a lot faster."

Bushnell previously got engaged to Ben Higgins on ABC's The Bachelor in 2016 before splitting a year later in May 2017. After news broke of Bushnell dating Lane, Higgins told ET in Nov. 2018 that he really wants "Lauren to be fulfilled and happy, whether it's with Chris or not."

In the end, Lane seems to, indeed, be the one to make Bushnell happy. For their first dance as a married couple, they danced to an acoustic version of Lane's "Big, Big Plans" proposal song. It appeared to be a fitting full-circle moment for the pair as they begin the new chapter of their lives together.