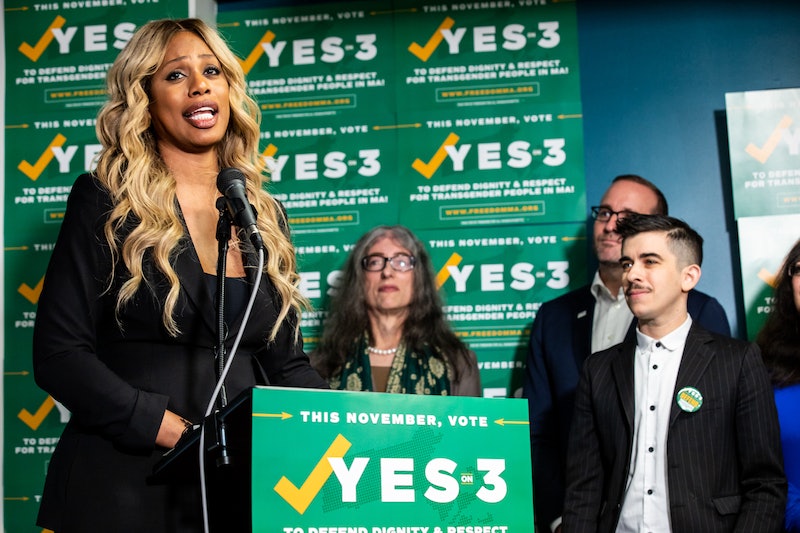 Orange Is The New Black actor and advocate Laverne Cox was in Boston, Massachusetts, on Oct. 25 on behalf of the #YesOn3 campaign, People reports, urging voters to uphold the 2016 Massachusetts law that protects transgender people from discrimination in public places. In an interview with the magazine, the actor shared a personal story about planning to die by suicide as a teen, as a result of the discrimination she experienced as a transgender person of color.

“The world made me feel like I would never be accepted, never live without being harassed and less than human,” Cox said in her remarks, according to People. “One day I sat down, and I typed up notes, and the notes said, ‘My name is Laverne Cox, and I should not be referred to by any other name. My preferred pronouns are ‘she’ and ‘her,’ and I shouldn’t be referred to as any other pronouns.’ And I made about five copies and had a copy in each of my pockets and placed them around my apartment because I was planning to commit suicide.”

Cox goes on to say she was determined not to be dead-named in death. Like misgendering, dead-naming is used as an act of violence against transgender or nonbinary people as an attempt to discredit or erase their identity, says the Advocate. And in addition to transgender folks speaking out about how these kinds of behaviors are immensely harmful, countless studies have shown how this kind of act takes a toll on the transgender community.

According to the journal Pediatrics, transgender and gender non-conforming kids can develop various mental health issues throughout their lifetimes because of prejudice and discrimination. In fact, the researchers found that transgender and gender non-conforming kids experience a much higher rate of suicide and depression than their cisgender counterparts, says Pediatrics. And research like this is supported by what transgender people are actually saying. The National Center for Transgender Equality (NCTE) conducted the largest survey of transgender people to date, and they found that 40 percent of the respondents have attempted suicide sometime in their lifetimes compared to the national suicide rate of 4.6 percent.

Simply using a transgender person’s correct name and pronouns is not only the right thing to do, it can also make a difference in someone's life. Research shows it actually reduces rates of depression and suicide. The University of Texas at Austin recently conducted one of the largest studies of transgender youths to date, and the researchers found that when transgender youths are allowed to use their chosen names, their rates of depression and suicide dropped.

This shouldn't be surprising information, but in a world that constantly threatens trans folks' existence, making sure everyone's identity is respected and affirmed can make a major difference. Question 3, the Massachusetts ballot question that threatens to repeal a previously-established law protecting transgender people from discrimination, is a crucial step towards this nationwide respect of trans folks' identities. This ballot question is of particular importance following the leak of a Trump administration memo, suggesting the Department of Health & Human Services may drastically limit the legal definition of gender, paving the way for the rollback of more protections for trans folks.

According to People, Cox told the crowd that she isn’t sure she why didn’t attempt to die by suicide that day, but she’s grateful she didn’t. Today, self-love and self-acceptance are a daily process for Cox that help her keep in touch with her self-worth, as she recently told Self.

More like this
The 19 Best Tweets & Memes About Bisexual Awareness Week
By Lexi Inks
Pro Footballer Zander Murray Is "Blown Away" By Support After Coming Out
By Sam Ramsden
These 2 Women Could Be America’s First Lesbian Governors
By Tess Garcia
Bimini, Tia Kofi & More React To Cherry Valentine’s Death
By Catharina Cheung
Get Even More From Bustle — Sign Up For The Newsletter