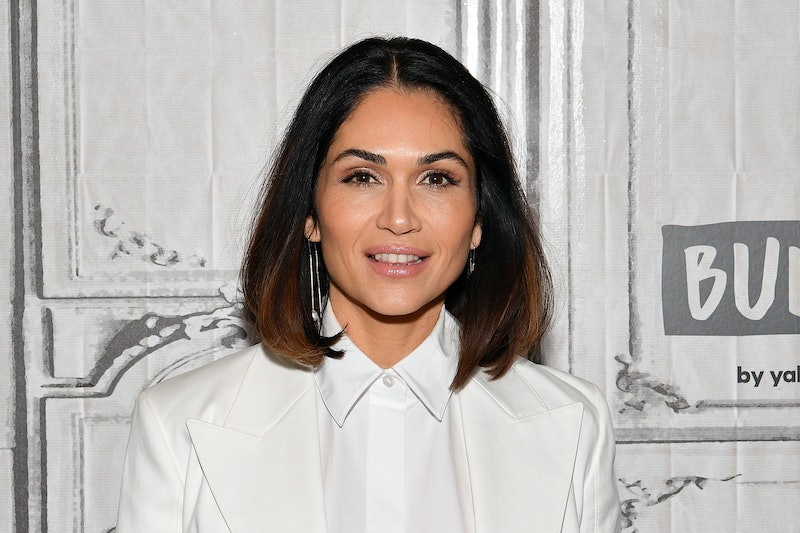 In Bustle’s Q&A series 28, successful women describe exactly what their lives looked like when they were 28 — what they wore, where they worked, and what, if anything, they would do differently. Actor Lela Loren, who recently joined season 2 of Netflix's sci-fi drama series Altered Carbon and will appear in the upcoming third season of American Gods, opens up about her sink-or-swim moment at 28.

"You know when the piano falls out of the sky in those Acme cartoons? I'm looking around like, 'When's the piano going to fall and crush me?'" Lela Loren is recalling the nerves she felt during a pre-read for the role of no-nonsense federal agent Angela "Angie" Valdes on Starz's gritty crime drama TV series, Power in 2013.

What came next for the then-33-year-old was a complete surprise. "Courtney Kemp, who is the show's creator, kicked everybody out of the room and was basically like, 'I think you're phenomenal,'" Loren tells Bustle. "It was the first time that I got a 'yes' so effortlessly. I didn't know what to do with the 'yes.'"

That yes led to Loren starring in six seasons of the most-watched TV show on Starz — a stark contrast to her life just a few years back. At 28, Loren was waiting tables to pay her bills and only landing guest-star roles, like that time she was cast as a Colombian drug mule or played a character who had an accent just for "flavor."

In February, Loren sat down with Bustle to reflect on the boldest move she made in her career at 28 and her biggest goal now at 39 years old.

Take us back to when you were 28. Can you describe how you were feeling and where you were?

LL: I had just gone to Portugal, where I had an accident and tore my MCL. It took 11 months to heal, but that was a sink-or-swim moment. I had to make a living just off acting because I couldn't wait tables between gigs anymore. I got really lucky because two commercials I had done in the past — both of their contracts got renewed out of nowhere, so I had some money coming in. But for a while, I couldn't even audition. I would try to walk without a limp, but I wasn't getting hired. Eventually, I landed a role for this play called My Antonia, and that's when I got my Equity Card, [proof that you're a member of the Actors' Equity Association], so that was really exciting.

Where were you living at the time? Describe what your house or apartment looked like.

LL: I lived in a rent-controlled studio apartment in Venice Beach on the cusp of Marina Del Rey. It was a 4-plex, and none of us knew each other, but we had a gregarious neighbor, who got us all to realize we liked each other, and he was also a set decorator. When I moved in, the courtyard looked like a wasteland. He let us know that if we all pitched in $250, he could transform the entire courtyard, and it became this beautiful, magical space. We had barbecues out there every weekend for close to a decade.

No one else was an actor on my block. Los Angeles can be a company town, and that sort of desperation is always in the air. To be able to put that aside for a minute and just be a young woman having fun with neighbors and going out and swimming in the ocean was a great source of grounding and balance.

During that time, what I realized about fear is your body can only be afraid for so long.

LL: It was really the panic of living an artistic life. Whenever you're living a creative life, you're watching your friends, who've taken other career paths, make progress — and the creative path doesn't look like that. I had to reframe what success meant, and I kept my overhead really low due to the very real fear of finances. During that time, what I realized about fear is your body can only be afraid for so long.

What's the gutsiest thing you did at 28?

LL: I survived a cattle call [a mass audition that's open to anyone], for a play at the Mark Taper Forum in Los Angeles, and it came down between me and another girl. They chose her for the part, but the director wrote my team a really lovely email. I don't know what possessed me, but I so badly wanted a shot for a role in another play at the American Conservatory Theater, so I called the Mark Taper Forum and asked to speak with the casting director. I said, "Hi, I don't know if you remember me. I auditioned for you three months ago and I made it all the way to the end. Could you please call the artistic director at the American Conservatory Theater, and tell her that I'm worth seeing?" She was like, "F*ck! Do you promise you're right for it?" Long story short, they saw me and I got the part.

Is there one piece of advice you'd go back and tell yourself? Or something you'd tell her to do differently?

LL: To trust that the graceless version of yourself will eventually find its footing. All the things you saw as obstacles or deficits, you'll look back and realize they were blessings because maybe you weren't ready to handle certain things.

There's a beautiful quote from Cheryl Strayed's Tiny Beautiful Things — which I feel like any woman in her twenties should read — and the quote is: “The useless days will add up to something. The sh*tty waitressing jobs. The hours writing in your journal. The long meandering walks. The hours reading poetry and story collections and novels and dead people’s diaries and wondering about sex and God and whether you should shave under your arms or not. These things are your becoming.”

In other words, just work hard. If you're a writer, write. If you're an actor, work on your craft, and life will unfold as it does.

What's your biggest goal now and how has it changed since you were 28?

LL: My biggest goal now — and I think I'm getting closer to it — is the concept of liberation to fully step into my skin and love who I am and where I'm at. To let go of these concrete ideas of what I think I want and trust that as long as I can stay connected to my values of community, of friendship, of integrity and authenticity, that my life is going to unfold and have meaning and work out just fine. Because my life doesn't look like any goal I've ever had, but it's so awesome.