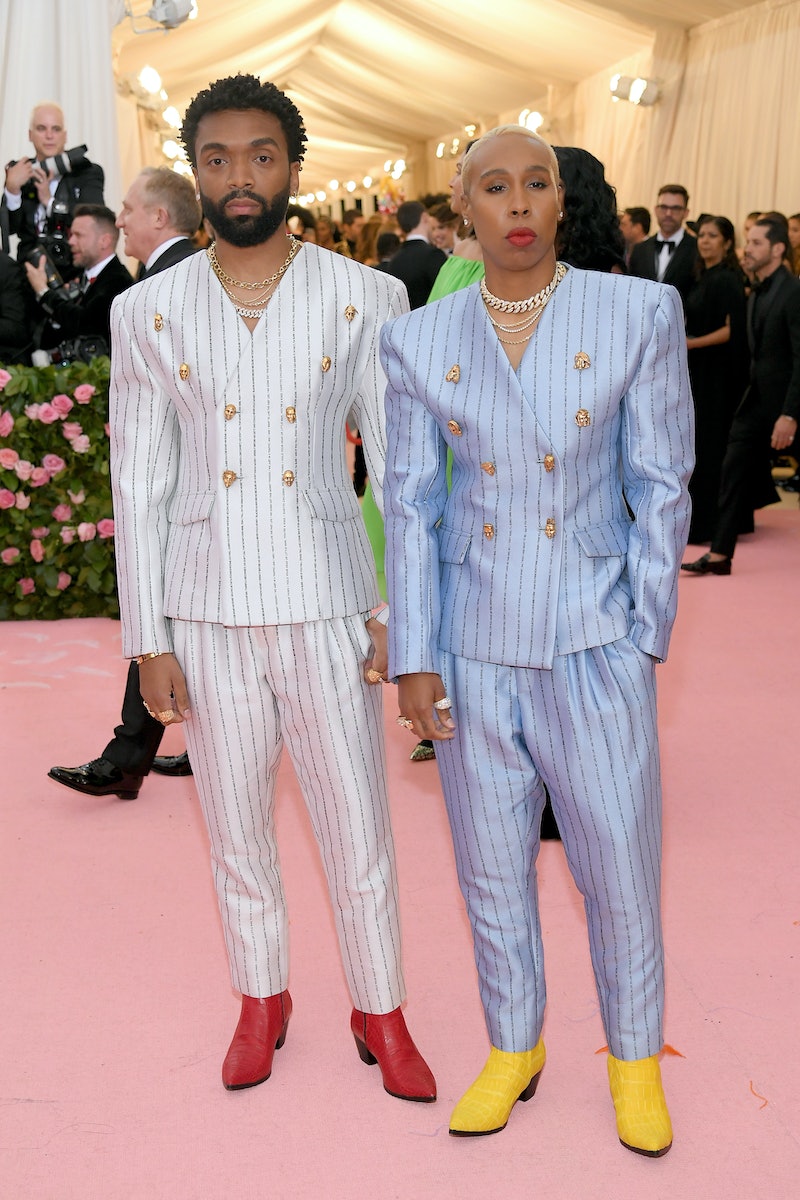 Some say “not all heroes wear capes," and in the case of attending the Met Gala, not all women wear dresses. Where some stars rock a long train to ascend the Met steps, Lena Waithe's 2019 Met Gala outfit, didn't require any of that — because she was looking to make a statement beyond just the clothes. But if there’s anything Waithe has shown fans in her fashion looks, it’s that you can still be a fabulously dressed without having to completely follow traditional red carpet rules.

While having a Met Gala theme like camp (not in relation to outdoor activities) be the guide to selecting an outfit could have been a challenge for anyone pulling off a suit, Lena Waithe is just that good. The screenwriter and actor dressed to impress in a shiny blue pinstripe suit with '80s shoulder pads. The devil is in the details and Waithe's pinstripes will read entire lives — literally. According to Out Magazine the apparent stripes on Waithe's suit are actually lyrics from classic jams including "I'm Coming Out" from Diana Ross and Sylvester's "Mighty Real."

The suit even came with eye-grabbing buttons shaped in the faces of iconic Black drag queens. But the most moving part of Waithe's outfit was the message embroidered on the back of the blazer that read, "Black Drag Queens Invented Camp."

"I wanted to make sure my outfit really represented the Black drag queens," Waithe told E! on the red carpet.

Along with her campy coordinates, Waithe dressed up her look with some neon yellow cowboy boots, with layers of gold chains hanging from her neck. As far as her hair goes, Waithe is one celebrity who changes her tresses like the weather, regardless of its short length. And on Monday, the actor styled her hair in a platinum blonde buzz cut look, which is a drastic change from the locs she previously wore to the 2018 Met Ball.

Accompanying "The Chi" screenwriter tonight was designer Kerby Jean-Raymond of Pyer Moss, who donned a similar look in white. The designer also had a message of his own written on the back of his suit that read, "Fix your credit. Pool money. Buy back the block."

Despite not being as over-the-top as many of the 2019 looks, both Waithe and Jean-Raymond's literal statement pieces honored the camp theme with the powerful messages each of their outfits displayed.

Waithe has only attended the Met Gala two times now, but has spoken volumes with both of her looks. In 2018, the star pulled up to fashion's biggest night in a full blown Pride cape over her suit to represent the culture for her debut. The theme that year was "Fashion and the Catholic Imagination" but Waithe moved to the beat of her own drum. According to Refinery29, the screenwriter explained, "It's not about church or Catholicism — you were made in God's image," Waithe said, referring to the LGBTQ+ community and the group's relationship with the religion. "So, that's how we rockin' tonight."

From a pride flag-ridden cape, to helping queer folks feel seen to a Black drag button suit, Waithe continues to break stereotypes and strut the red carpet in a powerful way.