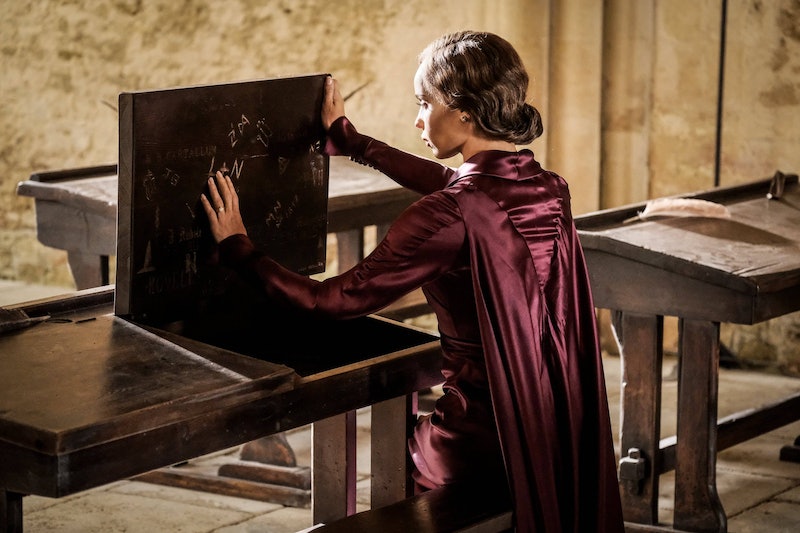 Leta Lestrange deserved better. And I wish I only meant that in terms of her apparent fate at the end of Fantastic Beasts: Crimes of Grindelwald. Major spoilers for Crimes of Grindelwald ahead. When she was introduced with a cameo by Zoe Kravitz in the first movie, I fell in love with the idea of her, hoping that Leta Lestrange’s Fantastic Beasts character arc wouldn’t end in her being a mere footnote in Newt Scamander (Eddie Redmayne) and Tina Goldstein’s (Katherine Waterston) love story. But it turns out that I should have had bigger worries. For Leta to die at the end of the second film is one thing — a thing that can still be undone in the three movies to come — but for her arc leading up to that death to be so offensive that I wish she’d never been a character at all? That’s something I can’t look past.

In the film, Leta finally appears as more than a photograph in Newt’s case when he heads to the British Ministry of Magic earlier in the movie. She works there alongside his brother Theseus (Callum Turner), to whom she is engaged. The first movie hints at Leta being a tragic and complicated character; here, it's revealed that she's defined by a past of neglect, pain, and guilt over something she did long ago. Her backstory is handed to the audience in one massive info dump near the end of the movie, shortly after which she sacrifices herself — though not before declaring “I love you” to one or both of the Scamanders. There’s certainly discourse that could be written about the handling of main female characters in Fantastic Beasts so far (at the moment, let’s be real, only Tina is coming off well). But the problem with Leta is a problem of intersectional feminism and, more specifically, the lack thereof. J.K. Rowling's screenplay fails to consider that Leta is a black woman, not just a woman, and thus the troubles she faces in her arc come across as particularly problematic.

Leta’s half-brother Yusuf Kama (William Nadylam) reveals that her father, Corvus Lestrange Sr. (Keith Chanter), coveted his Senegalese mother, Laurena (Isaura Barbé-Brown), and Imperiused her into leaving his family and sleeping with him in a union or unions that would eventually produce Leta. It’s not the first time the wizarding world has introduced such a thing: Voldemort was born of such a loveless coupling after his mother drugged his father with a love potion, Ron fell prey to a love potion meant for Harry that was sent by young admirer Romilda Vane, and Ron recommends that Harry’s son Albus brews one to help with his crush decades later in Cursed Child. The Imperius Curse is subbing in for the love potion, presumably to make Corvus Sr. seem more evil than your average teenager by throwing an Unforgivable Curse into the mix. But a white man magically taking control of a black woman and using that control, in part, to rape her is an uncomfortable slavery narrative, and one that the film uses to subsequently cast Leta in the role of the “tragic mulatto.”

As The Root’s Clay Cane explained in “Halle Berry and the Resurgence of the Tragic Mulatto,” the stereotype was a stock feature launched by 19th century American literature and treaded pretty similar emotional beats:

“Deeply troubled characters stumbled through life in a racially tortured turmoil. Were they black? Were they white? No one accepted them. They were eternal victims, all because Mommy and Daddy didn't stick to their own kind. Although these characters lived tragic lives, at the same time they were praised as an ‘exotic’ mix and somehow revered as being better than plain ole black.”

The Jim Crow Museum at Ferris State University also points out that in many stories, “the tragic mulatto found peace only in death” after a narrative lifetime trying to find acceptance and love from those who scorned her in the race-based society. Leta’s struggle in Crimes of Grindelwald isn’t race-based, but so many of the beats of her arc match the harmful stereotype of the “tragic mulatto” that I was disheartened by this ignorance of black history in Leta’s representation.

And what makes it all worse is that the film doesn’t pick up on what it’s playing right into. It’s implied by Leta’s words and the framing of the story that her life, her neglect, and perhaps even her mother’s enslavement are due to the Lestrange family’s lack of respect for women, not because of their race. “My father owned a very strange family tree. It only recorded the men. The women in my family were recorded as flowers. Beautiful. Separate,” she tells Newt. The fact that, visually, what we are watching is a white man kidnap and rape a black woman, then abusively neglect his black daughter in favor of his white son, followed by that powerful black daughter-turned-auror reducing herself to a sacrifice so her white suitors can escape doesn’t seem to have occurred to anyone involved with this film.

Or maybe it did, in a way. After all, in a November 2018 interview with The Los Angeles Times, Kravitz said that Leta’s race was an intentional choice. “This takes places in the 1920s, so what was it like to be a person of color in this world at this time? She might have been one of the only children of color in Hogwarts at that time,” she said. “She’s an outcast and whether it’s spoken about or not, I associate that, of course, partly with what she looks like. I think they were mostly only auditioning women of color for this role. I know it was an important thing for Jo. She was very aware of what she was doing.” That last point is debatable, as Rowling’s history of magic in America was accused of showing a simplistic, white feministic take on American history while also appropriating Native American culture at the same time. At the very least, Rowling just seems committed to representing people of color in her new wizarding world franchise without considering that good representation is more than just casting. If she had, she wouldn’t have written Leta the way that she did.

And that’s why I wish that she hadn’t written her at all. The teases of Leta’s complicated history with Newt in the first film were enough to make me love her. I wrote in 2017,

“All I want from the films is to see another heroic black woman, more competent than Seraphina Picquery before her, who parts on better terms with the man whose heart she clearly broke… Give her a chance to change the world, the way she's changed mine.”

While I’m glad that Leta didn’t turn out to be evil like everyone, including Grindelwald (Johnny Depp) to his detriment, believed she would be, I wish I hadn’t set my standards for the character so low. Because Leta deserved better from me, and she certainly deserved better from this movie.

I don’t believe that her story is done in these films, whether she managed to survive the fire or not. After all, while reading Newt’s mind, Queenie (Alison Sudol) describes Leta as a “taker” when a man like Newt needs a “giver” — and we see Leta do very little but give in the second film until she has nothing left to give but her own life. But after seeing her story in this film, I’m done. I’m done with the childhood part of me that will always yearn to see myself represented in the Harry Potter films, on purpose and not, as in the case of Black Hermione, as an if-you-squint afterthought. I’m done being asked to be content with characters like incompetent Madam President Seraphina Picquery (Carmen Ejogo) and abused Leta Lestrange, neither of whom were allowed to let their identities as black women in a white-dominated world intersect with their identities as women in a male-dominated world to create a fully-realized character. I’m done consuming new additions to the wizarding world that raised and influenced me personally and creatively, when those new additions do little but harm me in the end, especially as Rowling continues to be a controversial figure who refuses to acknowledge or learn from criticism. I’m just done.

For me, the tragedy of Leta Lestrange’s character isn’t that she was unable to find acceptance in her family because she was a woman and in her society because she was a Lestrange. The tragedy is that she taught me that I should have been happy that her creator never tried to represent me with a black woman as a main character. It only hurts both of us when Rowling tries.

More like this
Alan Rickman's Diary Reveals Why He Considered Leaving 'Harry Potter'
By Darshita Goyal
A New Scooby-Doo Movie Confirmed Velma Is Gay & Twitter Is Pumped
By Radhika Menon
Everything You Need To Know About ‘Black Panther: Wakanda Forever’
By Bustle Editors
The 50 Most Powerful Characters In The Marvel Universe, Ranked
By Johnny Brayson and Nola Pfau
Get Even More From Bustle — Sign Up For The Newsletter