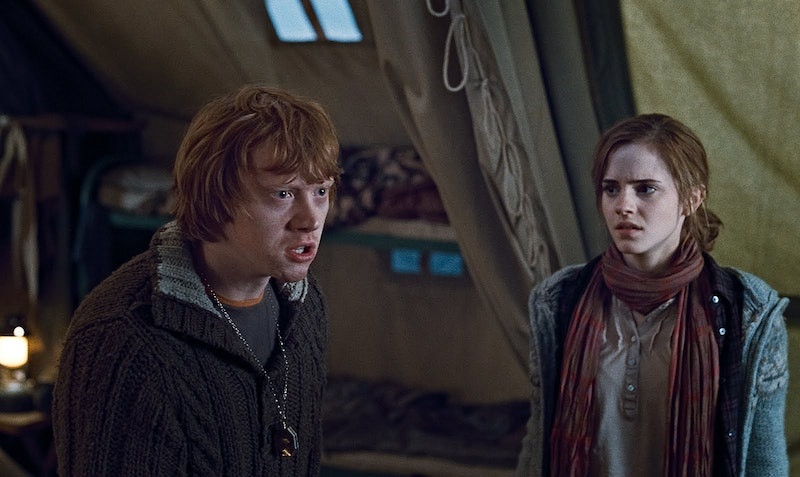 Ah, another day, another one of my rants about why Hermione marrying Ron is utterly unrealistic and, frankly, insulting to real life Hermiones everywhere. I have long since held the belief that Hermione and Ron did not belong together — and no, not because J.K. Rowling disavowed her own decision to bring them together, or because Rupert Grint himself said they would be divorced by now. I don't support it because time and time again, Ron is manipulative, emotionally abusive, unsupportive, and, well, just plain rude. His lack of self-awareness is addressed in the books, but not nearly soon enough or to any redeeming degree. Rowling regrets their partnership because it was a form of "wish fulfillment" on her end; I personally regret it because it told a generation of little Hermiones that it was OK to settle for a man who undervalued them, took advantage of them, and were in no way their moral, intellectual, or emotional equal.

And it is because of this that I read Harry Potter and the Cursed Child with a wary eye. It was impossible to ignore that, despite Rowling's public misgivings, Ron and Hermione looked very happy together in the cast photos. Even without knowing any spoilers about the play (oh, warning, by the way: MASSIVE SPOILERS for Cursed Child ahead), it was clear they were setting the tone for their relationship: Everything's fine here, guys! WE ARE ALL SMILES AND RAINBOWS AND BUTTERFLIES.

But even Cursed Child couldn't undo the damage that Ron Weasley's rep did — in fact, if anything, the "eighth Harry Potter book" was definitive proof that Ron has been, and always will be, The Worst.

He Was Plastered At His Wedding — And Evidently, Everywhere Else Since

"But Ron grew up!" the Ron supporters are crying in the distance right now. (And shockingly, there are a lot of them? Huh.) But just in case there was any lingering belief that Ron turned himself around for Hermione's sake, here's a fun little quote:

"Well, we were young when we did it the first time and I got very drunk and — well, to be honest, I can't remember much of it and ... the truth is — I love you, Hermione Granger, and whatever time says — I'd like the opportunity to say so in front of lots of other people. Again. Sober."

This is the part where we were all supposed to d'aww about how reformed and sweet Ron was, but really, this is a flag so red it's practically blinding. Even on their wedding day — the one single day he would have had to behave himself in an acceptable manner for more than a few hours — he was so drunk he blacked out? This line is so awful and yet so perfect, because yet again, Ron is asking for second chances from Hermione on things that shouldn't have even been incidents in the first place, and expecting the words "I love you" to work as a giant bandage.

And just in case you thought "oh, he was nervous, it was a one time deal!" — no less than a few lines later, he's confessing that he regularly gets sloshed like this.

"I was having a couple of firewhiskies with Neville in Hogsmeade — as you do — setting the world to rights — as we do — and we were coming back — quite late, quite very late, and trying to work out which Floo I could use because when you've had a drink sometimes you don't want to use the tight ones — or the turny ones or — "

... So essentially, while Hermione is kicking ass and taking names and forgiving Ron for bull like blacking out on their wedding day, Ron is getting sloshed. Yet again, recognizing that a behavior is wrong and repeating it over ... and over ... and OVER. Apparently some things never change.

Speaking of never learning your lesson, the fact that Ron goes on to give Albus Potter a love potion not only is hella problematic, but genuinely makes no sense. I've written at length about how the existence of love potions in Harry Potter perpetuates rape culture — it's essentially the wizarding version of a roofie, and we see in multiple cases in the narrative just how real and awful the consequences for the characters are — but beyond the fact that love potions are inexcusably awful, Ron himself was once a victim of love potions. In fact, after he ate (well, stole — this is Ron, after all) Romilda Vane's spiked chocolates, he nearly died in the effort to resolve it. The whole incident is one glaring, giant highway sign of "This Is Wrong And Nobody Should Be Doing It," and YET.

To make matters worse, it's evident that Ron thinks that Albus has used the love potion on Delphi, and also evident that he's proud of Albus for doing it:

"Saw them on the roof together, near the Owlery with Scorpius playing the gooseberry. Nice to see my love potion being used well, I thought."

Translation: Nice to see what I presumed was my nephew drugging a girl and engaging in romantic relations without her consent, I thought. The fact that Ron was once a victim of a love potion himself makes this all the more skeevy. He had his autonomy taken from him once, and even as a grown ass adult he's encouraging this awful thing?

He's Still Beating People Up Like It's Grade School

Ron trying to punch Draco's lights out for calling Hermione a "Mudblood" could have been overlooked as well-intentioned in their Hogwarts days, but when he's a full-grown man? Besides, it's not like he said anything particularly threatening — Draco was just being a jerk, which honestly should not be a shock to anyone by now, and here comes Ron sinking to his level:

HERMIONE: Draco. Harry brought this matter to the attention of the Ministry. And I — as the Minister for Magic —

DRACO: A vote you only won because you are his friend.

RON is held back by GINNY as he charges at DRACO.

RON: Do you want a smack in the mouth?

Again, he is PUSHING 40 and threatening physical violence on someone because they said something rude to his wife? A wife who is, by the way, more than capable of defending herself, and would certainly do so if she thought it was worth doing in this situation — which clearly, she did not. But again, it would be very un-Ron like to take any of that into consideration before he acts.

HERMIONE (with a grin): You know, Ron says he thinks I see more of my secretary, Ethel (she indicates off) than I do of him.

Oh, wow. Another man subtly guilt-tripping his wife for having a more prominent career than he does. How refreshing!

And no, this isn't just an offhand comment or joke that he made one time — because you just don't make an offhand joke like that without there being some underlying manipulation behind it. It seems that this subtle resentment is confirmed in the second alternate timeline, when Scorpius tells Ron and Hermione how things ended up in a world where Harry survived the Battle of Hogwarts.

RON (wanting to join in the fun): Brilliant. What do I do?

RON: Okay, so she's Minister for Magic and I run a — joke shop?

SCORPIUS: You're mostly focused on bringing up your kids.

RON: Great. I expect their mother is hot.

If anybody needs me I'll be busy screaming into a trash can until I get over just how easily emasculated Ron Weasley is no matter how many Wizard Wars he survives.

He Told Queen Hermione, Slayer Of All Things That Can Be Slain, To "Shut Up"?

HERMIONE: If this is your way of saying you want a martial break, Ron, then, to be clear, I will skewer you with this quill.

RON: Shut up. Will you shut up for once? I want to do one of those marriage renewal things I've read about. Marriage renewal. What do you think?

Correction: he told her to shut up twice. And no, it's not precious and ~romantic~ because he followed it up with a marriage renewal proposal. It's disrespectful and totally unnecessary, and the request to "shut up for once" has all sorts of insulting implications. Yet again, he cannot do anything selflessly or kindly, even for the person he supposedly loves most in the world.

His Description Of Delphi Is Icky AF

RON: He hasn't run away — he's having a quiet moment — he's got himself an older girlfriend —

RON: And a cracking one at that — gorgeous silver hair.

EW EW EW EW. Canonically, Delphi is 23, and Ron is 40. Also, dude. You're married to the Literal Perfect Human, and have children with her — including one Albus's own age, which should help contextualize just how CREEPY it is that he's describing a woman that he thinks Albus is dating as ~cracking~ and ~gorgeous~.

I wrote a half-joking very long manifesto about how the Weasleys are ridiculously anti-sugar throughout Cursed Child , but alas, it is the hill I choose to die on. At one point in the text Hermione is about to eat a toffee and says to Harry "Don't tell Ron"; later, when Ron kisses her, she says, "You're sweet," and he says, "And you taste of toffee ..."

And yeah, it's probably all a joke ... but yeesh, is it still tinged with some weird control issues. Let the Minister for Magic live. In fact, let her live far, far away from Ron, who proves in Cursed Child that he is not worthy of fans' defenses of him over the years. No amount of occasionally defending Harry and every now and then saying a nice thing can redeem Ron Weasley — he is, and forever will be, The Worst.