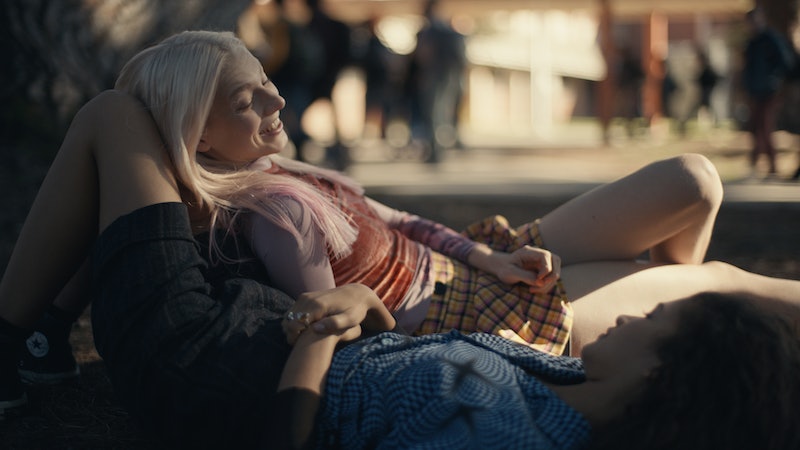 There are more LGBTQ people on broadcast and streaming TV than ever before, but it’s not quite time to stop calling for more and better quality representation yet. In its latest annual report on LGBTQ characters on television, the non-profit GLAAD found that 10.2% of series regular characters on broadcast TV are LGBTQ on shows anticipated for the 2019-2020 season. That milestone was reached less than a year after GLAAD called on broadcast networks to increase their LGBTQ series regular representation to at least 10%, reported The Hollywood Reporter. And now, the organization is calling for broadcast shows to increase their LGBTQ series regulars to 20% by 2025.

The report, Where Are We On TV, was the 15th GLAAD report of its kind, and it was the fourth year that the report included an analysis of shows on streaming services like Netflix, Hulu, and Amazon. It found that on broadcast shows, 22% of the LGBTQ characters featured were Black; 9% were Latinx; and 8% were Asian/Pacific Islander. These numbers were the same for Black and API characters compared to last year, but represented a small increase in the percentage of LGBTQ Latinx representation. Overall, the report found, this past year was the second in a row to feature more LGBTQ characters of color than white LGBTQ characters (52% POC characters, compared to 48% white characters).

While there were more queer women represented on TV than men for the first time, with lesbian representation increasing by 33% in the last year, there was markedly less bisexual representation than there was in years past. Representation of bisexuality dropped four percentage points, indicating a disconnect with the IRL fact that there are more bi people in LGBTQ communities than there are monosexual (lesbian or gay) people.

GLAAD also found that cis gay men far outnumbered any other queer group in terms of representation, as this population alone represented 38% of all queer characters on broadcast TV. This overrepresentation (relative to other members of LGBTQ communities) exists alongside the fact that there was only one non-binary character on broadcast TV (Taylor Mason on Showtime's Billions) and no canon asexual characters (though Netflix’s Bojack Horseman does have one ace character, Todd Chavez).

Only 28 shows across all broadcast and streaming platforms featured trans characters, with 8% of all LGBTQ characters being trans. Overall, there were only 21 trans women, 12 trans men, and five non-binary characters on shows across broadcast, streaming, and cable networks. The FX show Pose was cited in particular for creating a lot of that representation, creating space for trans actors and creators of color in an otherwise mostly white and cisgender television environment.

So where do you turn if you’re looking for the most LGBTQ representation you can find? The report found that producers Lena Waithe and Shonda Rhimes created shows that accounted for a large amount of overall queer representation, and CW shows like Black Lightning, Legends of Tomorrow, and Supergirl carried much of broadcast TV’s queer characters.

It's worth noting that GLAAD focused on analyzing quantity rather than quality of representation in this report, so it'll be up to you to determine which media you feel represents you best. But, the report reminds viewers, The L Word: Generation Q is coming to Showtime next year, which promises to bring more trans and queer characters to a screen near you. Hopefully then, the amount (and hopefully quality) of queer representation is only going to continue to rise.

More like this
Ozzie’s Coming Out Scene With Kitty On 'That ’90s Show' Has Twitter Sobbing
By Brad Witter
Gen Z Are Twice As Likely To Identify As Queer, According To New Data
By Sam Ramsden
Here’s What Happens To Bill & Frank In 'The Last Of Us' Video Game
By Brad Witter
Adam Ali Hopes 'Waterloo Road' Will “Subvert” Queer Misconceptions
By Sam Ramsden
Get Even More From Bustle — Sign Up For The Newsletter
From hair trends to relationship advice, our daily newsletter has everything you need to sound like a person who’s on TikTok, even if you aren’t.