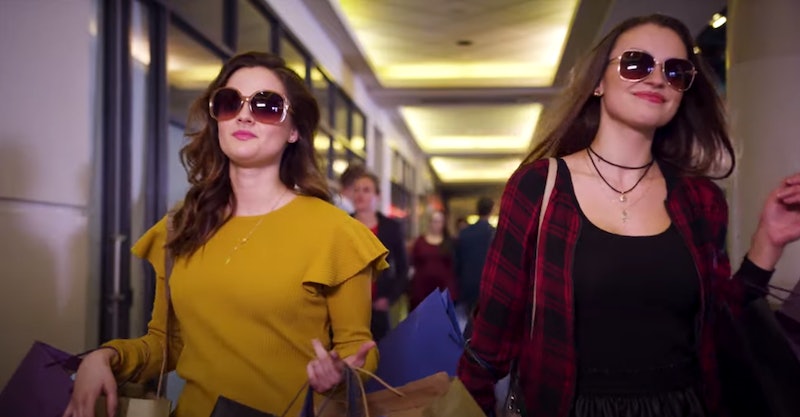 In Lifetime's new crime thriller Deadly Transaction, high school students Riley and Erica start running a counterfeit money ring out of their art classroom. When their teacher finds out what they're up to, things obviously spiral out of control, and the two girls find themselves navigating an increasingly precarious situation. The story is supposedly based on true events, though it's not really clear which events those are.

Like many other Lifetime movies, Deadly Transaction is a re-release. It debuted in Canada in 2018 as Counterfeiting in Suburbia, which you can now stream on Netflix. And if you do, you'll find that the first title screen reads, "This movie is inspired by true events" with no additional context.

That likely means it's not based on one specific story, but rather several reported incidents of high school counterfeiters in recent years. In May 2014, ABC News reported that five New Jersey teens had been arrested for allegedly printing and spending $1,000 in $5 and $20 counterfeit bills at their school's cafeteria and local businesses. In May 2011, two high school students in Virginia faced felony charges after allegedly using fake money to buy food. And in April 2019, 10 students in Auburn, California were allegedly involved in the passing and use of counterfeit $20 bills, per CBS News.

The Deadly Transaction story is of course a dramatized version of these reports. Before the police discover begin investigating Riley and Erica, they're caught, blackmailed, and seduced by their art teacher who wants $50,000 to pay off his massive debt. Eventually, he kidnaps Riley's boyfriend to ensure his demands are met, and by then the girls think they have no other choice but to follow through.

The Netflix version ends with another title screen, attributing the United States Secret Service for its thorough infiltration of counterfeiting across the country. "As a testament to the Secret Service's efforts," the text reads, "the U.S. Treasury estimated that less than .01 percent of approximately $600 billion in U.S. currency in circulation is currently counterfeit."