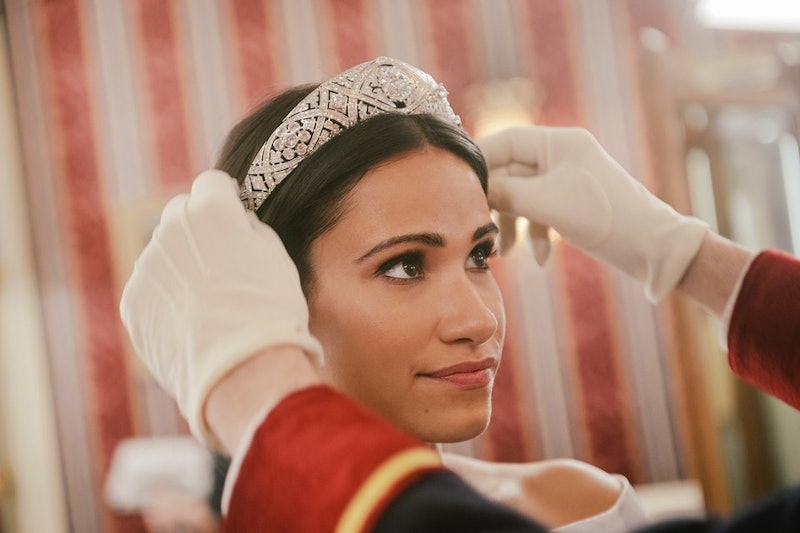 Leave it to Lifetime to provide fans with yet another romantic film to toast to... and on a holiday weekend, nonetheless. The Harry & Meghan: Becoming Royal release date is around the corner and hopefully viewers will be off from work to enjoy the royal programming in peace. The sequel will follow the 2018 TV movie Harry & Meghan: A Royal Romance, and pretty soon, fans won't have to imagine what this fairy tale marriage is like. They can watch it.

On Monday, March 25, Lifetime announced that Becoming Royal will be released on May 27, Memorial Day. The sequel will continue Prince Harry and Meghan Markle's love story into their marriage following the first film, which brought their initial courtship to the small screen. According to the Lifetime press release, the sequel is promising to "pull back the curtain to reveal the untold joys and challenges of life inside the Royal Family during their pivotal first year of marriage."

Further, the film will showcase how the couple's ideals have been at odds with longstanding tradition. "Beyond blending their families and cultures, Harry and Meghan's core values are put to the test as they try to find the balance between honoring Royal tradition and staying true to their beliefs," the network teases.

While the film continues the Duke and Duchess of Sussex's love story, the network has new lead actors for the sequel. Murray Fraser and Parisa Fitz-Henley, who played Prince Harry and Markle, have been replaced by Charlie Field (Genius) and Tiffany Smith (Supernatural). Production on the film started last month in Vancouver. From the press release, it seems many members of the royal family will be portrayed on screen, with characters including Prince William, Kate Middleton, Queen Elizabeth II, Prince Philip, Prince Charles, and Camilla Bowles.

The sequel comes just a year after Markle and Prince Harry's real wedding on May 19, 2018, which was watched by about 29 million Americans alone, per CNBC. It's uncertain whether or not the film will also cover the couple's pregnancy. Their first baby is expected to arrive this spring.

In a new interview with Vanity Fair, star Smith and screenwriter Scarlett Lacey teased what fans can expect in the Harry & Meghan sequel. Their nuptials will definitely be a driving force in the follow-up film. "The wedding certainly looms large," said Lacey. "This film deals with the drama of planning a wedding: the moment you'd much rather elope, the moment your family might mess it all up — and they nearly do!" But it'll also go far beyond saying I do. "The moment you first wake up as husband and wife, the realities of your new life hitting you hard, the first big fight, the first big make-up," she continued about what's ahead.

According to Smith, the film will also explore Meghan's relationship with Middleton. "We got to do some stuff with Kate, which I really liked," said the actor. "I think one of the biggest things, obviously, about Meghan is that she's such a supporter of other women and women's empowerment. That was something I think was important for all of us to focus on, myself included."

Last year's Harry & Meghan: A Royal Romance chronicled the beginning of the couple's love story and whirlwind romance. It reenacted when they met after being set up by friends, their first date, awkward moments, keeping their romance private, and dealing with the widespread media attention that followed. This Memorial Day weekend fans of the royals can check out the new film to see what's next for couple (on the small screen, that is).

More like this
Lilibet Had The Most Adorable Reaction To Prince Harry’s Dancing
By Sam Ramsden
Tyler Perry Makes Rare Comment About Meghan Markle & Prince Harry's Love Life
By Radhika Menon
Here's When 'The Crown' Season 5 Will Premiere — And What To Expect
By Bustle Editors
The 50 Most Powerful Characters In The Marvel Universe, Ranked
By Johnny Brayson and Nola Pfau
Get Even More From Bustle — Sign Up For The Newsletter