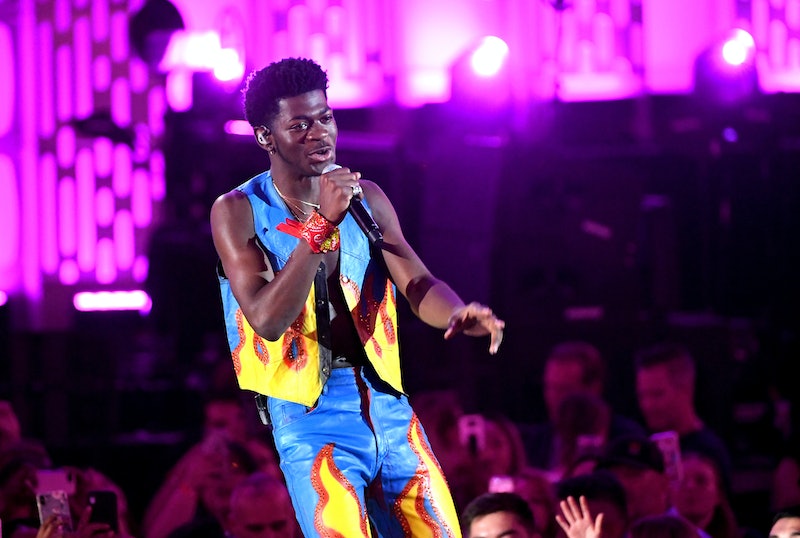 While Lil Nas X publicly came out in June, that doesn't mean the road to self-acceptance has been easy. On Monday, Sept. 30, Lil Nas X discussed his coming out journey with Gayle King on CBS This Morning, revealing it's taken him a long time to get where he is now. In fact, the 20-year-old rapper said that he used to pray growing up that this part of his identity would change.

As seen in the clip below, Lil Nas X explained to King that he knew his sexuality ever since he was younger, but during his teen years, he wished that side of him would "go away." "I would just pray and pray, and pray," he said. When King asked what exactly he prayed for, he clarified, "That it was a phase."

However, since then, Lil Nas X has embraced his LGBTQ identity and made a point to do so publicly. As he explained on HBO's The Shop earlier this month, he wanted to help fight the stigma he faced growing up, so that others wouldn't "hate" themselves. He also referenced that still-existing stigma with King. "Me being in this position, like, it’s easy for me," he said of coming out at a high-point in his career, "But some little boy 10 miles from here, it’s not gonna be good for him."

While Lil Nas X did acknowledge that "there’s still a lot to be done, of course," he and King ultimately agreed his coming out can hopefully help others who may be struggling with self-acceptance. In his interview with Ellen DeGeneres last Monday, Lil Nas X also discussed the power of him using his platform in this way. "It would be good for the youngins listening to me right now, who are going to have to go through stuff like this in the future, to know that it’s all right,” he said.

On the last day of Pride Month 2019, Lil Nas X came out on Twitter. Pointing to the lyrics of one of his songs as a clue, he wrote: "some of y’all already know, some of y’all don’t care, some of y’all not gone fwm no more. but before this month ends i want y’all to listen closely to c7osure." He also tweeted a follow-up with pictures of his 7 EP, which is decorated with rainbows, writing, "deadass thought i made it obvious." According to People, Lil Nas X came out to his father and sister before informing fans and followers.

Back in July, Lil Nas X opened up about facing backlash for coming out during an interview with BBC Breakfast. He noted that the music industry — especially the country and hip-hop genres — aren't always the most accepting of LGBTQ artists. Even so, he doesn't let hate on the internet get to him. "I'm not angry, because I understand how they want that reaction," he said. "So I'm just going to joke back with them."

Overall, it's been whirlwind few months for the rapper. "Old Town Road" became the longest-running No.1 song on the Billboard charts in July, as per Vox, and in August, Lil Nas X performed at the VMAs. But even amid major success, coming out still took courage. The music industry, and society at large, may have a ways to go, but Lil Nas X's story marks a step toward progress.