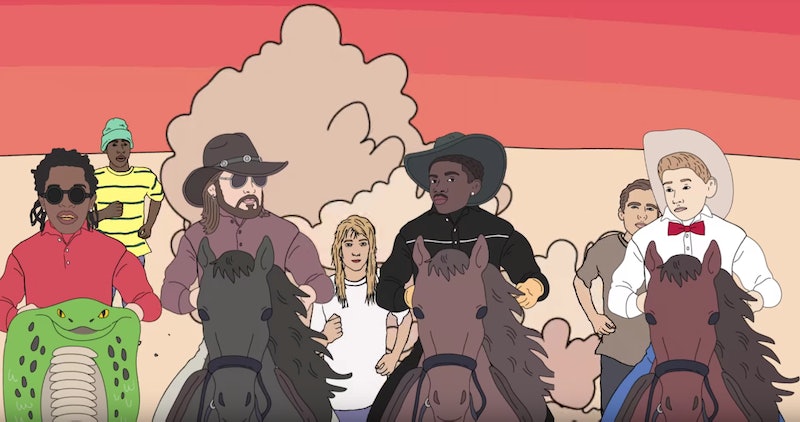 Simply releasing the song of the summer isn't enough to take over the Internet — Lil Nas X is also determined to prove that he's King of the Memes. The rising rapper recently released a brand new remix of his hit debut single, and Lil Nas X's newest "Old Town Road" video features Keanu Reeves, as well as every Internet joke that has gone viral recently.

The latest "Old Town Road" remix was released on July 12, featuring appearances by Billy Ray Cyrus, Young Thug, and Mason Ramsey, and the "Yodeling Walmart Kid" himself should have been a hint at all of the off-the-wall, Internet meme-ability that the rapper had planned for the music video. The animated clip — which dropped July 16 — centers around one of the Internet's current favorite jokes: the storming of Area 51.

In early July, a Facebook event titled, "Storm Area 51, They Can't Stop All of Us" went viral, proposing that people from all over the country meet up at the tourist center of the famed military testing base on September 20. The CIA officially confirmed the existence of Area 51 back in 2013, after years of rumors and conspiracy theories that the top-secret military base was hiding aliens and/or UFOS.

In the Facebook event — which has 1.5 million RSVPs at the time of publication — the host proposed that the Area 51 visitors "Naruto run" through the base in order to "see them aliens." Lil Nas X took that idea and ran with it in his video, which showed animated versions the four singers taking their horses to Area 51 to storm the base and hang out with some (very cool) aliens.

While the performers arrived at the base on horseback, Lil Nas X did pay homage to the original pitch from the Facebook group by showing an animated Keanu Reeves "Naruto running" into the base. The distinctive running style, which involves holding your arms straight out behind your back and tilting your head forward, comes from the titular character of the Japanese anime television season Naruto. A Reddit user then took a still from a video of Reeves, and shared it on the site along with the comment, "Area 51 here I come," leading to the actor becoming a major element of the Internet's obsession with storming Area 51.

The newest "Old Town Road" video also includes a shot of Thanos, the infamous MCU villain from Avengers: Infinity War and Endgame, with his head on the body of a bird, while an Infinity Gauntlet sits on the ground nearby. Lil Nas X is a big fan of Thanos memes in general, and one of the most popular ones on Reddit is "Thanos Bird," which involves photoshopping Thanos' arms onto birds, so the rapper is clearly having fun flipping the script.

Of course, it wouldn't be an ode to everything viral if it didn't include references to Lil Nas X himself. In fact, the new video is littered with references to the rapper's sophomore single, "Panini." The security guard at the beginning of the clip, who is playing Minecraft at work, is eating a panini at his desk, and later on, Lil Nas X pulls a panini out of his holster.

If you thought Lil Nas X would be done remixing his viral hit by now, think again. On July 13, the rapper asked Mariah Carey to work on yet another "Old Town Road" remix, and the singer responded by referencing her record-setting 1995 single, "One Sweet Day." And, just half an hour after dropping his newest "Old Town Road" video, the rapper teased yet another collaboration, this one with Bruno Mars, when he tweeted, "bruno we can tell them about your remix now bro."

It's unclear whether or not this collaboration will be another "Old Town Road" remix, though Mars did respond with a tweet of his own that read "JULIO!! FEED THE HORSES!" Whatever comes next for the rapper, it's clear the Internet will love it just as much as Lil Nas X appears to love the Internet.