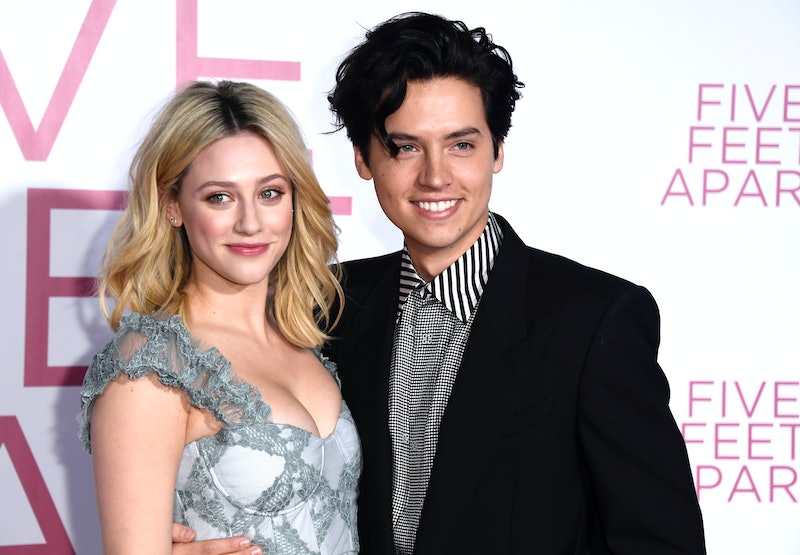 "Sources" say a lot of things. Sometimes those things turn out to be true, but other times they just end up adding more fuel to tabloid-created fires. So, are they or aren't they still together, you wonder? Honestly, who knows? In light of recent headlines, though, Lili Reinhart and Cole Sprouse's reaction to breakup rumors is all about poking fun at the situation. Their recent comments haven't exactly cleared anything up in regards to the status of their relationship, but the way they've been hitting back at celebrity gossip culture sure has been entertaining.

So, it's been kind of a rollercoaster lately for Bughead fans. Towards the end of July, several outlets reported that Reinhart and Sprouse — one of Riverdale's on and off-screen couples — had decided to part ways after nearly two years of dating. Neither of the stars commented on the rumors at the time, but a joint interview they did with W Magazine seemed to all-but confirmed the sad news.

Both Reinhart and Sprouse responded to W's story with seemingly irritated — yet also hilarious — Instagram posts, but again, they didn't confirm or deny things either way. (Bustle reached out to Reinhart and Sprouse's reps for context on their posts, but did not receive an immediate response. Bustle also previously reached out to both actors' reps about the split reports.)

Since then, they've continued to make light of the situation whenever the opportunity has presented itself. One of the most recent comments came from Reinhart, which was captured in a screenshot from @CommentsByCelebs.

On August 6, Variety shared a short video of Sprouse on their Instagram account as a part of their "Power of Young Hollywood" feature. "Cole Sprouse left Hollywood on his own terms," the caption read. "Then he booked #Riverdale, 'and it ended up tugging me back,'" it continued, referring to a quote from the actor in the article.

Despite the fact that the caption had nothing to do with their relationship status, Reinhart decided to chime-in on Variety's post with a little humor. "Sources say he's single now," she wrote. "Is he available?"

Sprouse, for his part, was a little more direct with his feelings about the whole thing. When recently asked by Entertainment Tonight how "annoyed" the rumors have made him, the actor replied, "Incredibly." The outlet noted that his response was made "jokingly," which became a bit more clear as Sprouse went on.

"No, I don't care," he told ET. "That's the nature of our industry. I think you have to poke fun of it a little bit," he continued. "It's kind of something you sign up for, but as long as can keep it light and fun, it's all good."

You know what? That's legit respectable. Sprouse has been in the entertainment business for almost his entire life, and he's clearly learned a lot along the way. Regardless of whether or not he and Reinhart are still together, they sure make a good team when it comes to combatting relationship rumors.