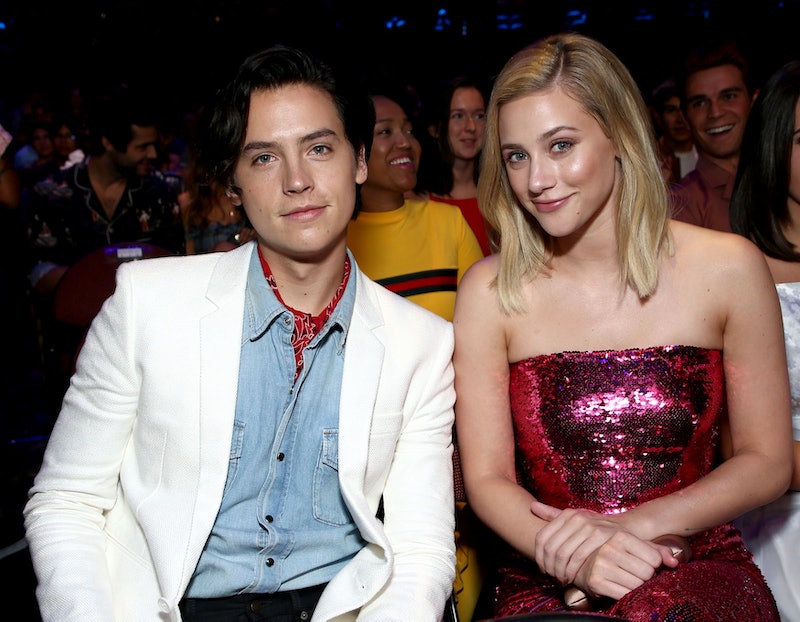 These two are just as romantic as Betty and Jughead. Lili Reinhart and Cole Sprouse shared Valentine's Day posts on Instagram on Thursday that capture exactly what the holiday is all about. Their posts are further proof that the Riverdale costars are head over heels for each other.

First, Reinhart posted the most adorable selfie of the couple staring into one another's eyes and smiling. The photo doesn't even need a caption, because the image itself speaks volumes. However, she did include a simple one that reads:

"You make me very happy. Happy Valentine’s Day, my love."

Cole also shared a picture of his love. Now, he didn't include a hashtag for the holiday or come outright and say "Happy Valentine's Day," but the Five Feet Apart actor posted the most gorgeous picture of Reinhart that he photographed himself. He also wrote next to it,

"Quite actually the only thing keeping me sane is @lilireinhart."

If that doesn't say Happy Valentine's Day, then what does? To have someone in your life, no matter if it's a significant other, a friend, or a family member, who makes you extremely happy and helps keep you sane, well, that's what life is all about.

Funnily enough, Cole's twin brother, Dylan Sprouse, felt a little jilted at the fact that his sibling didn't credit him as "the only thing keeping me sane." As the Comments by Celebs Instagram account pointed out, Dylan commented on Cole's picture of Reinhart, "Rude." Of course, the former Disney channel star is joking. Most likely, he adores the two as a couple, just like their biggest supporters do.

On Feb. 14, an interview Cole did with GQ was published, where he actually discussed his relationship in terms of social media. If you're unaware, Reinhart and Cole are very private people, especially when it comes to their romance. Even though they both share images of each other on Instagram, they try to maintain as much privacy as possible.

Like the former Suite Life of Zack and Cody actor explained to the magazine, "I think social media and the Internet reward extremes. I'm a firm believer that a lot of that experimentation should be done in private. Ultimate privacy." He also said about his relationship with Reinhart,

They don't have anything to prove as a couple, nor will social media solidify their coupling. They know what their relationship is and who they are as both a couple and individuals, without having to constantly post on social media as evidence that their romance exists.

Yes, they both posted pictures on Instagram on Valentine's Day, but they're allowed to showcase their feelings for each other whenever and however they want. If they want to do it on social media, great. If not, that's their choice.

Sprouse and Reinhart clearly aren't keeping their relationship off of social media, but they also don't feel the need to use Instagram as a way to provide personal details about their romance. Basically, when it comes to them as a couple, The CW stars will share photos and details on their own terms, including how grateful they are for each other on a day like Valentine's Day.