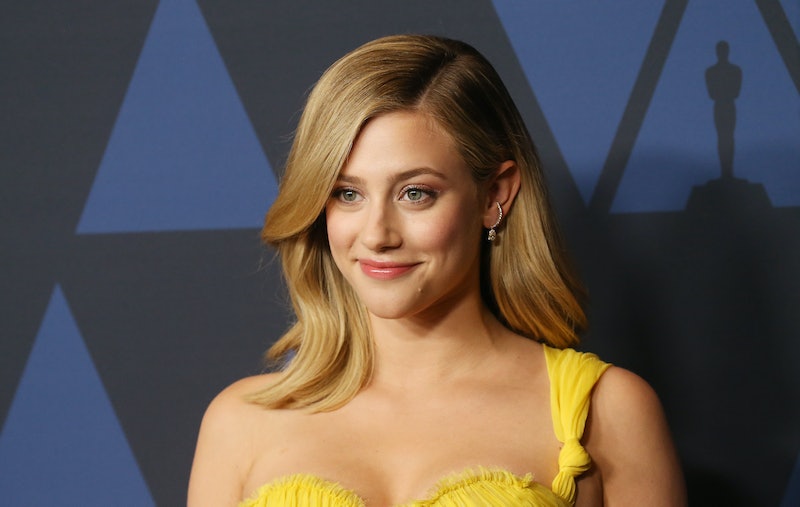 Betty Cooper is going from high school student to super spy — sort of. Actor Lili Reinhart just revealed she has a Charlie's Angels cameo that's taking her (temporarily) away from Riverdale. The actor spilled the news on Instagram on Wednesday, Nov. 6, revealing that she was made an angel for a day, alongside several other famous women. And it looks like Charlie's Angels stars Kristen Stewart, Naomi Scott, and Ella Balinska have some good company in the movie that also stars director Elizabeth Banks as one of three Bosleys.

Reinhart posted a photo with Banks and another group picture revealing a handful of other exciting cameos moviegoers can expect to see when the film drops on Nov. 15. The women in Reinhart's group photo include Olympic gymnast Aly Raisman, actor Hailee Steinfeld, Olympic snowboarder Chloe Kim, as well as Scott and Banks. Based on social media posts, it also looks like NASCAR driver Danica Patrick and professional wrestler Ronda Rousey will also make cameos in the film, though they won't all be angels. Based on a short clip shared by the film's official Instagram, it looks like Rousey will be training Scott's character in martial arts.

Meanwhile, the others definitely appear to be Angels. In photos, they are all wearing matching outfits, and, as Kim wrote in her post, he rest of the women all wore matching outfits and pink Nike sneakers. As Kim wrote on Instagram, they were all "Earning my wings."

It's unclear if Reinhart and the others are playing themselves or simply just angels. That said, in the previously mentioned teaser, Banks' character is seen yelling, "Go, Chloe! Go!," at Kim, suggesting thgat they're playing some version of themselves, or at least keeping their names.

In addition to teasing some fun cameos on social media, Banks has revealed many empowering moments planned for the film, which is why she created the reboot in the first place. "These are trying times,” she said on The Late Show With Stephen Colbert on Nov. 6. "I wanted to make a movie that celebrated women at work. When I watched the original show, I thought, 'Those are professional women. That’s a job that ladies get to do!'" For Banks, Charlie's Angels also exudes "sisterhood, camaraderie, working together, believing women, supporting women."