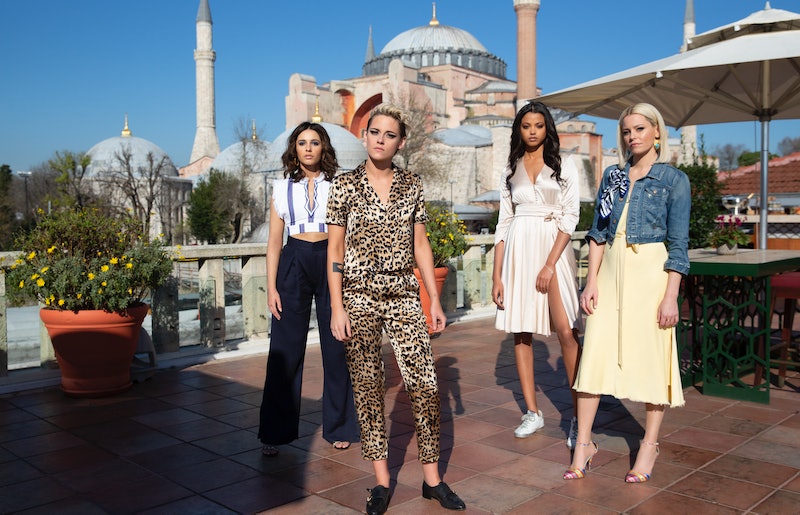 The new Charlie's Angels film isn't a reboot, but it is going to interpret the story in a brand new way: through the female gaze. Both the 1976-1981 and the 2000 movie adaptation were conceived by men. In contrast, the 2019 take on Charlie's Angels was written and directed by Elizabeth Banks, and during Bustle's visit to the film's Berlin set in November of 2018, it was clear that everyone involved was set on making it the most feminist addition to the franchise. In fact, according to Banks, this Charlie's Angels is all about believing women.

"One of the ingredients of this movie was supporting and believing women," Banks says in a phone interview months after the set visit (she was too busy directing to speak to reporters that day). "We have as much validity in what we're feeling and how we want to go about living in the world, being in the world, and that was really important to me," Banks adds, "that we felt like we had characters that were being taken seriously and given a chance to live their best life."

And believing women isn't just a theme or an undercurrent — it's central to the main plot of this new Charlie's Angels. "We literally have a character who is essentially working at a big corporation and is not being believed or listened to by her bosses," Banks explains. In the movie, Elena (Naomi Scott) begins the film not as an Angel, but as a scientist who seeks help from the Angels after she realizes her company might be planning to use her new groundbreaking technology for evil purposes. "I know this piece of tech that I've created is gonna potentially kill people," Scott tells reporters during a short break in filming. "So, even though I'm scared, I can't let this just go unnoticed."

Elena's fears take her to the Townsend Agency and to Angels Sabina (Kristen Stewart) and Jane (Ella Balinska), and Bosley (Banks), which has been updated to be not just a person, but a rank within the agency. Other Bosleys in the film include Patrick Stewart and Djimon Hounsou, and casting multiple Bosleys of different backgrounds helps give the franchise an international update, according to producer Max Handelman.

"You're having Bosleys moving around the world with their own teams," Handelman explains to reporters. "In this case Elizabeth, her Bosley is called into duty to assemble this new team." The producer also revealed that Banks's character is the first former-Angel to become a Bosley.

Banks's role as Bosley also means that, for the very first time, the Angels won't be directly reporting to a man, but to a woman. "We have this whole network of women working together and supporting each other in ... the name of quote, unquote, good, which is just treating people well and being positive and self-affirming," Stewart tells reporters on set. But it's not just the all-women nature of the team that will set this Charlie's Angels apart.

In an effort to make the franchise a little more grounded and empowering, versus being a male fantasy, the fans will see these Angels struggle, the cast teases. Stewart notes that these Angels are not "three superhuman women that are sexy and perfect." This time around, she promises, audiences will be able to see all the hard work that goes into kicking ass. "When was the last time you saw a movie where a group of women were sitting together and figuring out how to overcome something?" she says.

At the end of the day, every version of Charlie's Angels has always been all about girl power and women working together to get stuff done. And this new installment will be no different. "That whole feeling that 'it takes a village' is something that I respond to, and that I wanted to tell a story about," Banks says. "I love the idea of doing it in this movie."

So, yes, Charlie's Angels is giving the franchise a much-needed feminist update, but it's also embracing what the original was always about: women embracing women, while taking the bad men down.