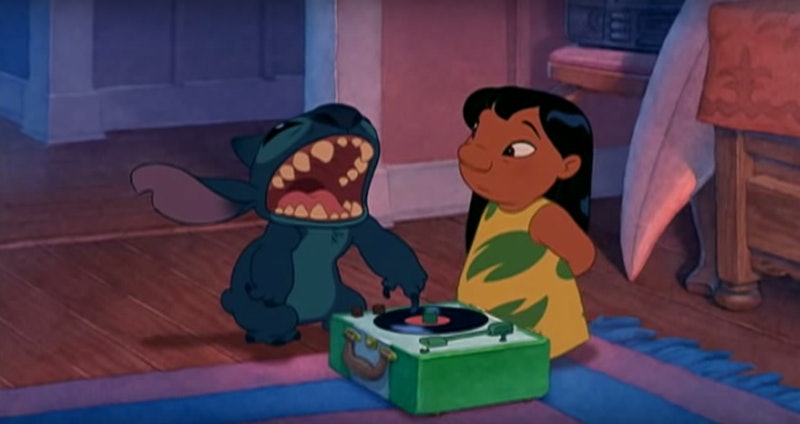 It's not unfair to say that Lilo's introduction to Disney audiences was an unconventional one. Rather that getting some beautiful ballad to announce her arrival on the scene, we meet a young girl who pummels other girls and makes tries to use voodoo (practically, of course). In Lilo & Stitch, it's Lilo's unconventional feminist power that makes her a model for future female Disney characters like Merida from Brave, Moana from Moana, and Riley from Disney/Pixar's Inside Out. Lilo helped break the mold for what a young feminist could look like, and she reshaped it in her own image.

Of course, Lilo might not look like much of a role model when you meet her. In the opening credits, Lilo rushes off the beach, gathering her things for dance practice and only pausing to take a picture of an overweight beachgoer. When she arrives late to dance practice and explains she was late because she had to feed Pudge, the fish who controls the weather, it's clear that Lilo sees the world a bit differently than everyone else.

It doesn't help my argument that Lilo is a feminist when we see her beat up another girl after she is scoffed at and called "crazy." Nor does it help when Lilo attempts to get voodoo revenge on the girls who laughed at her in class while the social worker is visiting her older sister, Nani. Lilo also fights with Nani constantly. It doesn't help that when the social worker, Cobra Bubbles, comes to check in on them she tells a tall tale about Nani mistreating her.

But Lilo's messy and imperfect introduction helps us to better understand why it matters that she is here. She is young and she is learning; she's not supposed to be a perfect hero. Lilo is a young hero of color who driven by love. She loves as hard as she fights and she is often quietly fighting to keep her family together as best she knows how. Even though she fight like crazy with her sister, she tries to support Nani and be the best sister she can be.

Even better, Lilo marches the beat of her own drum. This is a classic Disney trait, but Lilo's drum really does look and sound different that other Disney characters. She's a bit morbid, she's dramatic, and she has a wild imagination. She's comfortable being an outsider and because of this and her unique approach to life, she happily accepts Stitch when she meets him, even though she knows he's an outsider, too. She fights for him, she supports him, and she cares for him deeply.

Lilo's mold for future female Disney characters is simple: it's OK to be imperfect or rough around the edges so long as you are guided by your own moral compass. You can mess up, you don't have to play by the rules, you can get your hands dirty, throw traditional femininity out the window, and create your own rules; it's okay to be the kind of a young woman. This younger version of a Disney hero is clumsily, loudly, and happily coming-of-age in very offbeat ways. It's why we love Lilo.

It's certainly not the same at the older Disney princess model, where the women may have been seemingly perfect, without sin or fault, or so good-natured they can end up being damsels in distress. In Lilo's case (and Merida's and Moana's and Riley's), this subversion of Disney-fied expectations is so freeing; if young women are imperfect but ferociously true to themselves in real life, why can the young women they watch on film act the same way?

You'd be hard-pressed to find someone like Lilo in another Disney movie. Sure, Merida, Moana, and Riley are like her, but there can be only one Lilo. Thank goodness, because this young woman an incredibly important Disney hero.