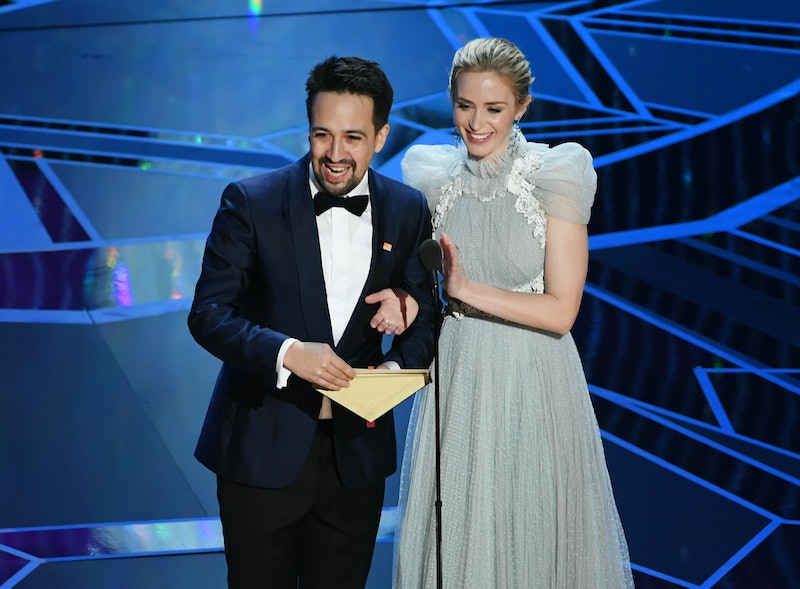 If you're one of the very few people who needs more reassurance that Mary Poppins Returns is going to be a delight, take a look at these behind-the-scenes videos of Lin-Manuel Miranda and Emily Blunt singing Disney songs for proof. The pair appeared in several videos together, posted by the Disney Studios Instagram account, and they're brimming with laughter, joy, and above all, charisma.

The most recent post went live on Thursday, Oct. 19, and it has something for everyone. Do you like Disney songs? Duets? Gentle ribbing? Imagining Miranda playing Princess Jasmine from Aladdin? Hopefully your answers were "yes, yes, yes, and yes," because that's what's coming at you in this video. In it, a fresh-faced Miranda and an immaculate Blunt crowd together in frame, singing an iconic Disney duet back and forth to each other. And while it sadly isn't a reveal of an original song from the upcoming Mary Poppins Returns, there's still reason to get excited. The actual song they sing to each other is just as good: "A Whole New World" from Aladdin.

"I can show you the world," Blunt sings to her costar, one arm slung around his shoulders, with a coffee cup clutched in her other hand. Miranda looks at her coyly for a moment, and then launches into the next line right along with her. "Shining, shimmering, splendid," they sing together, before cutting out midway through the next part. "Tell me Princess—" they both begin, before Blunt gently scolds, "No you're the princess!" Miranda grins, acknowledging, "Oh, thank you!" before sitting back and soaking up the music. That lovely duet lasts for about two seconds, until Blunt visibly blanks on the lyrics and he jumps in to help, the two laughing happily both at and with each other as the video comes to a satisfying close.

It. Is. Perfect. And it bodes incredibly well for the onscreen partnership that fans will be seeing when Mary Poppins Returns hits theaters on Dec. 19. Not only do their voices sound wonderful together, but they have such a joking, relaxed ease together that their chemistry is sure to be off the charts. Even just from a few seconds of video, it's clear that the two enjoy spending time with each other, think one another are funny, and feel comfortable enough for a little gentle ribbing, so imagine what they can do with a whole feature film's amount of time. Even the captions and hashtags are hilarious, with Miranda writing, "Aladdin rehearsal" as the caption, before adding the hashtags: "#Linstagram, #MaryPoppinsReturns #IAmThePrincess #WeAreNotInAladdinWeAreInMaryPoppinsReturns." (You know, just in case there was any confusion.)

And as mentioned, this is hardly the first time that this dynamic duo has cropped up in Disney Studios' posts. Miranda took over the feed all day Thursday, and during that time he added two photos of himself and his costar, one in costume and one out of it, as well as two adorable videos.

Each posting, whether an image or a video, is just more proof that the two are an incredibly good match. Maybe even a supercalifragilisticexpialidocious one! And when put all together like this, it makes it feel like Dec. 19 can't come quickly enough. (Although if the delay means that LMM will post more videos like this one, then maybe the wait is worthwhile after all.)

More like this
Taylor Swift Wanted To Be In 'Twilight: New Moon,' According To Its Director
By Grace Wehniainen
Coldplay Surprised Fans At Wembley Stadium With This Special Guest
By Frances Stewart
Shakira Joked About An Early 2000s Video Of Her First Camera Phone Encounter
By Stephanie Topacio Long
Twitter Is At Odds Over Taylor Swift’s Possible ‘All Too Well’ Oscar Run
By Brad Witter
Get Even More From Bustle — Sign Up For The Newsletter