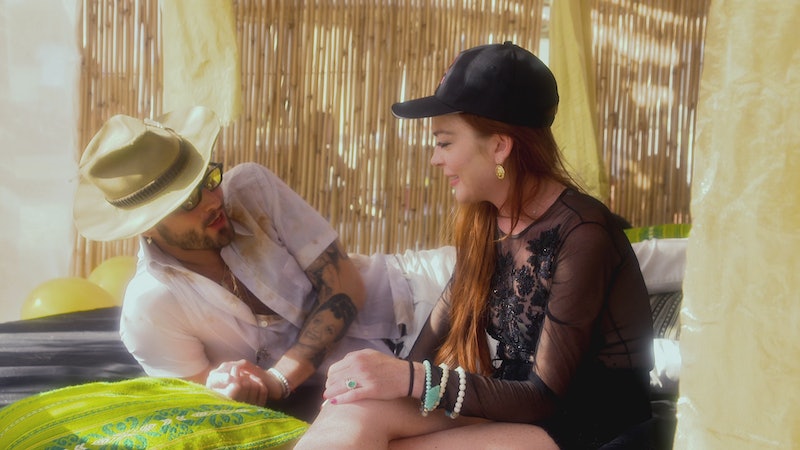 Finally, nine episodes in, Lindsay Lohan's Beach Club centered the bulk of its drama around the real reason most fans tuned in to the show in the first place: Lindsay Lohan herself. This week, she got a special visit from her friend and rumored former flame, Nico Torotella. However, Nico's arrival at Lohan Beach House raised a whole bunch of questions about what actually went down between the two of them back in the day, given that they had an "engagement" that the press took hold of. (In 2013, Lohan posted a picture of Nico on their knee saying that it was the first time someone proposed to her.) Luckily, a timeline of Lindsay Lohan and Nico Tortorella's relationship will help fill in some of the blanks — their friendship is actually not all that complicated.

In 2019, Nico, who stars in Younger, hosts a podcast about sex and romance called The Love Bomb. They're also married to pilates and fitness guru Bethany Meyers. In fact, Bethany also sort of fits into Nico's semi-confusing history with Lindsay.

Lohan said in an interview on the show this week, “Nico Tortorella and I were friends for a long time. And yes, we were ‘engaged,’ but we’re like brother and sister when we’re together. Loyalty is really important to me. I’ve lost a lot of friends in my life from being, you know, unloyal to me. If you lie to me once, I will never trust you again. But that’s why Nico was really special to me." Here's how they know each other.

Speaking to InStyle, Nico mentioned that they met in 2006, but their marriage is anything but conventional. "Bethany and I have been together in one way or another for 12 years and we are the exact opposite of a traditional marriage. We don’t even live together, and we are queer and polyamorous," they said. While this isn't to do with Lindsay directly, it does put any relationship they had (or didn't have) in context.

E! Online estimates that Lindsay and Nico started their friendship back in 2011, based on a picture Nico published of the two of them together at Six Flags. Unfortunately, the picture has since been deleted.

Complex followed up on Lohan's infamous 2014 sex list, which was a list she published of all the people she'd had sex with. Complex estimated that she and Nico had started their supposed fling sometime around 2013. Of course, neither Nico nor Lindsay have confirmed what exactly they started, and whether it began in 2011 or 2013. This is likely just a lot of speculation that's really nobody's business.

Lindsay posted a picture of Nico down on one knee sliding a ring on her finger via her Instagram story, per The Wow Report. The caption read "My first proposal," but sources like The Wow Report and Us Magazine seemed to be in agreement that it was just a joke.

Despite rumors of her dating model Christian Arno Williams, The Daily Mail reported, Lindsay told Australia's KIIS 1065 radio show that she was, in fact, still single. "I do not have a boyfriend," she said, adding "that can be confirmed."

Lindsay posted a silly pic of Nico messing around in her Manhattan apartment, per The Daily Mail. On the counter to the back right, it's possible to see a bottle of Ketel One vodka, which had fans and commenters talking in droves about whether or not Lindsay had started drinking again at the time. But rather than seem to spur on dating rumors, another post from The Daily Mail, mentioned that the reason the two were hanging out that night was because Lindsay was attending a pasta party thrown by Nico and Bethany as a couple.

As previously mentioned, Lindsay released a hand-written list of all the people she'd claimed to have sexual relationships with, aka The Sex List, which included Nico Tortorella. In Touch published the list, first censoring parts of it but slowly revealing it in full. E! Online claimed they wouldn't be surprised if the rumored fling had actually taken place, but given all the rest of the evidence, it hardly seems like a sure thing.

Nico and Bethany got married in a courthouse wedding ceremony last spring, People reported. Nico's caption might have been a cheeky nod to his fictitious betrothal to Lindsay, as he wrote: "just married. for real."

Based on when #DoTheLilo went viral, filming for Lindsay Lohan's Beach Club took place over the summer of 2018. Clearly, at that point, Nico and Lindsay were in a good place as friends, as is clear from their interaction on the show. And there's no reason it should be any different.