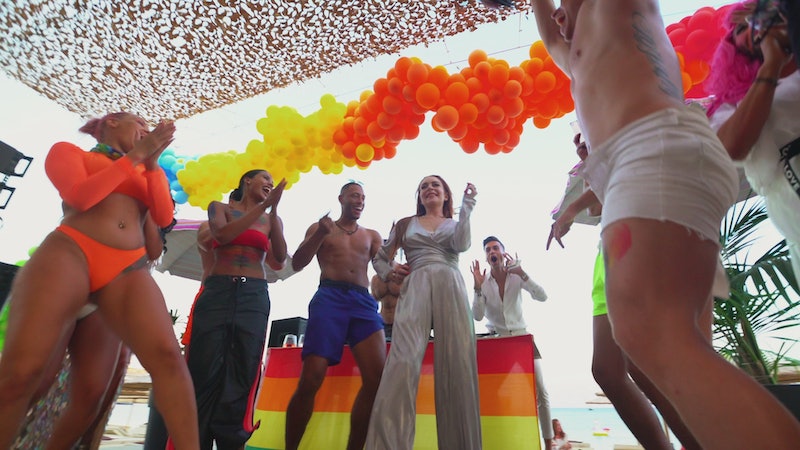 One seemingly uneventful day in the late summer of 2018, a curious video started making its way around Slack chats, Whatsapp groups, and Facebook feeds across the globe. At the time, Lindsay Lohan had been laying relatively low, compared to the deluge of press coverage she'd received in the past. Then, all of the sudden, there she was: jumpsuited up and bend-and-snapping in front of a DJ booth in Mykonos. The scene was so seemingly random, and so utterly impossible to look away from, it quickly went viral, branded with the hashtag #DoTheLiLo. Now, eight episodes into Lindsay Lohan's Beach Club, the real story behind #DoTheLiLo has come to light, and the whole thing actually makes perfect sense.

Halfway through the summer in Mykonos, Lindsay has finally fired her second VIP host. Previously, Jules Wilson got the boot for having too little personality. This time, Kailah Casillas got sent packing for giving her boss far too much attitude — and honestly, it was about time.

While Lindsay's an atypical boss, to say the least — going into your employees rooms and mocking them for being untidy isn't exactly how a manager at an Olive Garden would handle things — all the VIP hosts did sign up for an MTV series called Lindsay Lohan's Beach Club. What exactly did they expect?

Kailah was so disillusioned with Lindsay's behavior that she simply couldn't keep her mouth shut, and confronted her boss about it all. Lindsay made short work of letting her go, right in the beginning of the episode. This raised the question, how could the drama possibly pick up from there?

But pick up it did, and in a surprisingly feel-good kind of way. Brent, who had been making homophobic comments to Aristotle, actually decided to get over himself and do a drag performance for the club guests. Alex decided to apologize for his careless comments on bisexuality to Mike and salvage their friendship. Then, minutes from the end, the highlight of the episode came, not in a booze-filled shouting match or tearful attempt at reconciliation. It was Lindsay herself, and the original #DoTheLiLo, FINALLY put into context.

Out of context, The LiLo dance, first captured and posted by Neil Wang, was a head-scratcher. Clearly, she was having a great time in Mykonos, but what did it mean?

On first viewing, #DoTheLiLo kind of looked like Lindsay might just be stealing the spotlight from unsuspecting partygoers in Mykonos, putting on an impromptu performance of her own volition. But in reality, the stage was an actual stage where Mike, Gabi, and Brent had just performed. Lindsay had been happily cheering from the dancing crowd, when Panos — who is kind of the real mastermind of Lindsay Lohan's Beach Club, let's be real — decided to bring her up on stage.

Lindsay and Panos were both happily voguing for a few bars, when everyone started to chant Lindsay's name. In the longer clip shown on the show, you can see that Lindsay is actually pretty embarrassed at everyone shouting for her to dance, but, professional star that she is, she doesn't miss a beat before breaking it down.

After seeing the whole thing the way is was meant to be recorded, it begs the question, how the hell did Panos not get more press the first time around? He is literally impossible to miss in the viral video, cheering his heart out for Lindsay like the ultimate pageant mom.

Now, it all makes perfect sense. The whole purpose of Lohan Beach House is to create a brand based on people having fun, feeling comfortable, and getting to live like Lindsay Lohan for a day. The LiLo dance is both a symbol of the brand, and a celebration of it, and — most importantly —this is how you throw a party in Mykonos, bitch.

This article was originally published on Feb. 26, 2019