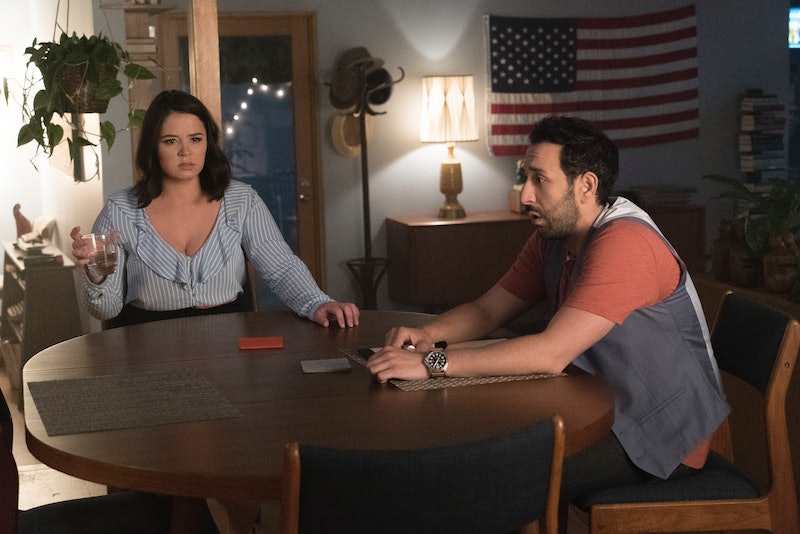 Talk about Gretchen and Jimmy and their angsty, You’re The Worst love story all you want, but their relationship is so not the most interesting part of the show. That award goes to Gretchen’s ne’er-do-well best friend and partner in crime. Lindsay isn't ready to love or be loved on You're The Worst, and that's an important story to tell. While Gretchen and Jimmy’s fallout is the star of Season 4, Edgar and Lindsay and how the breakup affected them has a greater role (that’s great for everyone). But the more viewers see Lindsay, the more it’s obvious that she is not quite ready for adulthood or emotional commitment of any kind.

Lindsay has always been compared to her older sister, Becca, even though Becca is as much as a trainwreck as Lindsay (she just holds it together better). They have a contentious relationship, to say the least. But now, four episodes into Season 4, Lindsay has a job (first time for everything) and Becca has a baby she doesn’t really seem to want (Tallulah, who is adorable), and well, things are a little bit uneven. Becca seems jealous of the fact that Lindsay has a job and is independent and divorced from her ex-husband, Paul, and though Lindsay has not a maternal bone in her body (she did stab Paul once, just saying), she sure steps up to the plate when Lindsay and Gretchen find Becca slumped over in the bathroom, drunk, the baby crying. (She’s not a new person, completely, though, since she screams, “Drag the deadbeat [Becca] out of the shower and force-feed her coffee until it shoots out of her butt!”)

In any other show, the following monologue from a character would signal that she was ready to find a man to have a baby with, or at least go and adopt one on her own:

“I guess I didn’t realize it, but I’ve actually never felt love before in my life. Not real love, anyway. But as I stared at that baby, I felt my heart swell. And in that moment, I knew that even though the magical feeling came with the possibility of one day losing it, the pain would totally be worth it. All of my life, I’ve been trying to resist that feeling, but I couldn’t anymore.”

But because Lindsay is just starting to feel out this whole “adult relationship” phase of her life, this is how that passage ends:

“And that knowledge forced me to really think about my future, because, you see, it was all too vulnerable, and I never want to feel that way again. I never want to care about something that might go away. So, I choose for my job to be my everything.”

Just when you think that You’re The Worst is going to turn a corner and be a hackneyed mess and you’ll have to find another favorite show to watch (that was my train of thought, at least), they set it straight! Lindsay has made leaps and bounds when it comes to her personal relationship, but she still is trying to figure it all out. Lindsay jumped into a relationship with her ex-husband Paul way too soon, and she ended up stabbing him rather than spend time with him. Instead of being incredibly needy like she used to be, Lindsay’s pendulum has swung in the complete other direction. Then, she didn’t know what to do when she was alone, and she didn’t know how to rely on herself. Now, Lindsay wants to use Edgar as a sex buddy so she can scratch that itch without having feelings involved. Now, Lindsay wants the least amount of emotions in her life, lest she open up and get hurt.

While being alone is better than being completely dependent on other people, Lindsay will eventually have to realize that no man is an island. The brilliant thing, though, is that You’re The Worst is letting Lindsay explore every facet of adulthood. It’s not always easy, becoming the person that you’re meant to be, and You’re The Worst is putting Lindsay’s journey out there, warts, drunk sisters, pangs of fleeting maternal feelings, and all.