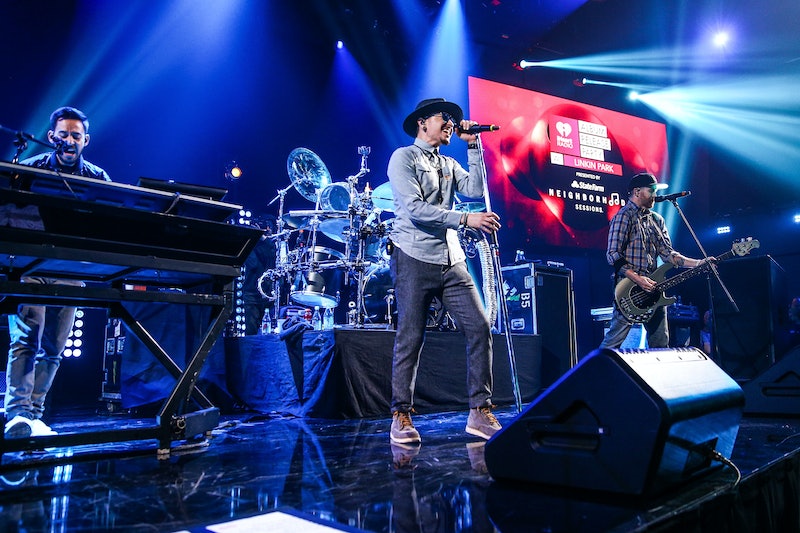 In a decision that every fan will surely understand, Linkin Park has canceled their North American tour, according to the Associated Press. The announcement comes a day after singer Chester Bennington died after reportedly committing suicide. The tragic loss of Bennington shocked musicians and fans alike, and there's no way the band's tour would have been the same without him. Plus, this decision gives all involved the ability to take the time necessary to grieve.

Per AP, Live Nation will be offering refunds to ticketholders and released the following statement:

"We are incredibly saddened to hear about the passing of Chester Bennington. The Linkin Park One More Light North American Tour has been canceled and refunds are available at point of purchase. Our thoughts go out to all those affected."

It's definitely a respectable and more than understandable move for the group to not carry on the tour without Bennington — at least not at this time. It likely feels too soon for both the band and fans alike, as the tour was slated to begin next week.

On Thursday, Linkin Park honored Bennington's memory with a photo tribute on Twitter and Facebook. They shared a powerful picture of the singer in his element, completely surrounded by fans.

Earlier that day, bandmate Mike Shinoda confirmed the news of Bennington's passing in a tweet. He wrote,

"Shocked and heartbroken, but it's true. An official statement will come out as soon as we have one."

Though the band's official statement has yet to be released, there's no doubt they will honor his memory in some capacity in the near future. That's a safe bet, given how close the band members were and how dedicated their fans are.

For now, it makes total sense that everyone is taking a pause. Bennington left a major mark on the music industry during his time with Linkin Park, and touring without him just wouldn't be the same, especially right now.