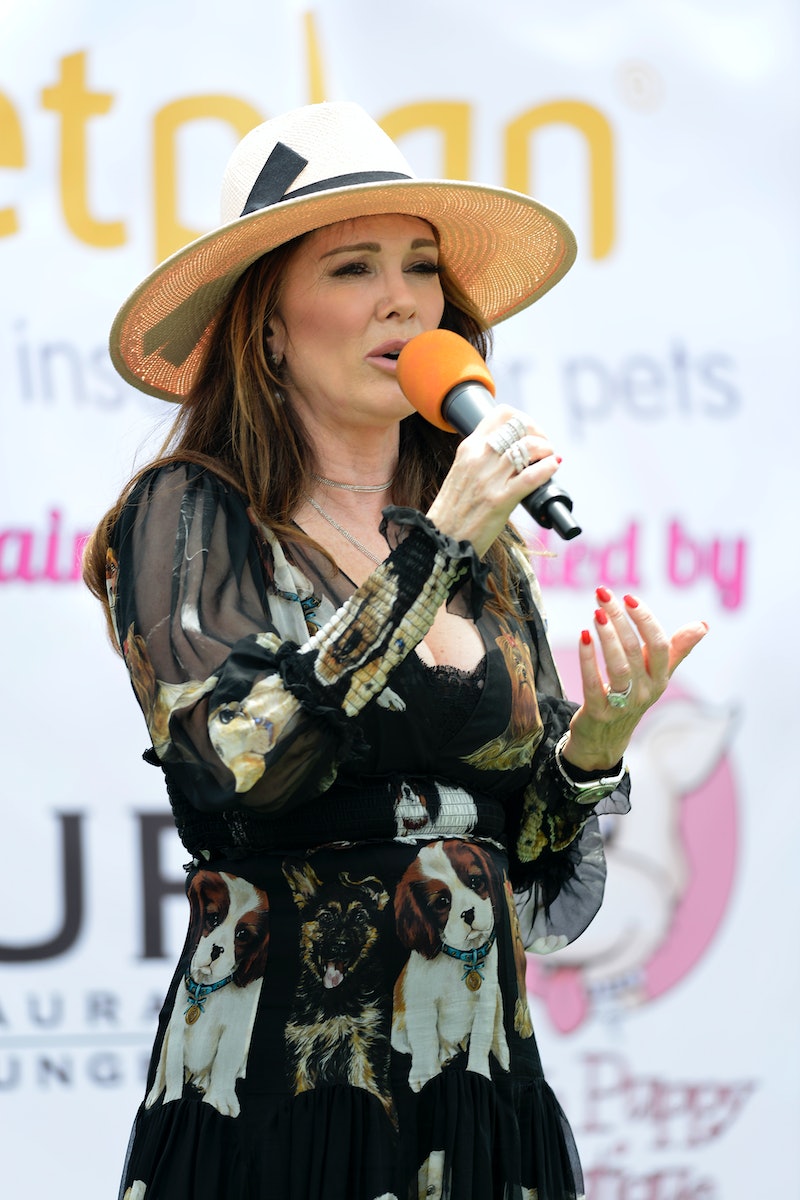 LVP is lending her voice to help combat what remains a sad reality for so many LGBTQ+ youth. As seen in Lisa Vanderpump's PSA for The Trevor Project that she shared on her Instagram account on June 3, the Real Housewives of Beverly Hills star emphasized that there is help available for young people struggling with identity and mental health issues. As explained on The Trevor Project's official website, the organization aims to provide crisis intervention and suicide prevention services to lesbian, gay, bisexual, transgender, queer & questioning (LGBTQ) people under the age of 25.

In the video, which was filmed at Vanderpump and husband Ken Todd's Beverly Hills home AKA Villa Rosa, the RHOBH and Vanderpump Rules star addressed just that in an impassioned plea aimed directly at embattled members of the LGBTQ+ community:

"I know how important it is that LGBTQ youth ... get the support they deserve. The Trevor Project is always here for you 24/7. If you're considering self-harm or suicide, please reach out to TrevorLifeline anytime to speak to our trained counselors. It's confidential and free and we'll always be here to support you. Taking your life is not the answer. Reaching out to Trevor is the place to start."

Announcing the PSA on their website, The Trevor Project also noted that, last year, they served over 68,000 calls, texts, and chats from LGBTQ youth in crisis. Further explaining that TrevorText and TrevorChat are now available 24/7, the organization stressed that, "together, we can build a future where every LGBTQ young person knows they are valid, loved, and worthy of dignity."

The same day the video dropped, Instinct Magazine shared an exclusive behind-the-scenes look at LVP's collaboration with The Trevor Project. In the clip, which was filmed for RHOBH, she explains that she has personal experience with the suicide of a loved one and has "an understanding of the devastation that radiates through a family.”

Of course, she is referring to her brother Mark's tragic passing at age 59 last April. According to People, drug toxicity was determined to be Vanderpump's only sibling's cause of death, with the coroner classifying it as a suicide. In the Season 9 RHOBH premiere, LVP said that she believes that Mark's death was accidental and "a cry for help that went terribly wrong."

In a confessional from RHOBH which Instinct posted, LVP also shared: “Sometimes people don’t realize that suicide is a permanent solution to a temporary problem. When this happens there are so many broken hearts left behind. So many people that could’ve been there.”

LVP also expressed that, as a "straight ally to the gay community," she takes very seriously the difficulties that LGBTQ+ people face and that there is still much work to be done.

“I’ve connected to many people over the years through reality television, through supporting Pride, through officiating same sex marriage, through being a spokesperson for GLAAD, and I take it very seriously that I think youngsters in the LGBTQ community are something like three or four more times likely to commit suicide than their straight counterparts,” she told Instinct. “And to me that’s a sad state of affair when one in four youngsters are thrown out on the street when confronting their parents about their sexual orientation.

Although the BTS moments of her Trevor Project PSA were filmed for RHOBH, LVP tweeted that fans likely won't see the footage in the remaining episodes of the Bravo reality series. In fact, LVP may not be in the rest of the season at all. Replying to a fan question, she wrote that Bravo "cut out all" of her philanthropic scenes, including The Trevor Project PSA.

That revelation, of course, came on the heels of LVP admitting she may not return to RHOBH next season or appear in the upcoming Season 9 reunion. Following endless friction with her fellow castmates this year, she told DailyMailTV, in an interview published on June 4 that "they've made it pretty impossible for me to go back frankly."

Nothing is set in stone, however. The same day, Bravo issued the following statement to Bustle: “There is so much great drama and fun still to come this season including the ladies’ trip to France, so before we focus on next season, let’s see where this one takes us."

Fans will certainly be tuned in to see what "drama by Bravo" comes next. In the meantime, however, LVP's focus seems to be on shining a light on the struggles of those in the LGBTQ+ community, instead.