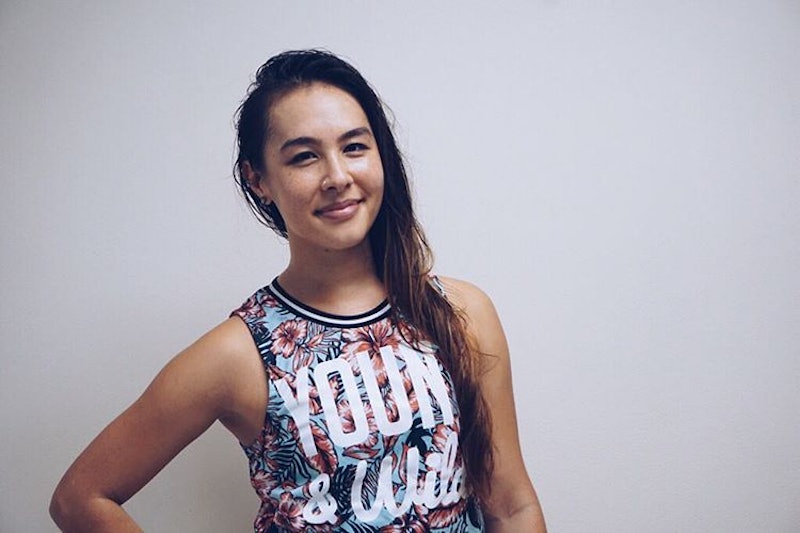 During a time when many of us are concerned about what the current political climate might mean for our personal safety, happiness, and legal protections, one woman is trying to capture the good in the world through her photography project Little Being Big World. "When I find people who are different from me, but also share a poignant truth, I try to capture this," creator Sidney Henne explains in an interview with Bustle. "My goal [with] Little Being Big World is to share positive stories of places or people with as many people as possible."

Henne, 28, has lived all over the world, but now resides in New York City. She works in advertising as a brand strategist, but her passion project is all about making art and connecting with others. Henne started Little Being Big World back in 2014 as a means of documenting her travels and the people she met along the way who enriched her life. "At the end of the day, I’m a wide-eyed citizen of the globe looking to learn from people of different cultures and backgrounds," the self-taught photographer explains.

But in light of the 2016 presidential election results, Henne has turned her project to the political. After a close friend introduced her to the NastyNation project and Dancing for Humanity workshop series, she knew she needed to meet the people participating — and bring her camera.

"This is Tracy (@trayy_sea). She's dancing for humanity 'to embrace change and equality."' -@littlebeingbigworld

"Normally we're all so entrenched in our respective bubbles — for me it's the advertising bubble, or the New York bubble, or the bubble of my immediate friends and family," Henne explains. "I wanted to hear the stories and feelings of people I didn't already know. To hear what excited them and frightened them about the world we live in today. To share their stories with others." She also finds the positive energy in these circles inspiring.

Henne talks to women after the various NastyNation workshops and asks them questions about how they're feeling and what they're experiencing, Humans of New York style. She records their answers to display as captions for her photos, and posts a photograph of each woman on her Instagram account, @littlebeingbigworld, later on. In addition to a sentence about why each participant dances, each photograph also includes the following description:

Dr. MLK Jr. once said, "Those who love peace must learn to organize as effectively as those who love war." It's a trying time this week, as January 20 is almost upon us - bookended interestingly by both MLK Jr. Day and the Women's March on Saturday. In honor of MLK Jr., women everywhere, and in an effort to focus efforts on the good in the world - I'm going to feature some badass women I met recently from @nasty.nation.gives who have learned to organize. @nasty.nation.gives is an effort begun by a friend of mine to help channel our post-election energy positively. These beautiful women (and a few men!) have organized and participated in dance workshops, workout classes, and happy hours - donating all proceeds to @aclu_nationwide @plannedparenthood@humanrightscampaign and @theirc. Couldn't be prouder to share their stories.

"This is Alyssa (@alyxxg). She's dancing for humanity 'because it lets me connect with people and I believe that is the key to progress.'" -@littlebeingbigworld

The workshops are definitely unique: They range from dance classes, to workout sessions, to happy hours, and all of the proceeds go to organizations dedicated to protecting the rights of marginalized groups, including the ACLU, Planned Parenthood, the HRC, and the IRC.

"At the end of the dance workshop, we were invited to share our hopes and intentions for the future," Henne explains. "Many expressed their relief at finally finding a vehicle to channel their energy positively. Being in a room of 30+ men and women with uplifting spirits made me feel like every little effort matters. We change the world not only in big swoops, but in small actions every single day. And I knew what we were doing mattered."

"This is Carrie (@maroonhorizon). She's dancing for humanity 'to raise money for Planned Parenthood.'" -@littlebeingbigworld

There is a lot to be said for the power of community, especially during trying times. People engage in activism in different ways, but focusing on the positive and forging connections between yourself and those around you is absolutely a form of engagement that sometimes falls below the radar. If you want to follow Henne's project, be sure to follow her on Instagram and check out the Little Being Big World site. If you want to learn more about the NastyNation movement, give them a follow on Instagram as well.

More like this
9 Funny Instagram Locations To Use On Your Next Post
By Siena Gagliano
What Does POV Mean On TikTok? The Popular Acronym, Explained
By Emma Carey
Here’s How To Get Verified On TikTok
By Emma Carey
On TikTok, Users Are Pranking Their Loved Ones With Minions Makeup
By Emma Carey
Get Even More From Bustle — Sign Up For The Newsletter