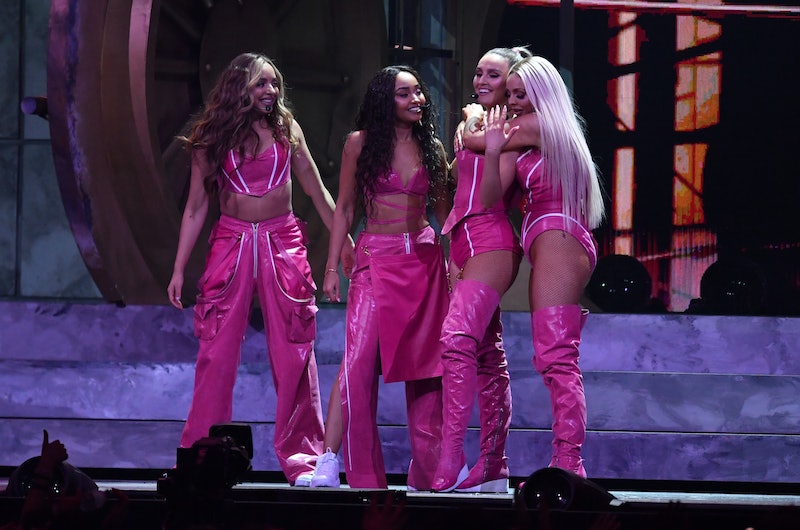 There's no arguing Little Mix are the biggest UK girl band out there right now. They are seriously doing the most. The four girls have become style icons and role models to their fans in their own right, and released their fifth album at the end of 2018 which became an instant success. Plus they aren’t afraid to stand up for what is right. Most recently Little Mix performed in front of a huge rainbow flag in Dubai where being gay is still illegal and, as the Independent reports, the queer community risks persecution.

The girls took to the stage at The Assembly in Dubai to celebrate the Global Teacher Prize on March 23. As ever, their performance was flawless but it was their show of support for the LGBTQIA+ community that has left a lasting impression.

Little Mix were part of an A List line-up which included Hugh Jackman, Liam Payne, and Rita Ora that gathered in Dubai to celebrate the Global Teacher Prize — a $1 million award presented to a teacher who has made a massive lasting difference in their community. Pink News reported that part way through Little Mix’s performance of "Secret Love Song Pt: II" a ginormous rainbow Pride flag appeared on the screens behind them.

The song whose lyrics include “Why can’t I hold you in the street? Why can’t I kiss you on the dance floor? I wish that it could be like that. Why can’t it be like that? ’Cause I’m yours.” has been a massive gay anthem since it was released in 2015. In fact, after the song's release in 2015, bandmember Jade Thirlwall confirmed the song is about loving whomever you choose openly and freely. As a member of the LGBTQ+ community, I couldn’t be more there for the girls putting on such an open show of support when being gay is still illegal in the United Arab Emirates.

According to Equaldex, a database that keeps track of LGBT rights around the world, in Dubai LGBQ relationships are still not recognised and gay men in the community can face up to 10 years in prison for “consensual sodomy.” The site reports that the LGBT community has no protection under law against discrimination and conversion therapy is still practiced in Dubai. This makes the girls stand with their LGBTQIA+ fans all the more meaningful.

Twitter lit up after fans saw the performance with one writing, “I’m just about to cry imagining all the closeted queer kids in Dubai’s audience who aren’t allowed to be open about who they are seeing a pride flag displayed on a massive stage during Secret Love Song."

This isn’t the first time that Little Mix have shown themselves to be amazing LGBTQIA+ allies. They dedicated a performance of "Secret Love Song Pt: II" to the the LGBTQIA+ community in Orlando, Florida after the shooting in Pulse nightclub in 2017. As London Pride kicked off in 2018 Thirlwall also shared a tweet of support to Little Mix’s LGBTQ+ fans. She wrote: “to all of our LGBTQ+ fans, we love you for who you are and are born to be. Pride is a time to come together, to celebrate and spread love and acceptance without exception whilst learning and knowing the history of why Pride exists in the first place.”

For Little Mix to stand on stage in Dubai under a Pride flag is a massive deal. Not only did the girls risk facing personal repercussions, they stood up for a community that is silenced in the UAE and often, around the world. Representation and celebration is important. I couldn’t be more here for Little Mix’s stand with their LGBTQIA+ fans.