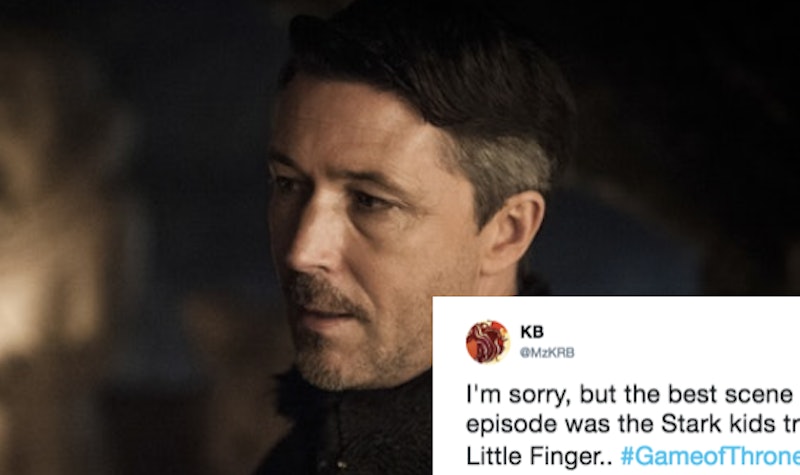 Ding dong the creep is dead. Finally, Game of Thrones' creepy, manipulative schemer Littlefinger got what was coming to him, and he got it in the very best way imaginable. Littlefinger died in the Game of Thrones Season 7 finale and fans on Twitter celebrated his death immediately.

The resident snake didn't just die on Sunday night, Littlefinger was murdered by Arya Stark who walked up to him with the casualty of someone waiting for the bus and sliced his throat with the dagger he gave her. Poetic? Indeed. What made the scene so fabulous was the fact that Sansa called Arya to the Great Hall in a way that made it seem like she was sentencing her to death for murder and treason. At the very last second, instead of asking if Arya admitted to the charges levied against her, she turned to Lord Baelish and asked him instead. In case there was any doubt of his guilt, Bran lent his visions as proof and Littlefinger was toast. Of course, this had fans on Twitter reacting at lightning speed, and people loved seeing this bad dude taken down by the Stark siblings.

Here are some of the best reactions to Littlefinger's last moments.

Some Fans Rated The Moment Above All Else

Arya Got A Lot Of Props

One this is certain, no one will miss Littlefinger's creepy ways. The Stark siblings banded together to bring the collective savagery, and fans are loving them for it.