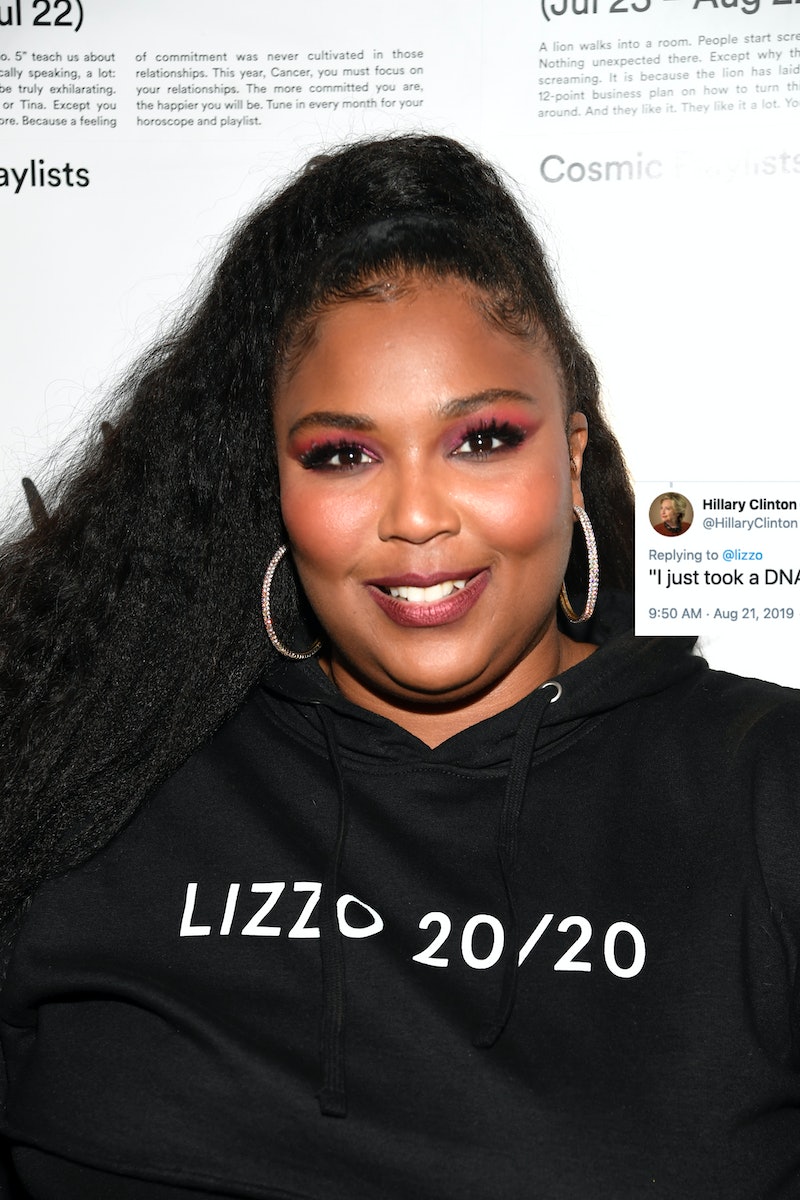 Guess who just took a DNA test and found out that she's 100% *that* b*tch? No, it's not Lizzo — everybody knows that she's been that b*tch. The newest Lizzbian on the block just happens to be a former Secretary of State, and you'll have to see the epic Twitter exchange between Lizzo and Hillary Clinton for yourself to believe it.

It's amazing. Actually, scratch that — it's not just amazing. It's so monumental that it could change the course of history. OK, that last part was a bit of an exaggeration, but what went down between the two women recently was definitely a big deal.

So, you know Lizzo's song, "Truth Hurts"? Come on, of course you do. Over the last year, it's basically been unavoidable in the best possible way. Well, on Aug. 20, Lizzo shared an edited clip of one of the 2016 Democratic Presidential Debates wherein "Truth Hurts" was the new National Anthem. Yes, you read that correctly.

At the start of the video, all five candidates are standing in a row with their right hands over their hearts. "To honor America, please rise for our National Anthem," an announcer says over a loudspeaker.

Then, those distinctive piano notes from the intro of "Truth Hurts" begin to play, and the camera pans around to reveal Clinton — the sole female candidate of the bunch — standing in the middle of the line-up. "Why men great 'til they gotta be great?" the track continues, as the shot settles on the candidates for a brief moment.

Now, Lizzo didn't add a caption to the clip — not that she needed to, really. The whole thing kind of spoke for itself. The video was, however, made so much better by what Clinton eventually chimed in to say.

Several hours after Lizzo posted her video, Clinton commented with a very brief, yet very entertaining response. "I just took a DNA test, turns out ..." she wrote. You know the line that comes after that, right? "I'm 100% that b*tch." So, Clinton just pretty much confirmed that she is, in fact, 100% that b*tch. What a revelation. So good. The internet has officially been won.

Clinton has actually been popping up in a lot of unexpected places on social media as of late. Earlier this month, she and her husband, former President Bill Clinton, attended Barbra Streisand's concert at Madison Square Garden in New York City. While backstage, the couple just happened to bump into the one and only Mariah Carey, who shared photos of herself with the Clintons and added an amazing comment of her own.

"An honor to meet President Clinton and her husband, former President Bill Clinton!" Carey wrote, seemingly not by mistake. "Thank you for everything you have done and continue to do for our country."

Oh, Mimi. Never change. Same goes for you, Mrs. Clinton. Keep doing what you're doing, and please continue to comment on epic videos like Lizzo's in equally epic fashions.