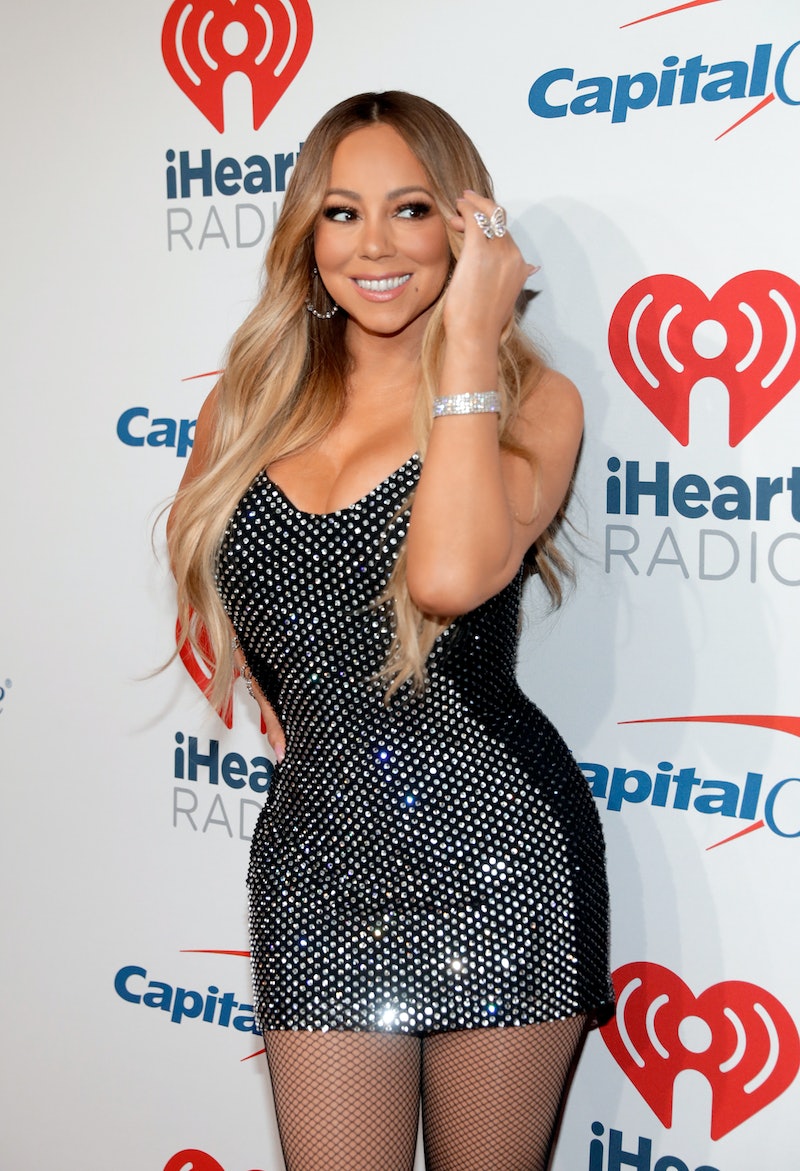 Mimi lives in an alternate reality. It's a reality where time doesn't exist, and therefore birthdays, age, and FaceApp don't exist either. It's a reality where the Chainsmokers are synonymous with One Direction, and where Donald Trump was never elected President, according to a pic the singer recently shared. On Twitter, Mariah Carey's photo with Hillary Clinton achieved instant icon status, but the caption? Well, the caption Carey wrote is like, next level. She's done you proud yet again, Lambs.

Over the weekend, Carey attended Barbara Streisand's concert at Madison Square Garden in New York City. "A LEGEND," she wrote alongside a photo withe singer. "Thank you @barbrastreisand for a magical evening," followerd by, "Living like Babs 'cause it's Evergreen." OK, so, it turns out she had not one, but *two* iconic moments that night.

Know who else was at the concert? Former Secretary of State and presidential candidate, Hillary Clinton, as well as her husband, former President Bill Clinton. Yep, that's right. Talk about a star-studded event. It's almost too much to handle already.

Buckle up, though, because it gets better. Carey didn't just get a pic with Babs that evening — she got a pic with both of the Clintons, too. The first photo was with her and Hillary, and FYI — the WiFi password for MSG is posted on the wall in the background, in case you ever need it. The second shot was with Bill, and it was hilariously photobomb by an elderly gentleman in the background.

Both pics were pretty major in-and-of themselves, but you *have* to read what Carey wrote. "An honor to see President Clinton and her husband, former President Bill Clinton!," Mimi captioned the series, followed by the smiley face emoji. "Thank you for everything you have done and continue to do for our country."

Did you get that? Reread it again, just in case. "An honor to see President Clinton and her husband, former President Bill Clinton." Yep, she did that. Carey referred to Hillary Clinton as President Clinton — and it's pretty safe to assume that she didn't write it that way by mistake.

By the way, is this a reality everyone can subscribe to? Willing to give up birthdays, age, FaceApp, The Chainsmokers and/or One Direction in return.

While Carey didn't openly speak out about the 2016 election, she did support Barack Obama in the past. Based on her recent photos with the Clintons, though, it seems like she's making it pretty clear which side of the aisle she stands on.

Carey has regularly been blessing us with meme-able moments as-of-late, and this latest installment is just another shining example of her transformation into Queen of All Things Internet. So, thank you, Mimi, for all that you do, and thanks for this glorious glimpse into your alternate reality.