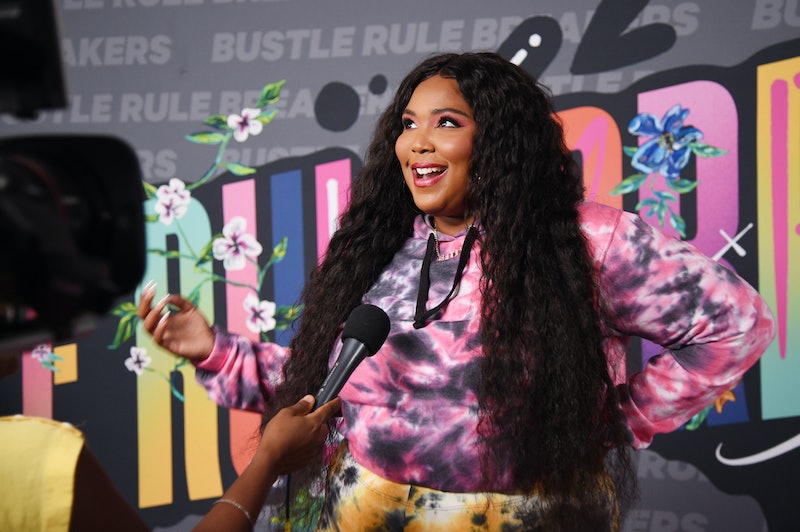 Ask any one of Lizzo's fans, and they'll tell you that she's inspiring for a multitude of reasons — and now, she's doing her best to empower them to seek out a leadership role in their communities. Near the end of her performance at Bustle's second annual Rule Breakers event honoring the year's biggest trailblazers, the singer and rapper encouraged fans in the crowd to feel strong and confident enough to run for office.

"I just want to say right now because we have so many incredible people here tonight, I just want to encourage my young girls, my young women of color as well, my young queer fam, and gender nonconforming [fans], I want to let y’all know that you are more than qualified to run this country," Lizzo said while onstage at the LeFrak Center at Lakeside, Prospect Park on Saturday night. "Do not let them make your identity that keeps you out of greatness, because that is what makes you great."

She continued, "this country has been run by the same kind of person for a long time, but the face of this country — you are America, this is what it looks like." As the crowd erupted in cheers, the rapper exclaimed, "I really believe this generation is going to change the American government and the way the politicians work."

She wrapped up her speech by telling the packed crowd at Prospect Park, "I truly believe that we can save the world if we first save ourselves." And while for some people, that might seem like an insurmountable task, Lizzo also told Bustle on the pink carpet earlier that evening that she knows the secret to saving oneself — and it starts with recognizing who you want to be.

"We think we’re being ourselves, but we’re actually being programmed to try and be something else or try to fit into a mold," she said, "and I think once we realize that this person that we were trying to be but that we could never achieve wasn’t us, and that the true us you don’t have to try, I think that’s the moment of liberation."

In addition to finding and celebrating her true self, Lizzo is all about celebrating the accomplishments of others — especially when it comes to other women of color working in the music industry. "I just think there’s so many incredible women right now making music and making a splash," she said on the pink carpet, after being asked about her dream girl group.

"It’s an exciting time right now to be a woman in rap and this is an exciting time to be a black woman in music, and we’re doing big things and making big waves," Lizzo said. "So, I mean, we are all one." Now, fans just need to take that philosophy and hit the polls.