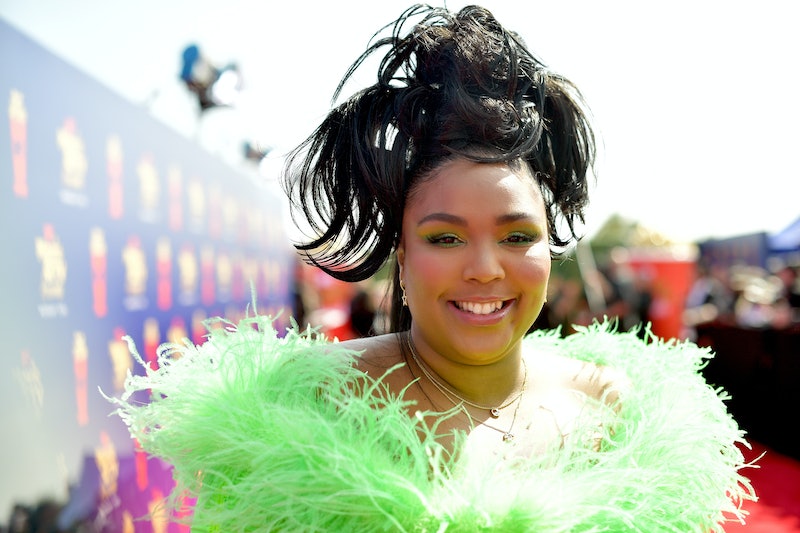 The “Cuz I Love You” singer is likely to perform one of her catchy “Church Twerk” tunes from her debut album that dropped in mid-April, but before she hits the stage, Lizzo arrived on the red carpet proudly rocking a ruched green gown that featured ostrich feathers around the collar. In addition to her eye-catching outfit, Lizzo sported a set of teardrop star-shaped earrings and paired them with a set of platform sneakers that were adorned with jewels, because why the heck not?

In nearly all of her red carpet appearances and performances, Lizzo has turned out eye-grabbing hair and makeup looks, so naturally, she stepped her game up even more for this big night. Lizzo wore her hair in a high updo, definitely meant to steal your attention. As for the “Tempo” singer’s makeup, it was anything but basic. Lizzo packed plenty of lime green and yellow matte eyeshadow on her lids to match her dress. To finish it off, she wore a soft blush and a glossy lip. Perfection.

This is an outfit that screams Grinch, and thick fashion lovers should take a note or two out of this Lizzo look.

Lizzo’s performance outfits have been out of this world as of late and they've proven anyone can rock eccentric finger waves. On June 14, the singer took the stage at the 2019 Songwriter's Hall of Fame ceremony where she performed a Missy Elliot song with Da Brat.

"I got introduced by Queen Latifah to sing my favorite Missy song ever FOR Missy with Da Brat for the songwriters Hall of Fame," Lizzo wrote in the caption of the post. "Thank you @missymisdemeanorelliott for all that you’ve done for black girls all over. I’m still sh👀k."

The rapper's performance brought fans back to the past when Missy rocked a similar set of finger waves in the '90s, but Lizzo's auburn tint made it modern and fresh. The singer even payed tribute to Missy and Da Brat in her actual outfit that read "Sock It To Me", a classic the two honorees collaborated on in the past.

Bold colors (with finger waves and fur) are a common theme in Lizzo's looks it seems — she encompassed both in her 2019 Met Gala outfit, too.

The singer rocked head-to-toe hot pink for the first day in May and wore a fuzzy pink Marc Jacobs jacket and pink hair with a finger wave, shaking the Gala with such a bright hue for her debut. Not to mention, the singer was so in love with her fuzzy pink Marc Jacobs coat that she ended up wearing it all the way to the airport for her flight.

Lizzo is one entertainer who takes her talents beyond the stage and onto the red carpet with bold colors and a statement-making hairdo. We can't get enough.

More like this
Harry Styles’ Red Carpet Looks Have One Thing In Common
By El Hunt
15% Pledge Director LaToya Williams-Belfort On The Impact Of Supporting Black Business
By Dominique Norman
Hailey Bieber Channeled Jackie Kennedy At Paris Fashion Week
By Allie Fasanella
Bella Hadid's Best Runway Looks Of All Time From Paris, Milan, & More
By Allie Fasanella
Get Even More From Bustle — Sign Up For The Newsletter