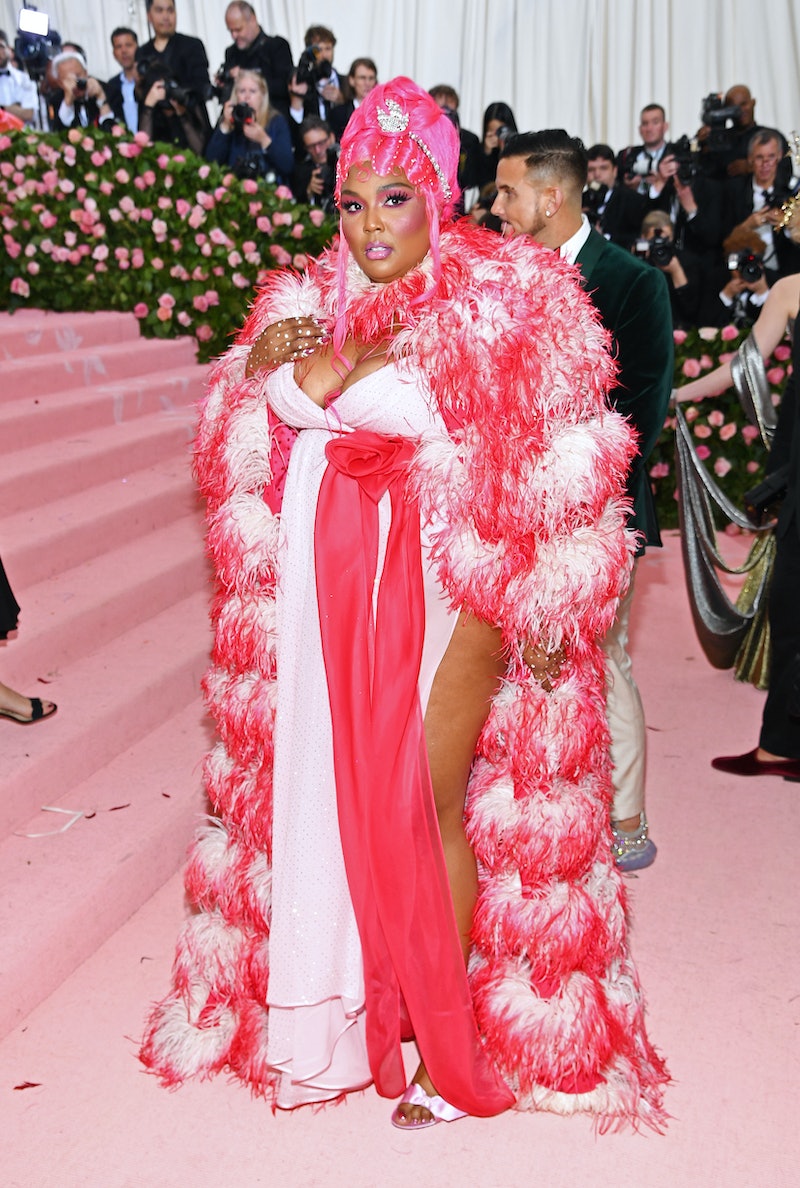 The 2019 Met Gala basically had all of your favorite celebrities except for event standouts like Rihanna and Beyonce (yes, it's okay to still be sad about it). However, some new faces appeared at the gala, but they had a flight to catch after. In a total boss move, Lizzo wore her Met Gala coat to the airport. Let's be real, the singer just released a new album, and she's got places to be. While she's fabulous all the time, why not add a custom Marc Jacobs feather cape.

At the 2019 Met Gala, the "Cuz I Love You" singer was dressed in head to toe Marc Jacobs and attended the event with the designer as well as other celebrities dressed in Jacobs' designs like Rita Ora and Kate Moss. While Moss and Ora looked great, Lizzo truly lived up to the camp theme and crushed the red carpet.

Lizzo's look was an all-pink dream. Everything from her dress to her wig was bright pink. The singer was rocking a empire waist soft pink gown with a thigh-high slit and hot pink sash. Over top, she wore the most fabulous pink feather coat that she clearly didn't want to take off because, well, she wore it to the airport.

In an Instagram story, Lizzo appeared at the airport the morning after the Met Gala, and she seems to have just not been able to part with that gorgeous Marc Jacobs feather coat, and who could blame her? It's the kind of coat you just want to sweep through your house wearing to live your rich lady fantasy. Lizzo just happened to do that in the airport.

In multiple videos, the singer waltzed in the most boss babe kind of way through the airport even pausing by a sign that read "Upperclass" to have a fashion moment. She posed while holding a teddy bear with a sleep mask that read, "Privacy Please."

To say it's a moment would be an understatement, and honestly, walking through the airport in your feather-covered Marc Jacobs coat is so camp. Basically, Lizzo's look was so good that she carried the Met Gala theme right into the next day because she's an icon.

Even Lizzo's inspiration for the look was pure camp. In a Twitter response, Lizzo revealed that her Marc Jacobs look was inspired by Shirley MacLaine's film What A Way To Go! which is often considered a camp classic. In fact, back in April, Vogue itself featured the film as one that could be added to Susan Sontag's references in her essay "Camp: Notes on Fashion," which was the entire inspiration for the Met Gala.

Clearly, Lizzo took notes from Vogue, and she and Marc Jacobs crushed the MacLaine-inspired look.

Not only did Lizzo totally slay the Met Gala red carpet in her Marc Jacobs ensemble, but she kept the camp theme going into the next day. Boarding a flight in a pink and white feathered coat is a total boss babe move and just the sort of over-the-top, fun moment that camp requires.