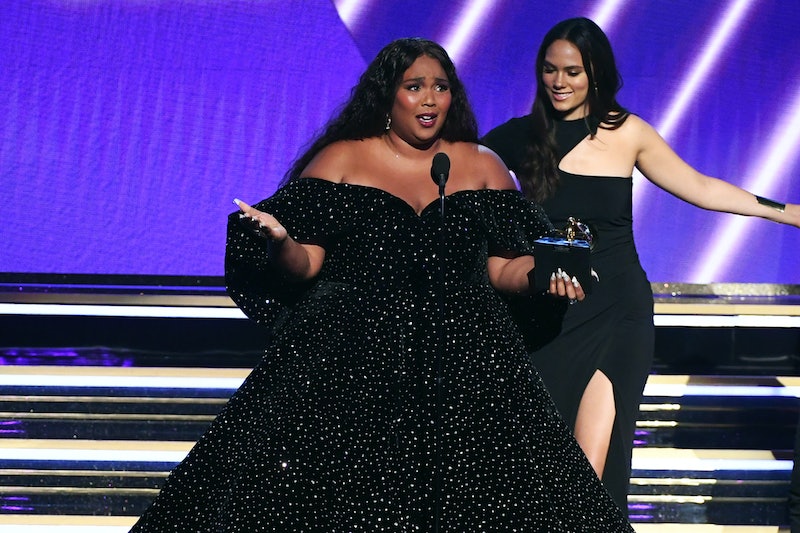 Further proving why she's 100% that b*tch, Lizzo's Grammy win included a Beyoncé tribute. As Keith Urban and Cynthia Erivo read the 2020 nominees for Best Pop Solo Performance for "Truth Hurts" during the Sunday night ceremony at Los Angeles' Staples Center, Lizzo had her eyes closed and fingers crossed, but she wasn't rooting for herself: She repeatedly mouthed the name "Beyoncé" who was nominated for her song, "Spirit" from The Lion King's soundtrack. The other nominated women in the category included: Taylor Swift ("You Need to Calm Down"), Ariana Grande ("7 Rings"), and Billie Eilish ("Bad Guy").

During Lizzo's Grammys acceptance speech, the eight-time nominee (she was also up for Album of the Year, Song of the Year, Best New Artist, Best Record, Best R&B Performance, Best Traditional R&B Performance, and Best Urban Contemporary Album), expressed shock over besting Queen Bey in the category. "What the f*ck?" she exclaimed onstage during the CBS telecast.

Lizzo explained to the audience she'd spent the week "lost in [her] problems" and "stressed out" — but her perspective had suddenly changed ahead of the awards show. "In an instant, all of that can go away and your priorities really shift," she said. "And today, all of my little problems that I thought were big as the world were gone and I realized that there’s people hurting right now. Let's continue to reach out, hold each other down and lift each other up."

The musician was likely referring, at least in part, to the tragic Jan. 26 death of basketball icon Kobe Bryant, 41, and his daughter Gianna, 13. Before she kicked off the night's performances, Lizzo dedicated her medley of "Cuz I Love You" and "Truth Hurts" to Bryant, declaring, "Tonight is for Kobe." The retired Los Angeles Lakers pro and his daughter were among those who died in a helicopter crash near LA on Sunday.

Before the telecast began, Lizzo had already won two other gramophone trophies: Best Traditional R&B Performance for "Jerome" and Best Urban Contemporary Album for her hit 2019 album, Cuz I Love You.

Following the announcement of her eight Grammy nominations in November, Lizzo reacted on Twitter, writing, "THIS HAS BEEN AN INCREDIBLE YEAR FOR MUSIC AND IM JUST SO THANKFUL TO EVEN BE PART OF IT," adding, "WE ARE ALL WINNERS."

It seems that the Beyhive wasn't alone in hoping Beyoncé (who did not attend the Grammys) was the actual Best Pop Solo Performance winner this year — but Lizzo's reaction truly was good as hell.