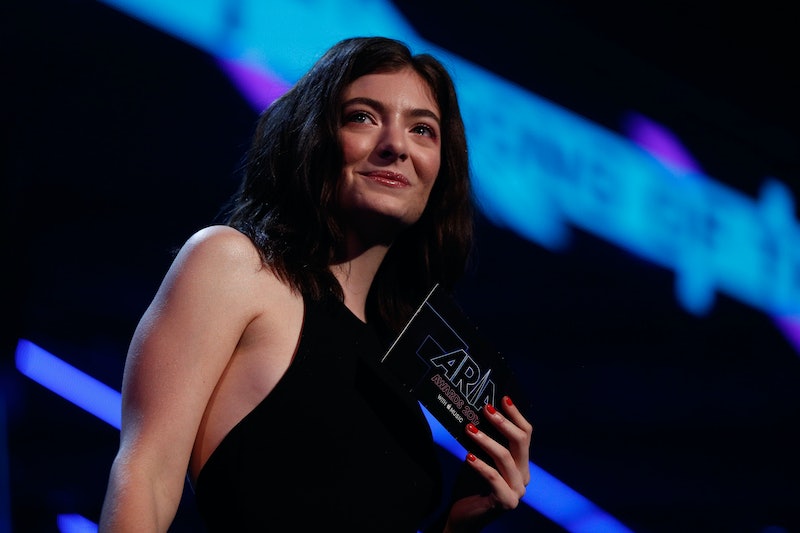 The best way to commemorate an anniversary is by making new memories. On Saturday, Lorde teased a third album in a post celebrating the anniversary of Melodrama. The singer shared a long text post on her Instagram Story about the two-year anniversary of her second album, and how much the singer appreciated fans making the album their own since its release. The star then went on to discuss how artistically draining making the album was, and how much she's grown into adulthood since its release. Lorde also revealed that she's spent the past couple years recharging, but a new album is in the works.

Lorde shared the message for fans on Instagram, starting with a few words of thanks for listeners. She wrote:

"Apparently Melodrama came out two years ago today.. Want to say thankyou for how you took that record and made it your own. Swells my damn heart thinking about your love for it and your willingness to go there with me and to dance the way we did together."

The singer went on to explain how the release took a lot of energy to create and release. "The day it came out i did a jigsaw puzzle all day in my hotel room in NY," she said. "I felt so emptied, I didn't really know yet that you make a record and get filled up, and then releasing it empties you..and slowly fills you up again."

Melodrama debuted when Lorde was just 20, and the star also went on to explain how much she's grown since the release of the album. "I was such a baby making that work, lots of emotions and learning so much all the time. Feels like I've grown a lot since then, I've been to Antarctica, i have a dog now and a cat and i can bake bread and cook dinner and keep plants alive etc," she said. "It's a good life you've given me. Thankyou thankyou."

Then, Lorde also revealed a new album is in the works, writing "Third one in the oven." The singer did not go so far as to reveal a timeline for the record's release, but fans can take comfort in knowing she is back in the studio despite the creative blocks she described in the post. Lorde also didn't reveal if she's working with Melodrama producer Jack Antonoff, though she did thank him in her message, writing, "Love to jack forever and ever."

Melodrama debuted in 2017 to both critical acclaim and mainstream success. In 2018, the album was nominated for an "Album of the Year" at the Grammy Awards. In an interview with the Recording Academy ahead of the show, Lorde described similar hesitations following the success of her debut album, Pure Heroine. She said:

"It kind of takes a second, I learned, to write your way out of the record you just made. There was a real hit of, like, 'I just don't have another one. It could never be good enough.' It wasn't until I went through heartbreak, and moved out of my parents' home into my own house and spent a lot of time totally alone, that I realized I do have very serious, vivid feelings I needed to get out."

It will be tough for Lorde to follow up the major success of Melodrama, but the singer seems to understand the time and space needed to compose a new record. As long as new tunes are in the future at some point, fans are sure to respect the singer's process.