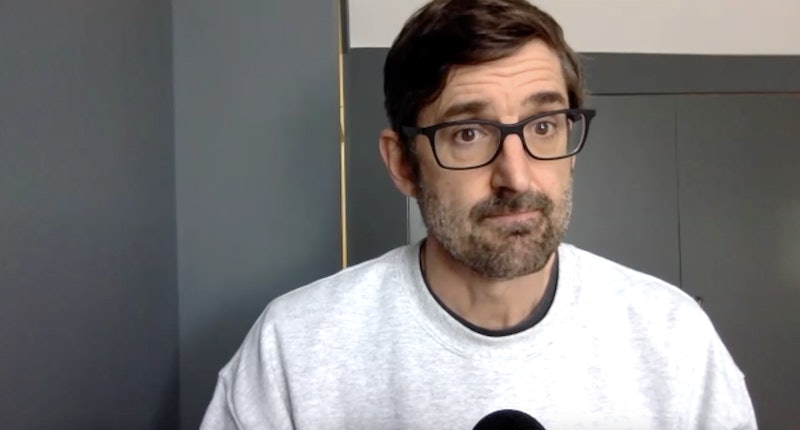 Every morning Louis Theroux exercises with Joe Wicks. Between 9 a.m. and 9.30 a.m. “like clockwork” he joins the front room fitness guru in working up a sweat. It’s just one of the daily activities that Theroux credits with keeping him on the straight and narrow during lockdown. Others include cooking, cleaning, and “those little tasks that mean that you actually look around.” As millions more across the UK have adapted to a life more simple, so has Louis Theroux.

Though he’s yet to make banana bread, Theroux assures me he was an early adopter of the now en vogue bake. As with Tiger King, Theroux was ahead of the curve – he was making banana bread "five, six, seven" years ago, he tells me. "My life hack is that, when your fruit – especially bananas – is going a bit soft, put it in a bag or a Tupperware container and freeze it. And then [when you have] five or ten, use them for banana bread, banana milk, smoothies.” And he has tips for those with banana–less fruit bowls, too: “Sometimes you make a smoothie and you're like, this is disgusting. Chuck three or four figs in it and you can almost always turn it around.”

It’s all part of Theroux’s drive to prioritise his personal health during lockdown. As the documentarian puts it, he’s been “making it his job” to find time and stay connected. “You have an increased sense of the value of life and the sense of the need to make your time count with people,” he considers. “I think I talk to my mum more often and in a more responsible or responsive way now than I did before the pandemic.”

When he’s not practising Spider-Man lunges or checking in with family, Theroux has also found his actual job to be a lifeline. “Work has been important for me,” he says. “I've been lucky that I've been able to scramble and get this work together. I know for a lot of people that's not an option.”

The work that Theroux is referring to is his new podcast, the first one he has ever hosted. Grounded with Louis Theroux was, like a lot of things in 2020, born of necessity. Theroux had been due to fly out to begin shooting not one but two new documentaries just days before lockdown called the world back inside.

As with all new projects, there was a certain level of anxiety involved in making Grounded. “I've got used to a certain way of working, which involves going on location, and I was aware this [would be] quite different,” Theroux explains, adding: “I can’t just extract myself from my home situation in the way that you can on location. On location, you have the luxury of [being] focused on the job at hand. Usually you're in a hotel and you get up and you've got nothing else really to think about other than the job.”

The calm manner and straightforward questioning that Theroux is known for are flanked by his tension-diffusing gaze, a combination that placates even the most reticent of interviewees. Is it possible to build the same rapport on a video call? “Clearly you're at this physical remove” he says, “although we use Zoom, so I have eye contact.” For each Grounded episode, Theroux speaks with guests for at least a couple of hours, making it more an extended conversation than an interview of any kind. “I think perhaps the biggest difference for me is that the conversations by their nature are less focused. Normally when I'm doing an interview for a documentary, it's not a free flowing chat. I've got a particular subject that I'm honing in on. I'm trying to find out and drill into – these are more like conversations where I want to talk about a few different things.”

The first episode – a chat with friend, “rival,” and fellow documentarian Jon Ronson – is an hour of shared stories. Between bird feeders, unacknowledged tensions, Robbie Williams, and situational depression, coronavirus barely gets a look in. “These conversations are really about much more than just coping with lockdown” Theroux insists, “like everything that I do, in the end, these are interviews with people.”

The first two episodes of ‘Grounded With Louis Theroux’ are available to stream now on BBC Sounds.