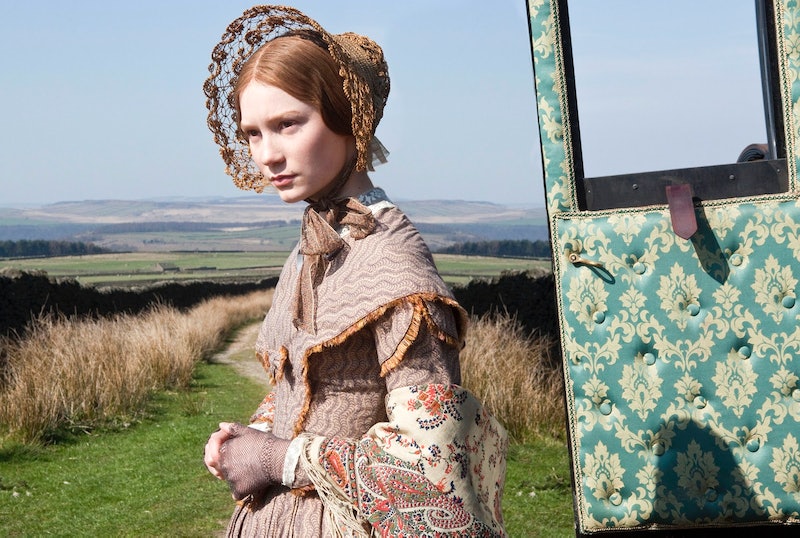 Maybe it's because I was named after author Charlotte Brontë, or because I, too, have a thing for standoffish, unattractive men, but I've always loved Jane Eyre. It's one of those books that has grown with me. When my mom first read it to me as a kid, it was a good old-fashioned story about a plucky orphan and a haunted house. When I read it myself, much later, it was the story of a young woman discovering her own independence, with some problematic romance and a whole lot of colonial baggage thrown in. If you love Jane Eyre, you know that it always has more to offer. Each re-read is a revelation. But, for the true Eyre addict, there is at least one other book that you simply have to read, to truly appreciate every dimension that Jane has to offer.

Firstly, though, some thoughts on why Jane has such staying power. Or, at least, why I've always been drawn to her. From that very first page, where young Jane is being punished for being solemn, and not cheerful as a child is supposed to be, I was hooked. I felt for Jane. I was always being told that I looked "sad" as a kid, which is essentially the little girl version of being told you have resting bitch face. Or even the innocent precursor to men on the street imploring you to smile.

But all through the book, Jane refuses to smile. That isn't to say that she's never happy (although you wouldn't be super chipper, either, if you were an orphan forced to go to an evil school where everyone died of fever). Jane just refuses to be happy on anyone else's terms. She won't be a charming, cheerful child if she doesn't feel like one. She won't follow St. John Rivers off on his nonsense missionary work. And she sure as hell isn't going to marry Rochester after finding out about his secret attic wife... at least, not until Rochester gets his life together and Jane figures out how to be happy on her own.

As Jane puts it, “I care for myself. The more solitary, the more friendless, the more unsustained I am, the more I will respect myself.”

And that's why the one book I'm recommending for all Jane Eyre lovers is The Eyre Affair, by Jasper Fforde.

Yeah, it's set in an alternate version of London where people have dodos as pets and time travel. But hear me out:

There are a lot of great books out there filling in the backstory of Jane Eyre, like the widely read Wide Sargasso Sea by Jean Rhys, which tells the story of a young, mistreated Bertha Rochester, a Jamaican heiress forced into a loveless marriage. That's certainly a story well worth telling, and one that explores some of the creepy, super imperialist vibes of the original novel.

And then there are the great riffs on Jane Eyre, like Lyndsay Faye's Jane Steele, about a young woman who murders her awful schoolmasters and ends up as a governess to a Mr. Thornfield. There are "sequels" to Jane Eyre, too, and several novels imagining the lives of the artistic, tragic Brontë siblings.

But The Eyre Affair stands apart from all of these, in my mind. It's funny, for one. And it's not just about our favorite characters from the book doing other wacky things, it's about reading Jane Eyre.

The Eyre Affair is the story of a woman named Thursday Next, who works as a literary detective. It's set in a reality slightly apart from our own, where literature is a much bigger part of pop culture — people go to midnight showings of Shakespeare's Richard III like it's The Rocky Horror Picture Show.

Thursday finds herself a bit out of her depth, however, when she discovers that she is able to "jump" into one of her favorite books, Jane Eyre. She has the unique ability, it turns out, to read herself into fictional worlds. This comes in handy when Jane is kidnapped from the pages of her own novel, and Thursday must go in after her in the hope of saving her fictional life.

If it sounds silly... it is. It's a very fun, slightly silly read. But it's also a beautiful love letter to one of the first major novels to have a woman as its narrator.

In Thursday's world, you see, the original Jane Eyre ends with Jane going off to marry St. John Rivers and join him as a dutiful missionary and... that's it. She capitulates. She never winds up with Rochester. It's a bland, non-revolutionary version of Jane Eyre.

Through Thursday's intervention, though (and Jasper Fforde's ingenius plotting), the plot-line gets shuffled around into the story that we all know and love: Jane's dramatic first meeting with Rochester, the fire at Thornfield Hall, Jane's decision to leave St. John and return to Rochester, despite his attic wife. The Eyre Affair is a fun, meta-fictional trip through Brontë's novel, but it also goes to show just how much of a break from the norm Jane Eyre was in its day.

In the world of The Eyre Affair, Jane has been forced to give up her independence to fill someone else's definition of what is right or "happy" (in this case, St. John's super imperial definition). But, with the help of offbeat heroine Thursday Next, Jane is freed to become the Jane we all know and love: a plain, fiercely passionate woman who refuses to let herself be caged.

So, if you love Jane Eyre and you don't mind venturing into a slightly silly version of reality, pick up The Eyre Affair. It's a brilliant homage to one of the great coming-of-age stories. It's a tongue-in-cheek celebration of self-made women everywhere.

It may not be the most dignified book ever written but, as Brontë put it, “I would always rather be happy than dignified.”