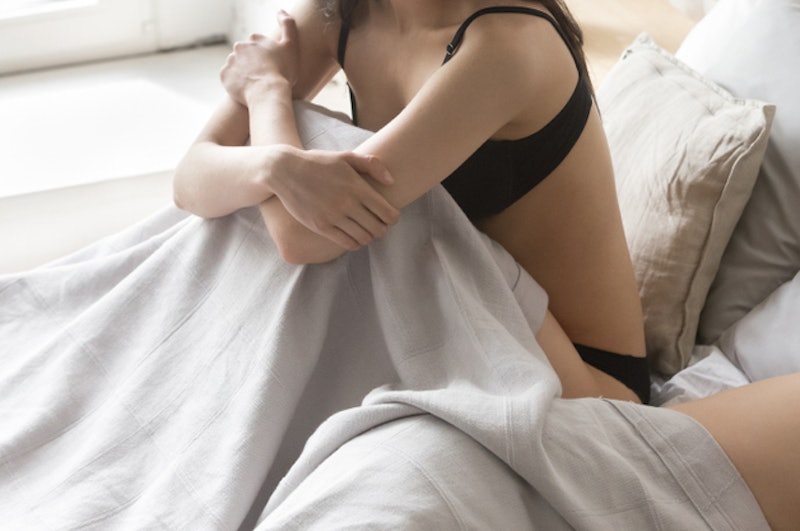 In June 2019, the U.S. Food and Drug Administration (FDA) approved a medication called Vyleesi to help treat hypoactive sexual desire disorder (HSDD) in premenopausal women. HSDD is classified in the Diagnostic and Statistical Manual of Mental Disorders (DSM) as a medical disorder characterized by a total lack of interest in sex and sexual fantasies, as well as a feeling of distress over that lack of interest. Vyleesi is the second drug for HSDD to come to market since 2012, when the FDA started encouraging pharmaceutical companies to address female sexual desire; Addyi was the first, introduced in 2015.

Vyleesi — which is the brand name for the drug bremelanotide — is taken via injection in the thigh or abdomen, 45 minutes before sex. It binds to melanocortin receptors in the brain, which we know contribute to skin pigmentation, metabolism, and pain intake. And while the exact mechanism by which it helps with sexual desire is still unknown, researchers theorize that it also helps with the release of dopamine, a neurotransmitter that contributes to a feeling of excitement.

There was a lot of excitement with the release of both Vyleesi and Addyi, with some news outlets even deeming one or the other "the female Viagra." But unlike Viagra, Vyleesi only works on a small percentage of people. The FDA used two 24-week, randomized, double-blind, placebo-controlled trials in 1,247 premenopausal women with acquired, generalized HSDD to approve the drug. They found that, while there was a slight increase in sexual desire and decrease in distress about sexual desire between the women who took the drug and those who took a placebo, there was "no difference" in sexual desire between treatment groups from the beginning to the end of the study and that Vyleesi did "not enhance sexual performance."

So what's going on here? On the one hand, we have people who are really excited about this drug. On the other, the results of that study don't sound too promising. Can it truly be a magic bullet to help women with low libidos?

Dr. Lauren Streicher, M.D., the Medical Director of The Northwestern Medicine Center for Menopause and The Northwestern Medicine Center for Sexual Health, tells Bustle that there’s a difference between low libido and HSDD — and that it’s important to distinguish between the two when talking about drugs like Vyleesi. For one, there are plenty of people who have low libido and aren’t distressed by that fact. Or, for example, a woman may experience pain during intercourse that leads to a loss of libido. “That’s not HSDD,” Dr. Streicher says. “That’s low libido because she has painful intercourse.”

So what about people who don’t have issues with their neurotransmitters and who instead are suffering from low libido? One option is to start seeing a sex coach.

Pam Costa is a sex and relationships coach based in California's Bay Area. In her experience, low libido “is often a self-diagnosed category” that means a person doesn’t have as high a libido as their partner. Those people likely don’t need a medical intervention in the form of a pill, but could benefit from a shift in their mentality about sex, Costa says. Working with the dual-control model — which is the idea that sexual arousal and desire are affected by both turn-ons and turn-offs, and if you have too many turn-offs, you’re not going to want to have sex — Costa starts by helping her clients uncover what might be keeping them from wanting to have sex.

“Many women received messages about sex that it is not okay to talk about sex, or that it can be dangerous to their health or reputation, or that it’s about procreation," Costa tells Bustle. "Our work then becomes to raise awareness about these [sex negative] messages and their unconscious impact on libido, and to find replacement messages. [We talk about how] 'It’s OK to talk about sex; it’s normal to want sex; and it’s OK to have sex for pleasure.’ With this new foundation in place, we can then explore the things that might make them want to have sex.”

Another Bay Area sex coach, Myisha Battle, also starts with the root causes of loss of desire. Her clients “experience low desire for a number of reasons,” with the number one being stress, and the number two being a lack of body awareness or difficulty advocating for their desires. And while she can’t prescribe medications because she’s not a doctor, Battle is open to the idea of medication like Vyleesi.

“I welcome any medication that can assist with low desire, while remaining skeptical of one approach being the solution,” Battle tells Bustle. “So far, there hasn’t been a drug intervention that can address the myriad reasons for low desire, a number of which are cultural and relational.”

Dr. Streicher — who can prescribe drugs like Vyleesi to her clients, but says “it remains to be seen” how often she will — is also of two minds about the drug.

“On the one hand, when I see a drug like this getting approved, I’m clapping my hands and saying ‘Yay!’ Dr. Streicher says. “This is increasing attention to female sexual dysfunction. This is starting the conversation. This is getting women in to have that full evaluation. But, on the flip side, we don’t want women who go to the doctor and they say ‘I have no libido,’ and the doctor says ‘I have the cure!’ and they write this prescription.”

Dr. Streicher worries that, in that scenario, women who don’t have actual HSDD will get medication that doesn’t work because it’s not actually addressing the reasons they don’t have a libido. She thinks there’s a risk not so much that people will be harmed by the medication, but that they won’t be helped by it.

But the potential for harm from the drug is also real. The list of most common side effects of Vyleesi is daunting: nausea and vomiting, flushing, injection site reactions, and headache. In fact, around 40% of the trial patients experienced nausea, most often with the first injection, and 13% needed other medications to treat that nausea. The trial also found that around 1% of the people who took Vyleesi had darkening of the gums, face, and breasts; a side effect that didn’t go away after treatment. That side effect was more likely to develop in women “with dark skin.”

More like this
How To Protect Your Digital Privacy If You Need An Abortion Post Roe v. Wade
By Kaitlyn Wylde
6 Abortion Advocates To Follow On TikTok
By Sara Youngblood Gregory
23 Abortion Funds In States With Trigger Bans To Donate To
By Emma Carey
What Mercury Retrograde Spring 2022 Means For Your Sign's Sex Life
By Nina Kahn
Get Even More From Bustle — Sign Up For The Newsletter