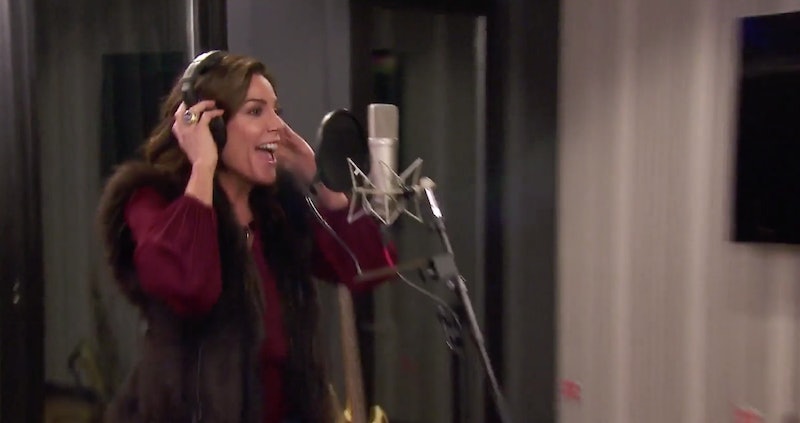 As much as the Real Housewives of New York cast denies it, life is a cabaret. At the very least, RHONY Season 11 is. Every conversation starts and ends with cabaret, which includes lots of sequin Jovani dresses. So many, in fact, that Luann de Lesseps even recorded a song inspired by the designer. Although the video for the single came out last week, this week on RHONY Luann recorded "Feeling Jovani" and she had a lot to say about what her friends would think.

During the June 20 RHONY episode, Luann recorded the song and she improvised a line about "losing your mind" when she was in the studio. In her on-camera interview, Luann remarked, "Well, I think I know one person who might lose their mind." And, yes, she was referring to Dorinda, something that the editors made very clear with a flashback to last season's finale, in which Dorinda heckled her friend by screaming "JOVANI" at her over and over again. That was Luann's first cabaret show and their relationship just hasn't been the same since. The two of them were beefing at the start of this season — and they've made up since — but they do not seem to be as close as they once were.

That Luann knew the song would rile them up is a testament to just how catty these ladies can be. While the song was obviously not just for Dorinda, it is also very much for Dorinda. Or anyone who doubts Luann's cabaret prowess.

During the most recent episode, Luann gushed over the new song. She shared, "This will be my fourth dance single and I'm so excited about it because when I say the name of the song to anyone they're like 'Nooooo.' They love it." Whether or not Luann is interpreting those "no" responses is unclear. But one thing sure is — at this point, the true winner in this feud is Jovani, who is getting a lot of free press, huh?

No one can blame Luann for capitalizing on the moment, but what about Dorinda? She is the one who started this whole thing.

However, Dorinda is over her association with Jovani. On May 24, Dorinda told Page Six, "They’re great, but I hope people think about my look being more evolved than that." The. Shade. She also said, "[It’s] something that I didn’t want to particularly own, but it was great for a night." Not only that, she has retired her Jovani looks. Dorinda concluded, "Let her have it. She wears it morning, noon and night." Well, Dorinda may be over the sequin gowns and jumpsuits, but fans can't help associating her with Lu's new song anyway.

Fans think Dorinda should get a cut.

Or at least a verse.

She must have an opinion.

As much as Dorinda is over the Jovani references, Luann is just getting started. During the episode, Luann summed it up by saying, "I just thought of 'Feelin Jovani.' It's more of an adjective than it is anything. It's not even Jovani anymore. It's just a feeling."

A feeling that Dorinda wants nothing to do with.