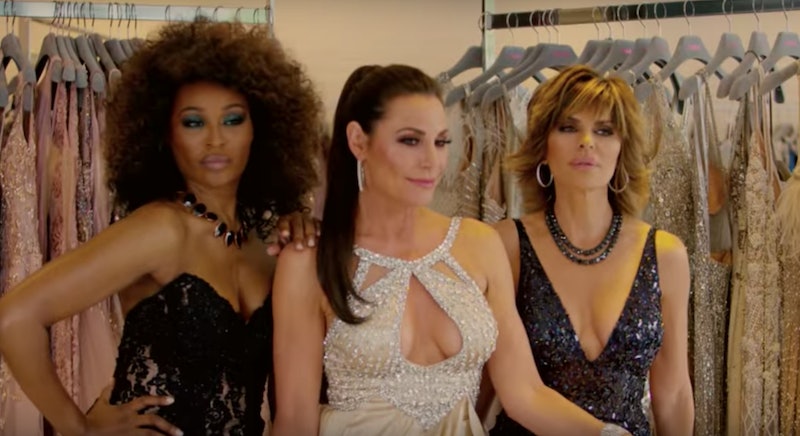 The Countess has done it again. On Thursday, June 13, Luann de Lesseps's "Feelin' Jovani" video and the song dropped, and wow, it was all so worth the wait. The single, which is a not-so-subtle reference to that one time Dorinda Medley screamed about the Jovani dresses Lu selected for her cabaret act, is her first since 2015's "Girl Code." Rejoice, fellow Luann fans (Lufanns?), because the wait for new Lu music is over. And the wait was worth it.

When we saw that snippet of Lu back in the recording studio and singing about how she's "feelin' Jovani" in the nonstop thrill ride that was The Real Housewives of New York City Season 11 midseason trailer, we knew our ears were in for something good. And then when People let us the RHONY star filmed a music video for her new tribute to Jovani evening gowns with The Real Housewives of Atlanta’s Cynthia Bailey and The Real Housewives of Beverly Hills’ Lisa Rinna? We knew we our eyes were in for something good, too. And now the music video is here in all of its Bravo crossover majesty. (*Clears throat* *Takes a big swig of some brown ice* *Musters up a Sonja Morgan impression* What are they doing here in a music video about Jovani dresses without Dorinda?)

The music video begins with Cynthia, Rinna, and Lu posing for photographs together in a dressing room. Comedian Murray Hill appears with a call box on a silver platter and presents it to the three Real Housewives. They have a call from Charlie, er, Andy Cohen. He wants to know how they are feeling. And they tell him they are “feelin’ Jovani.”

Like "Girl Code," "Money Can't Buy You Class," and "Chic C'est La Vie" before it, Lu's latest offering will make itself right at home in your brain and in your heart. You will spend the rest of the day humming that irresistible chorus. You will sincerely consider ordering a gold and black jumpsuit like the one Lu dances around in in the video. You will want to call into your local pop music station and politely ask the DJ to play "Feelin' Jovani."

Do not fight that impulse. Pick up that phone. Dial up as many radio stations as you see fit. Place that request.

And above all else, keep feelin' Jovani.