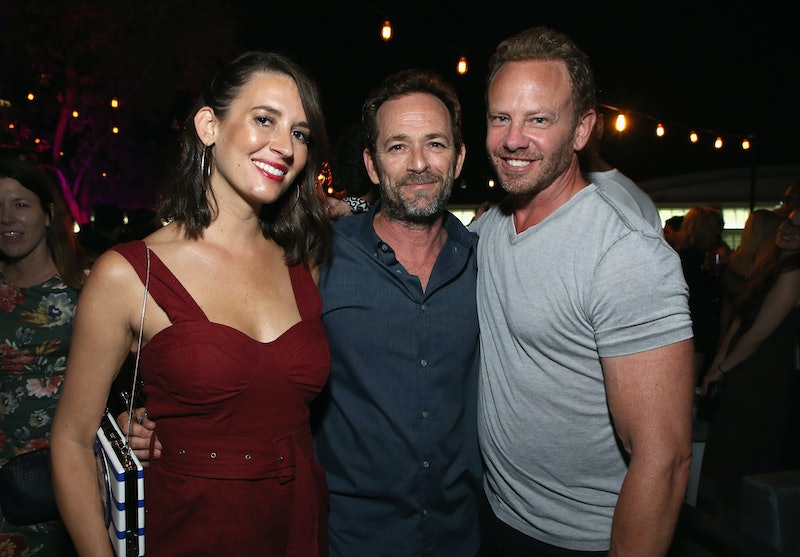 One day after his tragic, unexpected death at the age of 52 on March 4, Luke Perry's former Beverly Hills, 90210 costar Ian Ziering shared a touching story about his longtime friend via Instagram, as Us Weekly reported. Perry and Ziering worked together on the seminal '90s teen drama for nearly a decade, but Ziering's recent post makes it clear that their friendship lasted well beyond the show.

Back in October 2010, Ziering and his wife Erin announced they were expecting their first child together. "Erin and I are very excited to be parents. It’s something we both have always wanted," the star told People at the time. "[Erin] is four-and-a-half months along, and we both are beyond excited."

Not long after the couple revealed their happy news to the world, they decided to commemorate the moment by taking some maternity photos at their home, as per Ziering's recent Instagram post. Apparently, Perry was on-hand for the photoshoot as well, but his purpose there had nothing to do with pictures.

"The day Erin and I were shooting maternity pictures, Luke decided I needed a fenced in area to keep the baby safe in my backyard," Ziering wrote alongside a photo from that day, "Circa 2011," he added. In the pic, Perry is standing in front of Ziering — who's making a face that says something like, "I can't believe you're here right now building us a fence" —  and his wife, holding several parts of a white picket fence and grinning ear-to-ear.

That must have been such a special moment for the soon-to-be parents back then. When you're preparing for a new baby, there are a million different things you have to think about — especially when it comes to safety. At the time, Perry already had two kids of his own, and was clearly anticipating one of the couple's many, many pre-birth needs. So incredibly thoughtful, right?

In a statement to People on the day of Perry's passing, Doherty discussed the lifelong bond created by their influential show, as well as their plans to work together again in the future. She said,

"There is a special kind of love one has for each other when you are experiencing the journey we did on 90210 and of course life in general. Luke and I were working on show ideas for us. We wanted to work with each other again and create something special and meaningful for our fans at this stage in our lives. I will miss him everyday. Every minute. Every second."

There's been an outpouring of love and support for Perry and his family over the last several days. He clearly made an impact on all kinds of people over the course of his too-short life, and sweet stories like Ziering's will make sure his big-hearted legacy lives on forever.